Print a book in espresso time 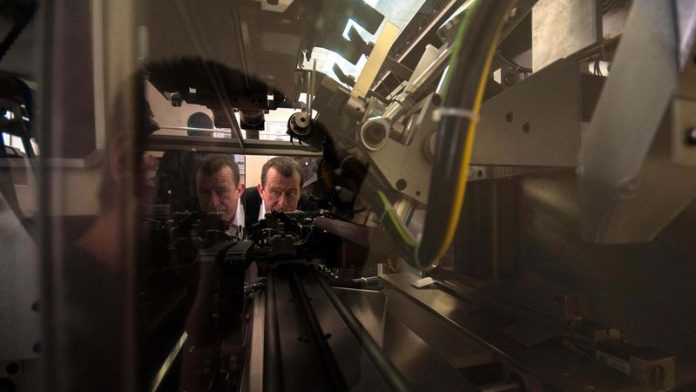 The Espresso Book Machine is not the most beautiful device you will ever see. It looks like a large, clumsy, see-through photocopier, which is sort of what it is. But it is a thousand times more powerful.

This speedy print-on-demand ­publishing gadget — which costs R1-million — can churn out a bound book, cover and all, in about the same time it takes to make an espresso.

And John van Heeswijk says it is the reason why no bookseller will ever be able to tell you a title is out of print. The founder of Self-Publish Press and the owner of the only machine of its kind in South Africa, Van Heeswijk boasts that he has access to a database of eight million titles.

“Anything you can’t find through traditional sellers, you could most likely find through us,” says Van Heeswijk of his machine.

Based at the library of the University of Johannesburg, Van Heeswijk has honed his market down to students and academics — and also to corporates and vanity publishers, who want to give out their own creations as gifts to family and friends.

“Self-Publish Press is in the business of enabling the thousands of book-lovers to produce a single book, whether it is a published title that is out of print or their own manuscript,” he says. “The students love this and I will expect them to be printing their ­theses and projects here.”

Van Heeswijk has already had some interest from the national ­education department, which is grappling with the problem of trying to get textbooks speedily delivered to schools around the country.

The Espresso Book Machine is the brainchild of United States publisher Jason Epstein, who describes it as an “ATM for books”.

It made its first public appearance at the New York Public Library in June 2007 and some commentators said it was as revolutionary as the Gutenberg printing press.

But even if it is not that revolutionary, it is still an impressive piece of technology. There are just 80 of the machines worldwide — three in the Alexandria Library in Egypt alone, which makes sense because this library houses the only complete copy and external backup of the world’s internet archives.

Although Andrew Hutchings, the chief executive of Blackwell Publishing in the United Kingdom, was quoted by the Guardian at the machine’s launch at the London Book Fair in 2009 as saying the machine would give smaller independent booksellers a chance to compete with the chain stores, with its R1-million price tag that is not likely to happen any time soon.

“We have some 50 stores and to roll out at a cost like that just isn’t feasible,” says Ben Williams, general manager of digital retail for the group. “Besides, Exclus1ves.co.za has roughly 16-million books in its catalogue that caters for, I would say, 98% of customer requests.”

Van Heeswijk is not stressed.

“I need to build a relationship with publishers, not retailers,” he says. And this makes sense, because  despite the potential for the machine, Van Heeswijk understands he is in “the 20 copies or less market”.

What all this means is that the publishing business is coming closer and closer to home. Because no matter how enticing digital is, if there is an article or an e-book that particularly moves me, I still feel the need to print it out. To have it on paper, as it were.

Besides, who does not want to be their own publisher?

A 150-page book costs R88 to print. The maximum the machine can do is 800 pages, which would cost R237. These prices exclude VAT and do not include any royalty or content fee that may be due