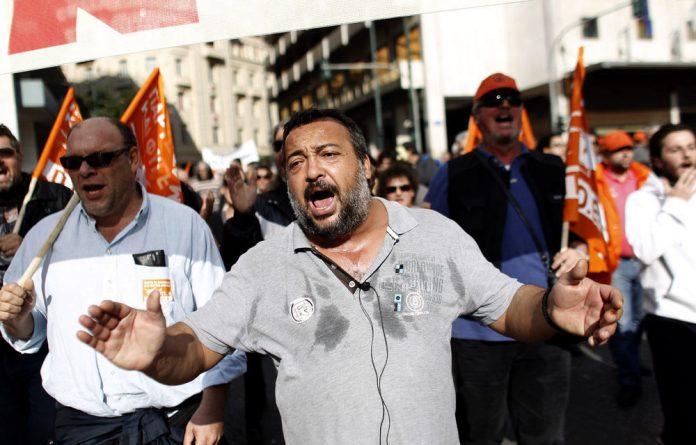 The parliamentary vote is a test of confidence in Prime Minister Antonis Samaras' three-party coalition government as it tries to steer the country through a debt crisis and out of a five-year recession.

A separate austerity and reform package, also a condition of resuming the bailout and unlocking more than 30-billion euros in aid from the International Monetary Fund and European Union later this month, was approved on Wednesday by a thin majority.

The government faces plummeting popularity, disagreements over policy within the coalition and violent protests outside Parliament but has used its majority in the assembly to push the difficult measures through.

"Today we must demand sacrifices so there is hope for future generations," Finance Minister Yannis Stounaras said in Parliament on Saturday. "Re-establishing our credibility is our only passport to recovery."

Greece's biggest private and public sector unions, representing around half of Greece's four million workers, will hold a protest outside Parliament against the budget at about 3pm GMT.

Samaras and his allies say the budget will put Greece back on track to meet goals agreed with its lenders. The leftist-led opposition says it will deepen a recession that has put one in four working-aged Greeks out of a job.

"For three years you have been going from bailout to bailout, rescue to rescue," said Panagiotis Lafazanis, a leader for the deputy caucus of the leftist SYRIZA. "You've already bankrupted the Greek people."

Lawmakers started debating the law at around 1PM GMT and were expected to vote at around 10pm GMT.

After abstaining from Wednesday's vote on the austerity package because it objected to labour reforms, the junior ruling Democratic Left party has pledged to support the budget.

It and its ruling partners — Samaras's New Democracy and the Socialist PASOK party — are expected to pass the budget in what will be effectively a confidence vote in their coalition with a majority of 168 of Parliament's 300 seats.

According to the budget draft, the Mediterranean state's economy will shrink for its sixth year running, by 4.5%.

The budget deficit will be 5.2% of gross domestic product (GDP), down from 6.6% expected this year. But once debt maintenance costs are removed, Greece will show a tiny surplus for the first time in decades.

These deficit figures assume Athens' lenders will extend a deadline for it to narrow it fiscal shortfall by two years in exchange for the new belt-tightening package.

The biggest cost-reductions next year are pension cuts of up to 15% for almost half the total 9.4-billion euros in budget savings and public wages cuts of 1.2-billion.

Greece's fiscal adjustment has hit workers more than the wealthy elite. This has become a sore point in the nation of 10-million, where media have published lists of bankers, lawyers, shipping magnates who they say moved cash to Switzerland.

"It's always the same. The poor pay and no one touches the rich and the tax evaders. Winter is coming and I can't afford heat," said 41-year-old housewife Angeliki Petropoulou.

EU and ECB officials say that means that Athens will not be able to reduce its debt to 120% of GDP by 2020, the level the IMF has said is the ceiling for debts to be sustainable in the long term.

That has triggered a debate on how to reduce the debt, which include discussions on cutting interest rates on Greece's official loans, letting the ECB give profits from Greek bonds it holds back to Athens, helping bail out Greek banks with the EU's EFSF rescue fund, and other measures. – Reuters