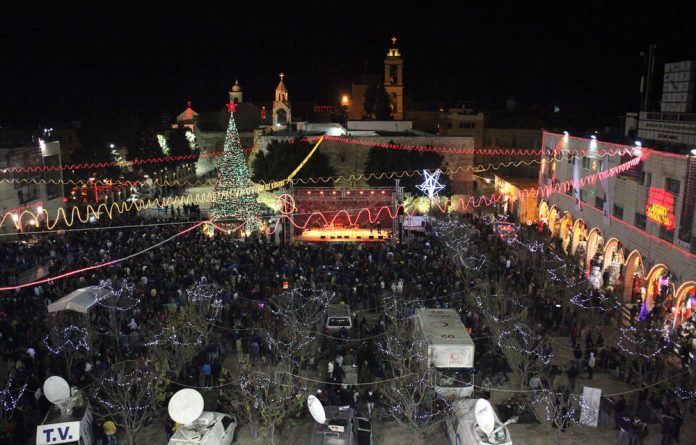 Thousands of people streamed into the West Bank city of Bethlehem to mark Christmas, as the Latin Patriarch urged "men of good will" to seek peace in the Middle East.

In Vatican City meanwhile, Pope Benedict XVI also prayed on Monday for peace in the region, including war-torn Syria, "that Christians in those lands where our faith was born may be able to continue living there, that Christians and Muslims may build up their countries side by side in God's peace".

Speaking in the traditional midnight mass in Bethlehem, where Christians believe Christ was born, the most senior Roman Catholic bishop in the Middle East appealed for regional peace and issued a special call for efforts to resolve the Israel-Palestine conflict.

"Only justice and peace in the Holy Land can reestablish balance and stability in the region and in the world," Patriarch Fuad Twal told a crowd packed into the St Catherine church, which adjoins the Church of Nativity.

For Palestinians, this year's celebration carries special significance, coming as it does after the United Nations granted them upgraded status, and the Unesco agency designated Bethlehem's Church of the Nativity a World Heritage Site.

"From this holy place, I invite politicians and men of good will to work with determination for peace and reconciliation that encompasses Palestine and Israel in the midst of all the sufferings in the Middle East," said Twal.

He urged the faithful to offer prayers for "our brothers and sisters in Syria, who are dying mercilessly… [and] the people of Egypt who are fighting for national agreement, freedom and equality.

Speaking in front of officials including Palestine's President Mahmud Abbas and Jordan's Foreign Minister Nasser Judeh, Twal praised "those who worked and continue to work for non-violence, peace and justice".

"Your efforts have borne fruit in the recognition of Palestine as a non-member observer state by the United Nations. This recognition should be a decisive step towards peace and security for all."

At the Vatican, on the eve of Tuesday's traditional Christmas Day blessing , the pope called for peace in Bethlehem "and all those places where the Lord lived, ministered and suffered".

"Let us pray that Israelis and Palestinians may be able to live their lives in the peace of the one God and in freedom," he added.

Earlier, under nearly cloudless blue skies and a surprisingly warm December sun, thousands of tourists and Palestinians – Muslims and Christians alike – lined the route to welcome the Christmas procession into Bethlehem.

Dozens of scout troupes of boys and girls from across the West Bank drumming and playing the bagpipes marched into Manger Square, where an enormous Christmas tree decorated with hundreds of red baubles stood behind a Nativity scene.

Taghreed Rishmawi (20), a biology student from Bethlehem watching the procession with a friend, said she felt Christmas was "particularly special this year because it comes after the UN gave us the state status".

"That decision gave us hope, and we feel that the world sees us as a state now."

In the weeks leading up to Christmas, the Palestinians have seen Israel speed up settlement activity, including around Bethlehem.

The Palestinians say the new settlement activity is intended to punish them for the UN upgrade, which was fiercely opposed by Israel and the United States.

Among those celebrating in Manger Square were also hundreds of foreign tourists.

"The expectations were between 10  and 15 000 foreign tourists coming into the city," Samir Hazbun, chairman of Bethlehem's Chamber of Commerce, said, adding that most of the city's 3 700 hotel rooms were booked up.

Canadian tourist Joan Cross (58) was beaming as she watched the procession.

"It's just magical," she said. "I've waited 20 years to come as a Christian pilgrim.

"My mum and I always wanted to come together, but she passed away aged 97 last year, unfortunately, so this trip is really for both of us." – AFP