A park with all the right answers 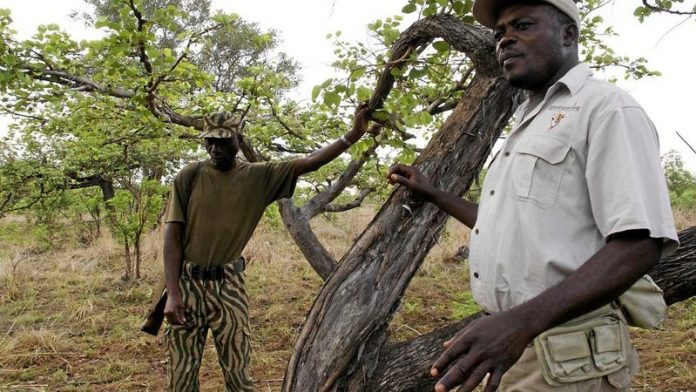 There are few greater pleasures than a morning walk in the African bush accompanied by your curious mind, a knowledgeable guide and a silent shadow with a big hunting rifle. It was clear from the introductory speech of our guides, Winston and Daniel, that only one of them was here to protect us from the wild. The other was aiming to protect the wild from us, a bumbling troop of urban dwellers prone to dressing and talking too loudly to pick up anything of real survival value.

Kafue National Park may be Zambia’s biggest wildlife park and one of the biggest wildlife sanctuaries in Africa, but it was definitely Winston’s back garden and no one was about to make any divots on his lawn. Luckily, something unnatural happens when you strip city folk of their BlackBerrys and job descriptions — they ask useful questions and actively listen to the answers.

It’s almost as if, in the bush, surrounded by the smallest irritations and the largest predators, our most basic animal instincts start sensing we are among enemies too cunning or camouflaged to count. So, yes, we ­listened as Winston shared his knowledge of macro issues, such as poaching and bush meat, and micro animals such as termites and elephant shrews.

What is it about being out in the African bush that makes flora and fauna so interesting? If my mom took me around her garden (and she has tried) and gave me the scientific names of every shrub and shrew that inhabited her land, I would neither pay her a compliment for her efforts nor a fee for her conservation.

But out here I hear myself asking the botanical name for the lucky bean tree (Erythrina abyssinica) and why you can pick up elephant dung but not warthog dung (they eat the dung of other animals, including carnivores) with the enthusiasm of a modern-day Rudyard Kipling doing research for another Just So story.

Spurred on by our rudimentary questions (What is the name of that bird? Why is there no bark on that tree? How old is that elephant dung?), Winston soon becomes a tableau of the knowledgeable guide, artfully picking up the skull of a small animal (a warthog as it turns out) or crouching down to hold dung in one hand and an explanation in the other.

Respect-for-nature philosophy
As I watch Winston more closely, I notice that no movement is ever superficial. Whether he bends over to pluck a medicinal leaf from the tree with his mouth (to avoid using his hands and possibly spreading the potent herb to his eyes) or carefully selects a dead termite mound to use as an educational opportunity, his every action supports his respect-for-nature philosophy.

This park may be his home but he never treats it as though it is his stomping ground. He is always careful to replace everything, be it bark or insect, in the shape and direction he found it, taking the opportunity to remind us of what our relationship with nature should be.

The bush walk marked the second day for our small group of South Africans. The allure of cool waters running through the bush had brought us to the shores of the great Kafue River after a night on Lake Kariba, just a few kilometres from the dam wall. We had treated ourselves to an unusual houseboat experience on Protea Hotel’s Southern Belle, one of the largest houseboats in Southern Africa and ­certainly the only one that will make you feel as if you are cruising down the Mississippi.

And if the name doesn’t make you adopt a Southern drawl, the grand staircase sure will, missy. There can’t be a dame on board who hasn’t had her Titanic moment looking down that sweeping staircase at the opulent gallery setting below.

Back in the bush, there was nothing immediately foreign about our experience as we walked through the park. The bush is what unites Southern African countries in a shared African identity. We know the sweet smell after the rains and we can identify the shape of our continent in the African elephants’ ears. But it’s not home. It’s Zambia and she has her own ways about her. Here, most of the acacias are tall and bushy and the impalas have a pale underbelly and answer to the name “puku”.

Language of silence
I am ashamed to say that it took several of these local examples to knock the annoying habit of comparative speaking out of us. By now Winston was well versed in the phrase “that’s the same back home”. He had heard it more than a few times on the river the previous night, during our sunset cruise.

Luckily, nature has a way of biting you in the ass or, in our case, the cheek, which was when Winston first introduced us to the tsetse fly. This was the one foreigner we weren’t expecting or wanting to come across, being well aware of its reputation for sleeping sickness. If I were Winston I would have waited a few more panic-stricken minutes before mentioning that the type of tsetse found in Kafue doesn’t carry the disease.

As it happens, Winston didn’t need to raise his voice for us to lower ours. A sunset cruise on the Kafue River, languidly weaving between pods of hippos while elephants keep pace along the river’s edge, has a way of taking your breath away and making you gasp all at once. Suddenly nothing compared with this moment and silence was a language we all wanted to speak very loudly.

Like Winston, what struck me about Kafue, and in some ways about Zambia, was the lack of pretension. The lodge we stayed at, the Mukambi Safari Lodge, didn’t market itself as “luxury” despite its prime position on the river, its carefully planned, homemade meals (they even made their own butter cookies) and elegant touches, from rosewood floors to oak dinner tables, but it was indeed a luxury just three hours from Lusaka.

I am sure I am in the majority when I say that a safari tent with a ball-and-claw bath on your private balcony overlooking the river is a luxury. But the entrance to the lodge is neither grand nor gabled, the pedigree pet is a local hippo called Basil, and even the personalised services of a knowledgeable guide like Winston won’t set you back more than $40 for a two-and-a-half-hour walk, talking action-packed safari.

So now, when I add this to the fact that it takes me less time to get from Cape Town to Kafue than it would to get to the Kruger by way of Johannesburg, I am inclined to think that I might not be visiting my Kruger cousins this winter.

I know a good man in Zambia who doesn’t mind me asking questions even Google can’t answer.

Getting there
Air Namibia flies from Cape Town or Johannesburg to Lusaka, via Windhoek, five times a week.

The Mukambi Safari Lodge offers several inclusive packages, starting at $225 per person sharing for a luxury safari tent and three meals a day.

A twin cabin and cruise on Lake Kariba costs $295 per person sharing and includes breakfast, lunch and dinner.