An app a day keeps the doc away 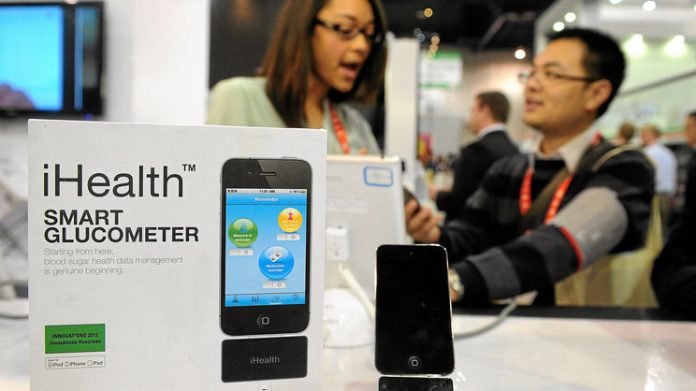 The Consumer Electronics Show, an annual innovation showcase that brings more than 100 000 industry professionals to Las Vegas and fills 172 000m2 of convention floor space, is traditionally a cornucopia of gadget prototypes for couch potatoes. At this year's show, alongside the usual array of computers, robots and giant televisions, about a quarter of the exhibits were related to health and fitness, selling the idea that technology is the key to mental and physical wellbeing.

It does not sound a promising combination: geeks tend to neglect health and fitness, Sin City discourages moderation and sense, and conferences are graveyards of diet and exercise. Yet companies and developers unveiled a parade of apps, accessories and gizmos to help you to lose weight, eat properly, exercise regularly, prevent disease, manage illness and banish infirmity. Believe the hype and it is a mystery how our species survived this long without technology.

"Everybody could benefit from this," says Philippe Monteiro de Rocha, an engineer with the French company Hapilabs, holding a fork. It's a prototype Hapifork, a piece of smart cutlery to help you to slim.

"It has a capacity sensor in the handle which monitors the speed you eat," he says. Eat too fast and the fork vibrates, reminding you to slow down. People feel full after 20 minutes of eating so if you eat less during that time, you're on your way to a thinner you. It's been an unexpected hit at the expo. The forks are due to go on sale in the United States soon for $99 and in the United Kingdom later in the year.

Among the thousands of products ranging from daft to useful or ingenious, the connecting thread is wireless technology, which uses smartphones and tablets to collect data about your body in real time.

"Everybody is trying to leverage this technology into the field of wellness," says Ryan Hruska, an engineer with Vancive, a Chicago-based medical technology company exhibiting a wearable sensor called the Metria. You put the small patch on your chest for seven days, during which it measures heartbeat, skin hydration, breathing, steps taken and sleep patterns, recording the duration and quality of sleep on the basis of how much you tossed and turned.

Adherence during drug trials
This information is sent using  Bluetooth and can be instantly tracked on a phone or tablet, meaning you can be on the other side of the world and check up on grandma's precise medical condition, says Hruska. "Many elderly people live on their own. This way you can make sure they're okay."

The disposable patch, which lasts seven days and can be worn in the shower, is due to go on sale this year for between $30 and $40. The US air force is considering it to monitor pilots. Drug companies could use it to observe subjects' adherence during drug trials. Insurance companies could, in theory, use it to verify medical conditions.

"It will become more difficult to lie to insurance companies but it cuts both ways. If you're taking medication as you should, you would be able to prove it," says Tim Ensor, a product developer with Cambridge Consultants. The British firm's wares include an algorithm that uses a bike, Bluetooth and a smartphone to calculate and adjust the gear for ­optimal efficiency.

Exhibitors hammered the message that smartphones and tablets could help to liberate us by processing medical data instantly and precisely. "Some diabetics need to test their blood sugar six to 12 times a day," says Joseph Martorano of iHealth, a California firm that has developed an app to record and store such information using one of the increasingly ubiquitous "cloud" services. Dozens of other companies such as Fitbit, Fitbug and BodyMedia vied to show "wearable" fitness devices you can strap around your wrist or ankle to record, it seems, every pore that opens.

If information management alone could deliver health and fitness then soon we would all be athletes. Sadly there is no app for willpower. There is, however, a gadget you can strap around your head to harness your brainwaves. "You just have to concentrate," says Steve Castellotti, the founder of PuzzleBox, snapping a black band around my head. A sensor node rests on my forehead, a device is clipped to my ear. Castellotti taps on a computer. "Ready."

My brow furrows, my eyes squint and hey presto, a toy helicopter buzzes upwards, controlled by my thoughts. The device works by measuring brainwave electroencephalogram and heartbeat electrocardio-graphy. Seconds later the helicopter plunges. I lost concentration.

The point of the software, says Andrea Shukis of NeuroSky, which has partnered with PuzzleBox on the brain-controlled helicopter, is to teach the value of concentration and focus. "You can use it to teach children and to help adults keep their brains active."

Who would have thought: Las Vegas, the temple of indulgence, showing us how to eat less, monitor health and exercise willpower. – © Guardian News & Media 2013