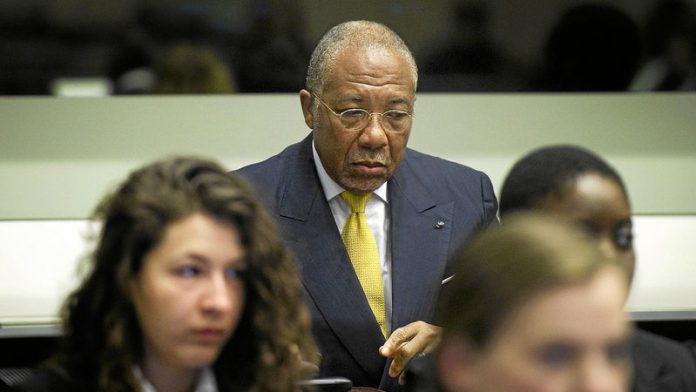 Taylor, wearing a black suit, white shirt and red tie, listened intently as the prosecution began its appeal at the Special Court for Sierra Leone, headquartered in Leidschendam outside The Hague on Tuesday.

The court should "hold responsible not only those who perpetrate the crimes but also those who promote them", said prosecutor Nicholas Koumjian.

"They are just as important, including the lords of war who sell arms in these conflicts," he said.

The court's sentence last May against Taylor (64) for "some of the most heinous crimes in human history" was widely welcomed around the world at the time.

But prosecutors argue that trial judges made a mistake by only convicting Taylor of aiding and abetting the notorious Revolutionary United Front and other rebel groups.

They say the court should have convicted Taylor for actively issuing orders to the front and its ally, the Armed Forces Revolutionary Council.

Taylor was convicted of aiding and abetting terrorism, murder and rape, committed by the Revolutionary United Front, who waged a terror campaign during a civil war that claimed 120 000 lives between 1991 and 2001.

The initial trial, which saw model Naomi Campbell testify she had received a gift of "dirty" diamonds, said to be from the flamboyant Taylor, wrapped up in March 2011.

His sentence was the first handed down against a former head of state in an international court since the Nazi trials at Nuremberg in 1946.

Possible 80-year prison sentence
Koumjian said that as a result, the trial is "of great consequence".

Tuesday's hearing was dominated by particularly complex legal arguments – with both sides saying judges made legal mistakes in convicting Taylor in April last year and sentencing him in May.

The prosecution wants Taylor jailed for 80 years "in order to reflect the totality of his overall conduct and culpability".

The prosecution attacked Taylor's lawyers, who they said would argue that the former warlord had merely benefitted by obtaining blood diamonds.

"In their view as long as their purpose is not crimes, but advantages, in the case of Charles Taylor the diamonds of Sierra Leone, then it's OK, they're not responsible for aiding and abetting," Koumjian said.

"That would be a great step backwards in international law."

Sources during the trial
Taylor's defence has filed 42 grounds of appeal, calling the trial chamber's decision a "miscarriage of justice", and asked appeals judges to reverse the conviction and quash the sentence.

"The colossal judgement, over 2 500 pages in length, is plagued throughout by internal inconsistencies, misstatements of evidence and conflicting findings," Taylor's lawyer Morris Anyah said in court papers.

Taylor's lawyers say that many of the 94 prosecution witnesses who testified during Taylor's nearly four-year trial provided "uncorroborated hearsay evidence".

Taylor, said Anyah, "was never in Sierra Leone when these crimes were committed" and furthermore he was so "engulfed at the time in many other domestic issues that it was not possible for him to be leading rebels in other countries to fight wars".

But special court for Sierra Leone chief prosecutor Brenda Hollis told the six judges that the trial chamber relied not only on hearsay evidence, but on multiple other sources during the trial.

"There has been no showing that the trial chamber relied solely on uncorroborated evidence as a basis for this conviction," she said.

Appeals judges are expected to have a decision by September, with the Liberian ex-president remaining behind bars at the UN's detention unit in the Hague until appeals proceedings are finalised.

If his appeal fails, Taylor will serve his sentence in a British jail. – Sapa-AFP