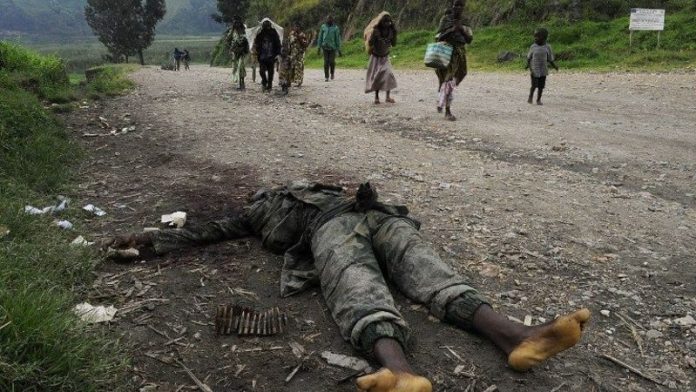 Meanwhile, peace talks take place in Uganda under a ceasefire.

The rebel movement of March 23 (M23) controls part of the Rutshuru region, an unstable territory in the Democratic Republic of Congo, rich in minerals and agricultural produce, which borders on Rwanda and Uganda. Both countries are accused by the United Nations of backing M23, but they deny it.

Since taking control of the territory in North Kivu province, the rebels have begun raising taxes and, according to recent accusations by civic leaders, naming their own tribal chiefs in place of the legal traditional leaders, some of whom have fled.

"In the Buhamba sector … Mr Makombe, the traditional chief recognised in law, has been replaced by Mr Rusisi, who escaped from the Munzenze prison in Goma", the provincial capital occupied by M23 for 11 days at the end of November, said Etienne Kambale, of the federation of civil society non-governmental organisations in North Kivu.

"Do you believe that people who place a criminal at the head of a sector are … serious?" he asked.

A source close to Makombe gave a different slant on the handover. "Makombe, for security reasons, chose not to remain in a zone under rebel control. There are people thirsty for power who are looking for us," he added, blaming M23 and asking not to be named.

M23 tax impositions
The divisional chief responsible for the interior of North Kivu, Aloys Majune, declined to comment. "This is a rebellion. We can't say anything," he said. "These tribal chiefs do their work and we do our own," replied Jean-Marie Runiga, the political leader of M23. "We can't leave a population without leaders. To say that M23 is shifting traditional power is propaganda … these are things that we would never do."

Benjamin Bonimpa was named administrator of Rutshuru after the rebels seized their part of the territory last July 25. The legal administrator, Justin Mukanya, for his part runs a "free" part of Rutshuru, bordering on the Lubero territory.

The main demand of M23, which has bases close to Goma, is the implementation of a peace accord signed on March 23 2009, which provided for the integration of its men into the army, when they were part of a previous rebel movement.

Negotiations to end the crisis began at the start of December in the Ugandan capital Kampala and clashes with the army have finished, but M23 has not put an end to the raising of taxes. The movement even uses official forms of the General Tax Directorate, to which it has added its own insignia, a local businessman said.

"In security terms, we say that M23 is doing its best [to improve the situation], but what we detest is the payment of customs duties on our merchandise. How do you expect us to pay customs on goods that come from Goma? In the DRC? This is a joke and it discourages us," a trader named Janvier said.

"We pay 40% of our income to M23 every day. … For our vehicle, there's a toll fee of $5 and for free passage, we pay $5 to M23's traffic police," said an official in the Association of Road Haulage Drivers of the Congo (Acco) in Rutshuru.

"These taxes do not help us. You see, Ugandan truckers who came to buy our soya no longer come and a bag of soya is now worth $18. What are we expected to earn as farmers?" said an official in charge of a Rutshuru food market.

"We take ordinary customs duties and taxes. It's just the same as in the time of the government," Runiga said in defence of M23. "The same taxes are still received by us for three reasons – security, the upkeep of the administration and road repairs." – AFP