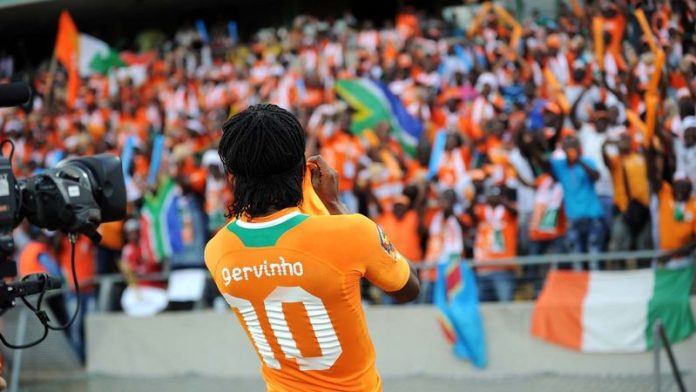 Gervinho is a riddle wrapped inside an enigma, surrounded by a forehead. Few forwards in the world are as mercurially elusive on the ball. But none of those rivals are as exasperatingly erratic in their decision-making.

The Arsenal star rustles up space and chances with ease, then usually contrives to strike the ball poorly, or at the wrong moment. He scuffs it or skies it, or pokes it gently into the arms of the keeper, or squares it unselfishly to nobody in particular. Gervinho's club form fell through the floor after a bright start to this season and he has now become a sort of comical emblem of the Gunners' growing flakiness. The regrettable hairdo does not help.

A blogger recently noted that he does make the right decision once in a while, in the same way that an insane person occasionally says something perfectly sensible.

But on a balmy Tuesday evening in Rustenburg, the little Ivorian hit back with menacing sanity. And the Togolese defence did not have the time or oxygen to find him funny. Gervinho was focused, calm and inventive.

Raiding freely from either flank, he reminded us why he sports a Brazilian nickname by pausing on the edge of the box to feint, double-feint, triple-feint as he plotted his next move. His light, sparkling stride was exhilarating to watch. He seems barely to touch the turf as he dances past stodgy, muscle-bound ­defenders. It figured that the match-winning finish he supplied from Yaya Touré's free kick was a maverick one, volleyed home with the outside of the boot from an acute angle at the far post. That wayward instep was not required.

In the mixed zone after the game, Gervinho was swamped by a scrum of reporters and wide-eyed gatecrashers desperate to be photographed in his company. Small and slight, he seemed bemused and uncomfortable amid the adulation, like a nerd who inexplicably finds himself on a date with the prettiest girl in school.

Impressive campaigner
Gervinho's timidity off the pitch is hard to reconcile with his zany, irrepressible exuberance on it. But all those dodgy final touches probably have something to do with that paradox. It is not just a technical deficiency. He has exceptional ability, but seems to lack the self-belief to control and refine it fully.

But he is only 25, still young enough to take proper command of his gift. Arsenal will do fine without him. Gervinho should savour this adventure in the sun. And he has more say in its duration than he probably cares to think about.

Gervinho's razzmatazz aside, it was an average Elephants outing against Togo, with Touré the only other impressive campaigner. Didier Drogba looked ring-rusty and the centreback duo of Souleymane Bamba and Kolo Toure did not convince. But Elephants coach Sabri Lamouchi will not be too alarmed by their leisurely start as it is not a bad idea to save a bit of gas for the knockout rounds.

As their campaign builds up steam, Gervinho's capacity to deliver the unorthodox will be critical. There is an abundance of forward talent at Lamouchi's disposal: Wilfried Bony has netted 16 goals in 18 appearances for Vitesse Arnhem this season and is considered the best player in Holland, but he is a bit-part player for the Elephants, whereas Lacina Traoré would walk into any other starting eleven in the draw. Didier Drogba's position is beyond challenge.

And Gervinho, though his recent scoring rate is poor, is guaranteed a start. His creative X-factor is prized by his captain and coach. And it will be needed tomorrow at the Royal Bafokeng Stadium when

the Ivorians return to the fray against Tunisia. The unfancied Carthage Eagles have been buoyed by Youssef Msakni's artfully curled winner against Algeria in their first outing.

Striker Issam Jemaa's injury will blunt the Tunisians' attack somewhat, with his deputy Hamdi Harbaoui of Lokeren not quite up to international scratch. But talented number 10 Oussama Darragi's promising second-half outing against the Algerians, along with Msakni's scorcher, bodes well for Sami Trabelsi's well-organised troops. They will give the favourites just as fierce a challenge as Togo did.

With the pressure off Chelsea, thanks to their third-place finish, Arsenal need their manager to inspire a composed performance.
Read more
Sport

A year on from moving to Manchester United, Alexis Sanchez has become little more than an afterthought in the Red Devils’ revival
Read more
Sport

Emery finds it hard to put case for Gunners defence