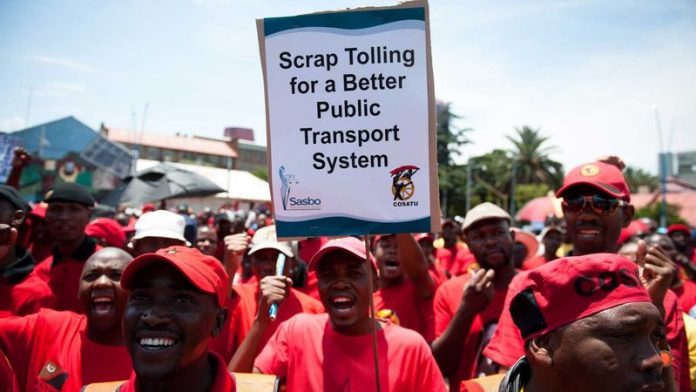 "Cosatu in Gauteng note that the e-tolls have not been scrapped by government since our last demonstration," Cosatu provincial secretary Dumisani Dakile told reporters in Johannesburg.

"Therefore … the campaign to occupy the highway and massive demonstrations will continue," he said. The protest would commence on February 11.

"We are going out … we will occupy freeways on that day." He said the action would be carried out in other provinces to ensure it became a "national act".

The second protest would be held on February 25, the same day as the opening of the Gauteng legislature.

"People there [at the opening] were invited to wear suits and ties. We will wear t-shirts and demonstrate with the workers, we will fight for the scrapping of e-tolling."

'A taste of what is to come'
The third protest would be held on March 7, the anniversary of Cosatu's nationwide strike against e-tolling and labour broking last year.

"There must be a stay away on that day. The country must come to a standstill." Dakile said the protests last year were "a taste of what is to come".

"Even if it means that there must be action every week … until government listens to us we are prepared to do so."

On Friday the North Gauteng High Court granted the Opposition to Urban Tolling Alliance (Outa) leave to take the matter to the Supreme Court of Appeal in Bloemfontein.

Outa had applied to appeal a December 13 2012 judgement which dismissed its bid to have the electronic tolling of Gauteng's major roads scrapped. – Sapa