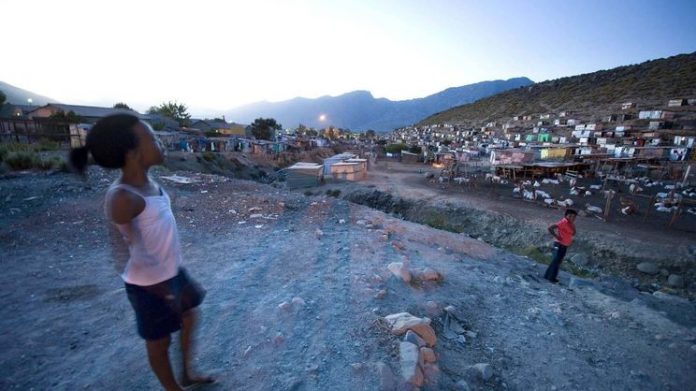 With their now notorious minimum wages of R69 a day not enough to make ends meet, some Western Cape farmworkers subsist on little else but black coffee during the last few days of each month.

Women are the most likely to go hungry, as they are paid less than men and have less stable work. Many farmworkers' children, who often grow up in single-headed households, don't have enough to eat and are thus vulnerable to a variety of infections and diseases. Stunted growth is not unusual: a study done by the University of Cape Town in the 1990s showed that farmworkers in the province are, on average, an inch (2.5cm) shorter than city dwellers.

After months of intermittent strike action across the province's fertile farmlands, the rallying cry against low wages is well known, but the effect of the resultant poverty less so. In addition to food insecurity, inadequate housing, alcohol abuse, gender inequality, poor service delivery and harsh working conditions all lead to troubled health – indicators both indicative of, and further straining, an already stressed community.

The Western Cape farmlands' distinctive history helps to account for the state of farmworkers' health. The results of several studies and surveys show that the province hosts the highest rates of "risky alcohol use", as well as the highest rates of violence and trauma associated with such use. This stems in part from the infamous dop (tot) system, in which wine farmworkers were historically partly paid in wine, fuelling alcohol dependence.

"The rural parts of the Western Cape have a big problem with alcohol, which is partly historical and partly circumstantial," says Lesley London of the University of Cape Town's school of public health. "It's well recognised that alcohol is linked with interpersonal violence, and many of the rural hospitals have to deal with heavy trauma burdens."

Women are particularly vulnerable, with high rates of gender-based violence across farmworking communities. A 2004 draft paper by the Western Cape department of social services and poverty alleviation estimates that alcohol abuse accounts for up to 60% of violent incidents resulting in trauma in the province.

Alcohol abuse, violence and food insecurity are not the only things troubling these communities. Although tuberculosis (TB) is rampant across South Africa, farmworkers in the Western Cape have historically fared far worse.

"TB is rife in the Western Cape," says London. "We have rates that are astronomically high."

Benevolence
Although the onset of HIV has fuelled the TB epidemic countrywide, with 70% of those infected with the bacterium being HIV positive, "the rates among farmworkers were high before the HIV epidemic arrived", says London, who notes that HIV rates are lower among Western Cape farmworkers when compared with the rest of the country.

Though there is no clear reason for this trend, London explains that "[TB] is transmitted through close contact, and farmworkers live in close quarters. TB is a disease of poverty, and that's where poverty lies."

Colette Soloman, acting director of the non-governmental organisation Women on Farms, says that farmworkers, especially women, are rarely given adequate protective clothing and equipment, or provided with a place to wash their clothing, both of which are required by law. Farmworkers living on farms are often housed close to sprayed crops, and complain of breathing problems and skin lesions.

When care is needed, it's hard to get. With services far away and hard to reach, farmworkers often rely on the benevolence of their employers to give them time off work and transport to the clinic.

"Farmworkers generally live on [farms] so their access [to places]off the farms is often quite dependent on the employer," says London. Mobile clinics that have helped to serve hard-to-reach areas have been largely discontinued as part of healthcare reforms.

Soloman says that farmers exploit their relationship with their labourers in other ways. Given that many farmworkers live on the farms themselves, they are dependent on on-the-farm stores for food. Many farmworkers and NGOs accuse farmers of pricing foodstuffs higher than commercial shops.

Food insecurity
This, compounded with low wages, further promotes food insecurity. "Prices in rural areas are always slightly higher than they are in urban areas. So if farmers are charging more than the market price, which is already high, farmworkers just can't afford food," says Soloman, and explains that average household income is R1 500 a month. "Many farmworkers buy on credit, but the prices are so high that … when they get paid, they have to pay their debts back and basically don't have money left."

A farm healthworkers' project, facilitated by the Western Cape department of health, is attempting to address limited access by training one farmworker per farm as a nurse assistant, who can then provide basic services, including medication for chronic diseases, to their fellow workers, referring them to clinics or hospitals if need be. But this project is in its infancy, and farmworkers are limited in the services they can provide.

Even when care is given, Soloman says, it is far from adequate. "Disproportionately, farmworkers have a lower quality of healthcare than your typical average urban dweller … because farmworkers also face very particular and specific ­discrimination by healthcare professionals," she says.

"They're spoken to disrespectfully, their privacy and dignity is not respected. Qualitatively, their experience of healthcare is much lower than that of an urban dweller."

The already stressed health of farmworking communities was put under further strain during the on-and-off months'-long strike.

As a result of healthcare workers' being threatened and attacked by striking workers, the Western Cape health department closed four facilities and halted community-based services in the Cape Winelands District Municipality until the safety of staff could be assured.

According to Jo-Anne Otto, principal communications officer for the municipality, these were the first such closures in at least a decade. "It's a huge thing for healthcare staff to be threatened by their patients," says Otto. "In my time here, I've never seen clinics close as a result of staff being threatened. It's a definite shift in attitude."

Otto says that despite the department negotiating with unions and the community to ensure access to services throughout the strike, clinic staff were still targeted. She hopes such closures can be avoided in the future through further negotiation. "No one wants to close a clinic, ever," says Otto. Emergency medical services, including ambulances and hospitals, remained operational, with clinic staff redeployed to emergency services to help cope with the extra burden.

Treatment interruption
As a result of clinic closures, patients and doctors reported treatment interruption for patients on chronic medication. Residents from De Doorns in the Hex River Valley –which was the epicentre of protests, and where seasonal workers are threatening renewed strike activity – told the Mail & Guardian they could not receive urgent medical care.

People were also afraid to access health services, with talk reverberating across communities that police were waiting outside medical facilities to arrest striking workers. Otto says that such claims are unfounded, but did note that if ambulances could not access patients or a medical facility, patients would be transported in a police car, which could have created confusion.

Yet a doctor, who asked not to be named, said that four patients were arrested after being discharged from Worcester Hospital.

Regardless of their validity, these whisperings had an impact: nearly every farmworker the M&G spoke to in De Doorns said they were warned against seeking treatment for fear of arrest.

Lutho Qokohe, 31, who was shot four times by police, heeded these warnings. Two weeks after sustaining injuries, he had still not sought medical care, despite his wounds being yellow and crusted, and a bullet being lodged in his right thigh. He could not straighten his right leg, nor walk properly.

Unfounded
There were also scattered reports of patients receiving inadequate care if they were assumed to be involved in the strike. Indira Govender, a medical doctor assisting communities during the action, says she saw doctors yell at a 13-year-old boy, shot by rubber bullets, "accusing him of throwing stones and telling him that he will be in jail before the age of 15."

Despite numerous requests for comment, the police had not responded by the time of going to press.

Govender says that the 13-year-old patient and three others, also shot with rubber bullets, were only given paracetamol for their injuries.

Otto says that these claims are unfounded. "In the light of the nature of the injuries and our commitment to serving all patients who need care, it is unlikely that anyone was refused care," she says.

Soloman hopes that the strike has helped to raise public consciousness about the lives and livelihoods of farm workers. As she recounts stories of those she knows who drink black coffee to keep their hungry stomachs quiet at month end, Soloman says "it's an immoral perversion that people who are producing food are the ones who don't have food, and who's children go to school hungry … It's invisible hunger and almost normalised, and something that the ­majority of the South African population is totally unaware [of]."