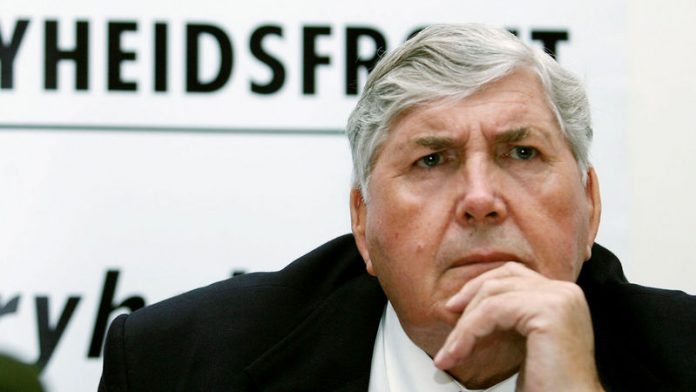 From humble beginnings as a farm-to-farm fertiliser salesman, Luyt rose to become a multi-millionaire and a national figure, stirring controversy every step of the way.

Born on June 18 1932, in Britstown, in the Cape, he worked his way up in the fertiliser business to head his own company Triomf Fertiliser.

He became a "super-Afrikaner" fraternising with the political bigwigs of the day, among them Bureau of State Security head General Hendrik van der Bergh and Prime Minister John Vorster.

He fronted an assault on the English newspaper group SA Associated Newspapers to get control of the apartheid government's bugbear, the Rand Daily Mail, and when this failed, launched The Citizen in the mid-70s.

He later swore he had no prior knowledge of the secret government funding of the newspaper.

Luyt also invested heavily in a brewing venture, but when both his Louis Luyt Breweries and Triomf went to the wall, he turned to rugby full-time in what one journalist called his "quest for power".

During this period, he came under attack for his administration style and efforts to make the sport professional.

He was accused of nepotism, using bullying tactics, and of autocratic administration.

In 1992, Luyt clashed with the ANC when he chose to play only the Afrikaans section of the national anthem at the Springbok rugby Test match against the All Blacks at Ellis Park stadium.

Despite these problems, Luyt played a crucial role in ensuring the national squad's re-entry into the international arena.

His major contribution was in 1995, to facilitate the Springboks' capture of the Rugby World Cup.

Luyt became infamous for his role in the court case involving President Nelson Mandela, when he was a hostile witness in a commission of inquiry into Sarfu affairs.

Gradually, people – including his former son-in-law Rian Oberholzer, who was the Sarfu MD – distanced themselves from him.

This resulted in Luyt's sacking as Sarfu president in May 1998.

Luyt then ventured into politics with the Federal Alliance (FA), which he personally financed. His stated purpose in forming the party was to protect the rights and integrity of Afrikaners.

The FA took part in South Africa's 1999 elections, and in 2000 it merged with the Democratic Party, which became the Democratic Alliance. However, Luyt later associated the party with the Freedom Front Plus.

Luyt served as a Member of Parliament for two years. He was also a member of the Judicial Services Commission.

In his book, Walking Proud, Luyt revealed that his birth name was Oswald Louis Petrus Poley, but that he took the surname of his stepfather Charles Luyt when his mother remarried, to become known as Louis Luyt.

He was married to Adri, and the couple has four children.