Rot sets in at Rotten Row 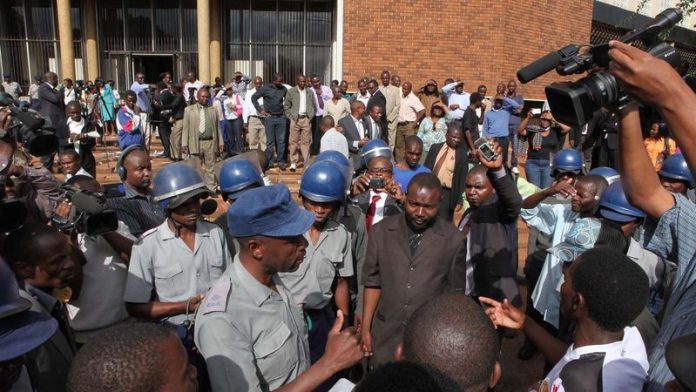 Corruption at the Harare Magistrate's Court, also known as Rotten Row, has become so rampant that officials from the Anti-corruption Commission are now permanently stationed at the court to monitor and investigate the conduct of prosecutors, magistrates, lawyers and court officials, the Mail & Guardian can reveal.

A commission source told the M&G that it now has staff working at the court because of the large number of complaints regarding court officials who are allegedly taking bribes, destroying dockets or continuously postponing cases until the matters are thrown out.

The source said the presence of the anti-corruption officials is resulting in arrests and prosecutions. However, their work is being complicated by the fact that the majority of corrupt deals are being cut by suspects, prosecutors and magistrates outside of working hours.

Lawyers who spoke to the M&G confirmed that court officials at Rotten Row have tried to solicit bribes from them.

A lawyer with a Harare firm, who did not want to be named, said magistrates are not shy to ask for bribes and openly advise "how much they charge to throw out a case".

"What is worrying is that there is no more justice at the courts," he said. "At one point, a magistrate at Rotten Row court invited me for lunch and said he would charge no less than $3 000 to throw out my client's case."

"Taking our cases to Rotten Row is just a formality; we just go there in the hope that after we lose we can appeal to the high court, where justice is guaranteed if the matter isn't political," he said.

Officially opening the high court's 2013 legal year, Chief Justice Godfrey Chidyausiku openly acknowledged the presence of corruption within the judiciary. He said there is "no need to point fingers at each other" by comparing levels of corruption "within the judiciary against those in the police, prisons or attorney general's office and boast that ours is much better", he said.

Chidyausiku bemoaned the poor conditions of service for judicial officers, saying their morale is low and that this, perhaps, is contributing to corruption.

A strong stench greeted the M&G during a recent visit to Rotten Row court. Poor sanitary conditions prevail at the court building, with only 10 toilets functioning out of 35 that are meant to serve hundreds of witnesses, suspects, magistrates and prosecutors.

Law Society of Zimbabwe president Lloyd Mhishi told the M&G that the society has been making a lot of "noise of late" over corruption within the judiciary.

"It has permeated the whole system, [including] lawyers, prosecutors and police, and even magistrates. It's more like a syndicate," he said.

Serious measures
Mhishi said the society is "taking serious measures" to deal with members who are accused of wrongdoing. He would not specify the steps that are envisioned.

He partly blamed the corrupt activities on the economic meltdown the country went through in 2008, saying that members had "discarded legal ethics" during that period.

When contacted for comment on the situation at the court, Justice Minister Patrick Chinamasa did not answer his phone.

Since the beginning of last year, the number of court officials appearing in court for taking bribes appears to be on the increase.

An Anti-corruption Commission employee stationed at Rotten Row said the unit has been setting traps at the court. Information obtained from the commission's records and various magistrate's courts shows that:

o Last year Relaxon Mandizvidza, a magistrate at Rotten Row, was arrested and convicted after the commission caught him collecting a bribe from a complainant;

oAlso in 2012, Moffat Makuwatsine, a prosecutor, was caught by commission officials while he was collecting a $500 bribe;

o A soldier only identified as Masundire, who had been seconded to the courts, was nabbed by the commission for collecting a bribe last year;

oAuxilia Mangwaira and Rosewetter Mudembu, both prosecutors at Rotten Row, were caught receiving bribes thanks to commission officials and were each sentenced to two years in prison;

o Sibanengi Ncube, a former area prosecutor for Mbare in Harare, was convicted for receiving bribes and was discharged from service in 2012;

o Magistrate Tawanda Mudewu appeared last year in a Kwekwe court in the Midlands province for the criminal abuse of office;

o Vincent Chikombe, a prosecutor based in Kwekwe, was jailed for four years last year for receiving bribes to get rid of cases;

oPlumtree magistrate Stephen Mavuna appeared in court last November on charges of the criminal abuse of office. Dockets had allegedly mysteriously disappeared when in his custody;

o Augustine Borerwe, a Bindura magistrate, also appeared in court for the criminal abuse of office.

The Anti-corruption Commission was set up in 2005. Falling under the ministry of home affairs, it has been given the power to conduct independent investigations and direct police to investigate cases and to make arrests.

Last February, more than 60 magistrates from various courts were reshuffled by the chief magistrate to other courts around the country in an effort to combat corruption.