Remembering Anene Booysen: The sound, the fury and the politicking 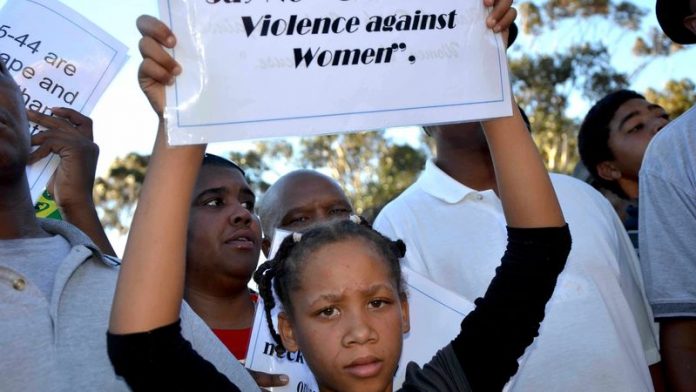 A day after Booysen’s funeral was attended by family and close friends, community members gathered for the murdered teenager’s public memorial service in Bredasdorp on Sunday. Instead of personalised messages of remembrance coupled with a display of overdue political will towards addressing the scourge of gender violence in South Africa, some of the addresses by politicians eventually descended into opportunistic political point scoring.

Thousands of people from Bredasdorp and surrounding towns such as Napier and Arniston packed out the local Nelson Mandela community hall and adjacent tent that had been erected for the occasion. The programme showed that messages of support would be given by political organisations such as the ANC, Cosatu, ANC Women's League, ANC Youth League, the Democratic Alliance, South African Communist Party and Commission for Gender Equality. There were no nongovernmental organisations on the list. Also conspicuous in its absence was the name of a speaker on behalf of the family.

Not long after Booysen’s foster mother, a demure Corlia Olivier, and her family took their seats in the front row, mayor of Cape Agulhas municipality Alderman Richard Mitchell opened the proceedings by lamenting the fact that, "Our community is now known in a way we don’t want: as a violent community." Cape Agulhas municipality speaker Eve Marthinus added a Safe House would to be built in Bredasdorp and that it would be named after Anene Booysen.

In a rousing address, Cosatu's Tony Ehrenreich echoed earlier calls by the women's league and NGOs such as Sonke Gender Justice for an urgent commission of inquiry into gender violence in South Africa.

"We come here today and share not only the grief of the Booysen family, the grief of the Bredasdorp community but the grief of the entire country … it's a crisis in South Africa. In the attacks against women and children we need to stand up in defence of the defenceless and also tell the abusers no longer will you act in our community" he said.

Political rally
The sombre mood of the gathering soon took a turn; in between the hymns, "Vivas", “Amandlas”, clapping, whistling and struggle songs began to punctuate the proceedings so that it began feeling more like a political rally than a memorial service.

Not one of the speakers made mention of Booysen’s personality – the achievements she gained in her short life; her aspirations. The memorial didn’t teach us anything about who she was and the life this young girl led before her rape and murder propelled her into the public eye.

The last to address the crowd, Deputy Minister of International Relations and Cooperation Marius Fransman started off by giving Olivier what seemed to be a genuinely heartfelt embrace.

After unpacking the links between the high prevalence of crime in socio-economically depressed communities with a lack of support services and government spending cuts, Fransman went on to take a swipe at the Democratic Alliance for the way they tackle crime in the Western Cape, prompting DA mayor of the Overberg District Lincoln De Bruijn to walk out.

Reflecting on the proceeding afterwards, gender analyst Nomboniso Gasa said she had hoped for less political factualism and a more co-operative, inclusive process. "I think it was sad. We need to recognise the fact that 'we' don’t have a monopoly of the microphone … what was disappointing today was that there were few community voices. Inclusivity goes beyond political parties," she said.

"There's a very hard lesson here because as long as politicians continue to speak to people and to tell people what they see to be the issues, there is always attempt at self-justification. The young [Bredasdorp based] SACP man who spoke was bitter about the fact that it has taken the death of a young girl to get them in the media. They feel as if their voices are not heard."

Fransman countered that he had to get political in order to address the root causes of violent crime. "The easy way out today would have been to speak about the sympathy but then no one deals with the real issues … That’s the hard reality," he said.

No personal reflections
While evidence-based understandings of social-ills and a display of political will are important for preventing further instances of gender violence, the proceedings lacked sensitivity towards the family.

Following the memorial, community members marched to the local police station and handed over a memorandum demanding more safety in Bredasdorp and surrounds. While there, Mariana Anderson, Booysen’s aunt told the Mail & Guardian: "Ek dink dit moes 'n roudiens gewees het vir Anene and ek voel baie upset dat daar meer politiek was … [I feel it was supposed to be a funeral for Anene but it become too much about politics … ]"

Were any family members even invited to speak on Sunday? No. Not surprisingly, Anderson said she was feeling "hartseer [heartsore]" but now "justice must begin".

Prior to the start of the memorial service, two Bredasdorp youths PJ Slingers (14) and Ben Reineke (15) showed the M&G where Booysen's mutilated body was abandoned in a lot next to newly built RDP houses. Wreaths and flowers mark the spot where she lay dying. Community members gathered round to stare through the window of the adjacent house, pointing to the bloodstain that still remains on the ground inside.

On our way back we meet Archibald, the Bredasdrorp based young SACP representative who will speak later at the memorial. He brandishes a newspaper with a front-page story of Saturday's funeral. The photo shows him as one of the pallbearers. When asked if he knew Booysen, Archibald said, "No, but I’m still angry. I’m tired of women being treated like objects. She is not the first. There have been five others before her."

Later, 16-year-old Monisha Ruiters tells the M&G that although she is relieved her friend Anene has been laid to rest and is no longer in pain, she feels scared for her safety. "Dit kan met enige een van ons nou gebeur. Dit was vir ons kinders 'n voorbeeld vir ons dat ons nie so laat loop nie. [This could happen to anyone of us. This was an example for us children that we mustn’t walk around so late at night]."

Bredasdorp is a town faced with fear, anger and above all else heartache. Perhaps William Faulkner’s novel The Sound and The Fury aptly captures the community’s sense of pathos with the line: "There was more than astonishment in it, it was horror; shock; agony eyeless, tongueless; just sound."