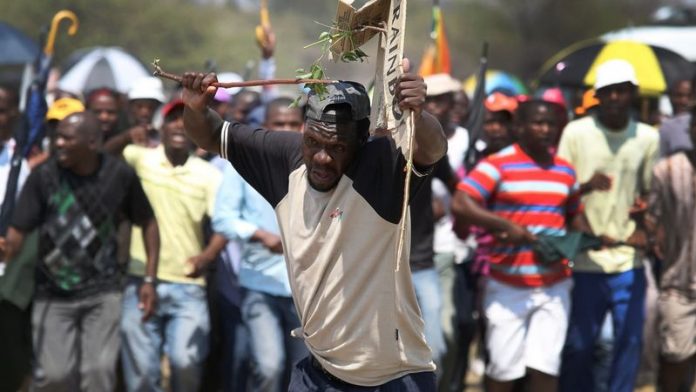 At least 13 workers were wounded on Monday by rubber bullets or machetes at Anglo American Platinum's (Amplats) Siphumelele shaft after clashes between rival unions in the first major violence this year, which follows deadly strife in the sector in 2012.

"Operations in Rustenburg and north of Pilanesberg are on a stoppage this morning in solidarity with the employees injured from yesterday's incident," spokesperson Mpumi Sithole said in a texted response to questions on Tuesday.

About 10 000 workers gathered at the Bleskop Stadium in Rustenburg on Tuesday, angry about the company's interference in union disputes, said Amplats labour leader Evans Ramokga.

"Nobody went to work today. Nobody is pleased with what happened," Ramokga said. "The workers want an explanation from management as to why they interfere with union issues. Unions should fight their own battles."

Police said the bloodshed was provoked by a dispute between the established National Union of Mineworkers and the growing Association for Mineworkers and Construction Union over access to a mine office.

Rubber bullets
Amplats security officers fired rubber bullets to disperse the crowd at the mine in the Rustenburg region, about 120km north-west of Johannesburg.

The production stoppage is likely to unnerve investors in Africa's biggest economy, home to the world's largest known reserves of platinum.

"What it tells you is the outlook for this year is not looking good. The issues of last year have not gone away," said Justin Froneman, a platinum analyst at SBG Securities.

More than 50 people were killed in labour strife last year, including 34 shot dead by police at Lonmin's Marikana mine in August – the deadliest single security incident in South Africa since apartheid ended in 1994.

Amplats, the world's biggest producer of the precious metal, this month reported its first ever annual loss, battered by six weeks of violent strikes, soaring costs and flagging platinum prices.

The unrest cost the firm 306 000 ounces of platinum, reducing full-year output by 8% to 2.2-million ounces.

While a turnaround at Amplats is critical for the fortunes of its underperforming parent, unions have promised to fight any cutbacks.

Amplats is the third worst-performing stock on Johannesburg's benchmark Top-40 blue-chip index over the last 12 months, down nearly 22%.

Unions up the ante in talks