An attempt to restore dignity after the Nazi regime 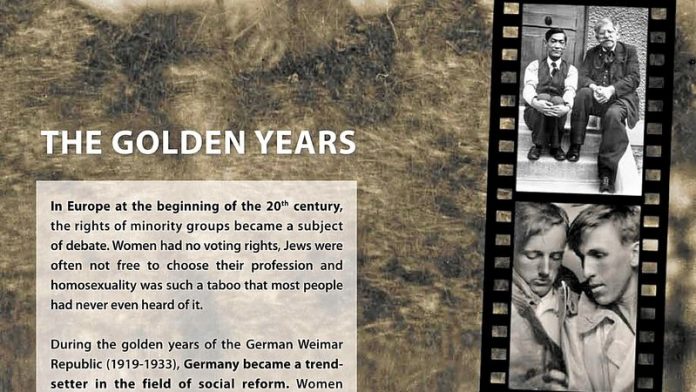 ‘The pink triangle should not be used … And why do we have pink pages? I don’t see Jews wearing the yellow star of David,” says visiting scholar and sociologist Dr Klaus Mueller of kmlink Consultancy who curated the exhibition In whom can I still trust?

How was it possible that a Nazi invention became an emblem for gay resistance? “It is a general history of minority groups to use the worst name, worst symbols given to them to turn it around,” says Mueller.

“My objection is very specific … Once you know what it meant to wear that pink triangle in the concentration camps, you just don’t want to have that on your jacket or anywhere else.”

When Mueller grew up in Germany in the late 1970s and 1980s, “the persecution of homosexuals was never talked about or even mentioned in memorials to the Holocaust”.

Later, as gay activism developed, Mueller recalls homosexuals being pulled out of the Remembrance Day parades by the police. He would also find himself in gay pride marches in Germany where people screamed, “Hitler forgot to gas you”.

“We had no names, no faces, just these ‘men with a pink triangle’. They deserve the dignity not to disappear in the victimhood of the collective … Not a single individual survivor that we knew of, not a single documented individual in the camps, because the expert institutions, museums, universities did not go into this field.”

How iniquitous that silence can be is revealed by the post-war treatment of survivors. We now know that between 10 000 and 15 000 men charged with homosexuality were sent to concentration camps, a ­number comparable to political prisoners and Jehovah’s Witnesses.

Specific victimisation
Homosexuals were not marked for genocide in extermination camps, but the death rate was extremely high as they were unable to form networks, which were vital in order to stay alive in the camps. They were also subjected to specific victimisation. Something, it should be pointed out, that is still the case in today’s prisons.

After liberation, the survivors were initially recognised as victims of the Nazi regime. However, Paragraph 175 that criminalised homosexuality was one of the few Nazi laws the Allies left on the books. Homosexual victims were consequently treated as criminals after the war. What Mueller describes as “a threatening cloud” hung over the survivor’s lives and those of other homosexuals.

One survivor, Karl Gorath, arrested in November 1939, deported to camp Neuengamme without trial, forced into slave labour, later sent to ­Auschwitz I, then to Mauthausen, was convicted two years after ­liberation again for the same reason based on the same law and by the same judge.

Homosexuals were denounced in the terms the Nazis had used “as deviant, worthless, not part of society”, notes Mueller.

Survivors fell silent, isolated from society, struggling to pick up their lives; their families ashamed of them. Many were subjected to forced castration. They would simply say “they were in the war”.

Unable to speak and without ­support to try to come to terms with the horror they had undergone, they waited 40 to 50 years before they spoke. “The memorial culture that developed was not done in ­conversation with the gay survivors,” says Mueller. “[Which] is extra­ordinary in a Holocaust remembrance culture that is attuned to the individual story.”

No historical solidarity
This impressively curated exhibition focuses on the deeply moving narratives of individuals and goes some way towards restoring their memory and dignity.

“Gay survivors were never asked by the gay movement. The pink triangle became a symbol of recognition, a secret code, but also a general gesture [of] never again, and that’s it, but there was no historical solidarity.”

That lack of solidarity has echoes in South Africa today. Those empowered enjoy their constitutional rights, but show little solidarity with the anywhere between one and two million homosexual South Africans who still live in fear and silence.

People prosecuted for their homosexuality under the apartheid regime, or subjected to medical procedures in the old South African Defence Force, have similarly been forgotten in this country.

Persecution, says Mueller, is work. “A large portion of the population participated. It was not just done by the police and Gestapo. In ­Berlin, 62% of all investigations started because of private denunciations from family, friends, neighbours and work colleagues. People volunteered information; they were not ­pressured in a normal police ­investigation.”

What happened was “state-sponsored homophobia … calling upon you as part of society to evict homosexuals. Hotel owners called the police; people on the street tried to make arrests.”

The same patterns can be seen emerging across Africa today.

Cambridge human geographer Dr Andrew Tucker, who has been working in the field in Uganda, suggests that the recent homophobic moral panic is rooted in political mud­slinging. Politicians vie with each other to prove who is more “anti-gay”. All kinds of political parties participate; in 2011 an opposition politician in Zimbabwe was thrown into jail for saying President Robert Mugabe had homosexual sex.

“Politically, if you denounced someone as homosexual,” says Mueller, “there was no way to recover; you didn’t need to prove anything, it just worked; a ‘moral’ silent majority supported and went along with the accuser in that expression of hate.”

Branded as deviants by the Nazis, the communists and social democrats returned the favour. “We are the true Germans; the Nazis are the perverts. Political opposition [groups] used sexual denunciation to make themselves respectable.”

Accused of burning down the Reichstag, the communists fabricated the story that it was done by a homosexual hustler, claiming he was a lover of Nazi leader Ernst Röhm, a known homosexual.

When Röhm, a powerful military commander and potential threat, had served his purpose, Hitler had him assassinated. Homosexuality was the public justification. There­after, any Nazi party member accused of homosexuality, no matter where they were arrested, was sent to Berlin for prosecution.

The allegations the communists published in the Brown Book, although an important document of Nazi terror, were as damaging to homosexuals as the Protocols of the Elders of Zion were to Jews.

The stereotype has continued in film and literature. “The SS and Nazis are not portrayed as ordinary German men and women, which they were, but portrayed as some strange alien; sadists, masochists … homosexuality as a transgression into evil,” says Mueller.

“And that is still with us, which is amazing! Not only did nobody care about the actual people that were incarcerated, but afterwards they are turned into the perpetrators.”

The little-known story of Nazi persecution of homosexuals is fraught with deadly irony and calamitous miscarriages of justice. It has much to teach us, not only about homophobia and othering, but also about how we care for, remember, treat one another in our society.

Richard Freedman, director of the Cape Town Holocaust Centre, which is hosting this eye-opening exhibition, says the “centre already acknowledges other victims … [But] we want to deepen that knowledge. Museums need to have a social ­conscience, not only tell a historical story.”

On at the Cape Town Holocaust Centre until March 22