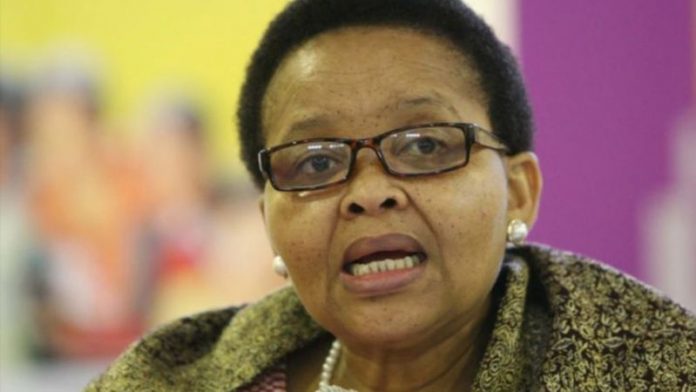 "It has become clear to me that my comments may have offended some members of our community. I would, accordingly, like to retract these remarks and apologise unconditionally to them," she said.

Xingwana told the Australian Broadcasting Corporation that young Afrikaner men were raised to believe they owned women and children.

"Young Afrikaner men are brought up in the Calvinist religion believing that they own a woman, they own a child, they own everything and therefore they can take that life because they own it," she said during the interview aired on Monday.

"We also have cultural differences as well in our own communities, where we have women who are forced into marriage and we are dealing with all those issues."

Xingwana was being interviewed on the arrest and murder charge against Olympian and Paralympian Oscar Pistorius following the February 14 fatal shooting of his girlfriend Reeva Steenkamp.

"Through my comments, I sought to convey the message that, as a country we have emerged from a very violent past and that some tend to use cultural and religious beliefs to justify gender inequality and abuse," she said.

Angry reactions
Earlier, the Afrikanerbond said Xingwana had proven beyond doubt she was not fit to hold office in a constitutional democracy.

The Christian Democratic Party (CDP) called for President Jacob Zuma to fire her.

"Many non-Afrikaners, black and white, are members of Calvinist churches and her latest statement could be considered as religious intolerance," party spokesperson Reverend Theunis Botha said.

The CDP further said that: "This is also not the first time Xingwana stereotyped a community based on untruths.

"In her infamous Church Square speech, she accused farmers across the board of atrocities against farmworkers, based on a single Western Cape incident – by then already proven to be false by the police and reported as such to government months earlier … The country does not need demolishers in Cabinet or any other place in government, but bridge-builders."

The Afrikanerbond said Xingwana had "abused her office" and did not reflect honour or dignity in her position.

"This minister has proven beyond any doubt that she is not fit to hold office in a constitutional democracy," Afrikanerbond secretary Jan Bosman said in a statement.

Gun violence
In the ABC report, which aired on Monday, the focus was on how the Pistorius case highlighted gun violence in South Africa.

"I would ask him to get rid of all his guns. Because I believe if he did not have guns in his home, Reeva Steenkamp would be alive today."

Read: Xingwana shows a glimmer of a clue on Pistorius, Steenkamp, and guns

Bosman said Xingwana's statements were an "extreme verbal attack on the integrity of Afrikaners".

"It is unwarranted, uncalled for and without any substance. At the very least the minister owes Afrikaners, men, women and children, an apology without any reservations," Bosman said.

"We can only deduce that she chose to attack Afrikaners to create a smokescreen for her total lack of any programme of action whilst [minister], and to deflect from the serious allegations of corruption and mismanagement in her department and her failure to provide a report with details about these allegations to Parliament."

Meanwhile, Afrikaner lobby group AfriForum said on Wednesday it was considering bringing a complaint before the Equality Court against Xingwana.

"Xingwana's remarks boil down to a blatant contravention of various sections of the Promotion of Equality and the Prevention of Unfair Discrimination Act," spokesperson Ernst Roets said in a statement.

"She has discriminated on the basis of race, faith and gender. On top of that, she clearly lacks the necessary expertise to talk knowledgeably on the topic."

Roets said AfriForum had submitted the matter to its legal team. – Sapa

Zuma on child rape: ‘Something is seriously wrong’