Why Zwelinzima Vavi is under attack 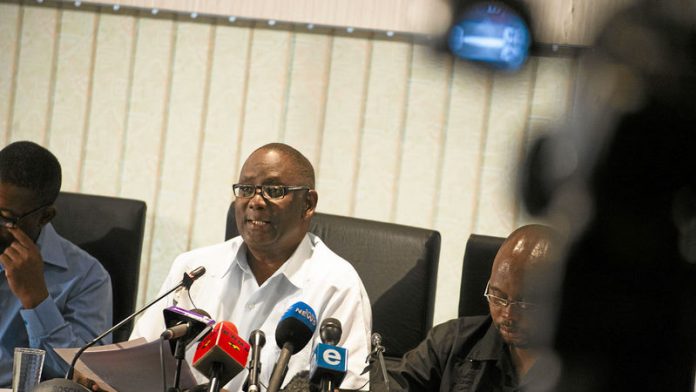 The Mail & Guardian has learned that a powerful faction is planning to show Vavi the door at Cosatu's next central executive committee in May.

Vavi – serving his fourth term as Cosatu general secretary – this week came under attack from his comrades, who accused him of, among other things, collaborating with opposition parties and rival unions to destabilise the ANC and the government.

Cosatu leaders also lambasted Vavi for publicly calling for an investigation into the multimillion-rand upgrade of President Jacob Zuma's rural home in Nkandla, without the federation's authority.

In what appears to be a move to get rid of Vavi, Cosatu leaders this week resolved to establish a committee, comprising presidents and general secretaries of all affiliates, to appoint an independent inquiry to look into a number of allegations against Vavi, including claims that he sold Cosatu's old building for R10-million less than its actual value.

In a statement issued on Thursday, Cosatu's top six officials, including Vavi and Cosatu president S'dumo Dlamini, vehemently denied that Vavi was under investigation or that there was a plan to investigate him.

"The central executive committee had a frank and robust debate based on the report [by a Cosatu congress] that was tabled in the meeting of Cosatu affiliated unions, presidents and general secretaries," the statement said.

"The committee mandated this body to continue the discussions and to bring in independent people to facilitate further discussions that are necessary to address all issues raised in the meeting. There is no truth to the suggestions that the Cosatu general secretary is under investigation for financial impropriety or any other reason. The central executive committee strongly condemned the factional leaking of internal debates, which get twisted in the media."

Asked for more clarity on the statement, Dlamini said Cosatu was unable to comment on issues that would be looked at by the independent body. "This will be an internal discussion. There will be no discussion in public. We will not divulge to you [the media] what discussions will be there. Allow us space to embark on this. When the process is complete, we will inform you," said Dlamini.

Leaking information
In his response, a visibly irritated Vavi did not deny that there were allegations raised against him by the central executive committee. He accused some Cosatu leaders of leaking the information to the media in order to tarnish his name.

"The sources are not official. They will not want their names to be known. They take a discussion that happened in the meeting and twist it to make it a big scandal. Every organisation demands space to discuss issues," said Vavi, adding that if Cosatu responded to questions, it would be feeding into the frenzy.

"I will step down if it is found that I misled the central executive committee and that I used the service provider that is close to my family. I will leave. You can go look at Cosatu's financial statements. Allow us a space to enter into a discussion. We don't know yet," said Vavi.

Three senior Cosatu leaders, who attended the meeting told the M&G that the Dlamini lobby continued to push hard for a formal investigation, which they insist must and will ultimately take place, similar to the one that investigated former Cosatu president Willie Madisha.

"The Vavi group wanted this to be sorted without any investigation. We [the Dlamini group] said no, this is not the first time we've established an investigation like that. It was done against Madisha.

Counter-revolutionary
The faction, which supports President Jacob Zuma and Dlamini, is pinning its hopes on the outcome of the inquiry. It hopes to be rid of Vavi, who has become a thorn on the side of those who support a Zuma ANC.

Vavi is seen as a "counter-revolutionary" by Zuma's supporters because of his scathing criticism of the ANC president and his administration.

This week Vavi's rivals in Cosatu demanded that he should be put on special leave for, among other things, the sale of the building for half of what it was worth.

According to Companies and Intellectual Property Registration Office (Cipro) records, the old Cosatu building was bought by a company called Street Talk Trading 175 for R10-million in August 2011. Cosatu leaders claim the building is valued at about R20-million. They claim that Vavi rejected a R15-million offer to buy the building by Cosatu's police union Popcru, in the process deliberately undervaluing the building.

Vavi is also accused of misleading Cosatu leaders regarding the purchase of the new building. Cosatu leaders claim that the federation was paying rent on the building despite the fact that Vavi told them that Cosatu had bought it for R50-million. Cipro records shows that the new building was bought by KKM Property Developments – a subsidiary of Cosatu's investment arm – Kopano Ke Maatla, for R50-million. Cosatu's deputy general secretary, Bheki Ntshalintshali, confirmed that Cosatu was paying rent and that Kopano Ke Maatla was independent from Cosatu. Said one Cosatu leader who preferred to remain anonymous: "We were told that the building belonged to Cosatu. There was no reason to sell the old building if we are now forced to pay rent."

Another allegation against Vavi is that he collaborates with opposition parties – including the new Agang, headed by activist and academic Mamphela Ramphele – as well as Cosatu's rival unions, to destabilise the government and the ANC. Cosatu leaders also accused Vavi of authorising a shop steward survey by think-tank Forum for Public Dialogue, owned by former Cosatu employee Moeletsi Mbeki.

"The people who made the survey were the people who are now associated with Agang like Mbeki and [political analyst] Prince Mashele. They were quick to make the survey public. Why did he [Vavi] go out of his way to bring in people who hold a different ideological position to Cosatu?" said the Cosatu leader.

"During the Cosatu conference last year, he invited people who are known to be against Cosatu, such as Professor Somadoda Fikeni. Ramphele said she will work with non-governmental organisations and Vavi is part of Corruption Watch. We believe Corruption Watch is there to discredit the ANC and other alliance formations. They intend to cause malicious damage to the ANC and the unions."

Cosatu spokesperson Patrick Craven said yesterday that he was not able to respond to specific questions that the M&G sent him relating to allegations.