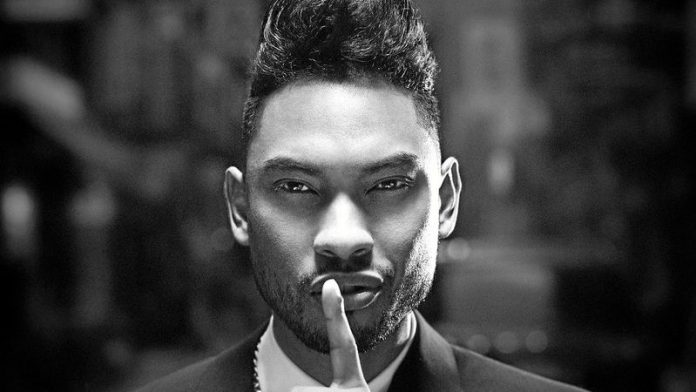 First-time Grammy winner Miguel Jonetel Pimentel (27), or, in these informal days, Miguel to you, me and everyone, drinks his water straight from the bottle. He must be thirsty because he’s had to do a lot of interviews on Friday morning with what could collectively be called a freebie of South African entertainment journalists at the Melrose Arch Hotel.

Whether you’re a straight or gay male, you cannot deny that he is a very striking, very handsome man with his mixed genes from a Mexican dad and African-American mom. I obviously can’t speak for women, except to say that my female colleagues had various unprintable messages I had to relay to him on my way out to my interview. Okay, I can risk one: “Please bring him back with you so that we can play with him!” I won’t try and describe her body language because children also read this website.

Miguel performed on Friday night in Johannesburg and will perform on Sunday in Cape Town. He won the award for best R&B song for Adorn from his brilliant second album Kaleidoscope Dream at the Grammys last month.

I know that indie-R&B musician Frank Ocean caused quite a stir last year with his debut album, Channel Orange, making even R&B-hating hipsters salivate. But for me, Kaleidoscope Dream was even better, more varied, more creative and much more willing to take chances, like Prince before he started caring more about his name than his music. While I don’t care much for Grammys, I agree that Adorn is something special. It is, as The Fader very appropriately wrote, “a top contender for our generation’s Sexual Healing".

So, like every other journalist, I had only 10 minutes with Miguel. Literally. Fortunately, he was excellent value for my money and impressed me as a highly intelligent and genuinely down-to-earth person. I’m not even mentioning his incredible talent as a musician, but you don’t need to take my word for it. Just listen to Kaleidoscope Dream and your ears will confirm that.

Is it fair to compare you to Prince and Marvin Gaye?
No. It is not fair to them because we are talking about Prince and Marvin. These are two timeless artists whose contribution to music and culture are unparalleled. When you think of the new wave punk soul thing that Prince brought and everything that he embodied and what he did in being such an artist and musician.

And if you take all the evolution of Marvin Gaye, going from a very traditional doo-wop to soul to a more conscious place. I don’t know, man – these are people who’ve made major impacts and whose music has become part of history, celebrated history. To compare is almost … I don’t think I’ll do them justice. I think it is a huge compliment to say maybe I remind them of a small portion of these artists. I hope I do, because they influence me, they are musical mentors … but I don’t feel worthy.

I take it as a huge compliment personally … but the fan in me goes, hey that’s Prince and Marvin baby, leave them alone.

When you create music, do you listen to music or don’t you?
Absolutely not! Of course you have to be inspired first. I am a fan of music. I’m absorbing it in any way you can. I’m really submerging myself in the music in every way I can, trying to figure out the nuances and where it came from or what it reminds me of or why I relate to it so much.

I have to not do that, because even subconsciously there could be some influences that I have to avoid. I don’t want to dilute my creativity – I want it to be as pure a representation of my sensibility and my perspective as possible.

Did you have a lot more freedom on this album than on the first one? Were you forced to sound like someone else, like say Usher, who you worked with?
Mark Pitts, who signed me, always gave me creative freedom … he’s always trusted me. So I suppose the freedom that you’re hearing on this album is more begins with me trusting myself to do what I’m hearing. If they don’t get it, fuck ‘em. Make the music that you want to hear. That’s all we can do. We can only do what inspires us and I only wanted to get it out finally. I was kind of nervous with the final product, you’re sitting there with the album on your desk, and you put it in and you say ‘I really dig this’, but I don’t know if anyone else is really going to understand or dig it. They are going to pick it apart or whatever. So we’re really fortunate to kinda connect – for people to pay attention, to draw parallels to see where the influences come from.

Musicians are products – did you as a “product” have to make compromises, personally, politically, creatively?
The only compromise I had to make with this album was one song I had to put on the album – one compromise! It was a logical compromise, because at the end of the day we are, as you say, products. Reputation is everything, product or not, you know human reputation – it is hard to build, it is hard to change. So as an artist, as a product, I have to be honest with the reputation I have already built. Luckily for me that first album didn’t really have much of an impact, and if anything, it allowed me the creative freedom that I’ve got now. It set me apart – more so my style did that – it set me apart, what ever. Still, the majority of people who latched onto that album were a more traditional R&B consumer. The song I compromised with – How many drinks – was a much more superficial, it’s definitely, uh, this is a more R&B song.

I only allowed it because it context of the album, it is a part of me, it is part of my perspective. I wrote the song, it came from a real place, it is something I would say. But the sound of it, and the delivery of it, sound very typical, but with context it makes sense and for people who discovered me on the first album, it was a hint, it was a wink – okay I see you, follow me, c’mon let’s go.

As a businessman, as a product, I had to make that my compromise. Otherwise I was so involved with this album, it paled in comparison – as in down to overseeing the artwork and the art direction and the treatment and so on and so forth, producing the music, playing on the album, there’s a lot I did.

The track Candle in the Sun is overtly political – I watched the video last night and I am thrilled when a musician isn’t scared of politics. Is politics important to you?
I have learned over the last few years everything is political. I wanted to ignore it for so long – it is quite idealistic to think otherwise. At some point as a human being you have to come to terms with realities. Politics is a reality in everyday human life and obviously in economics and in government. So I have to pay attention to what I see and for this album it is important to somehow take a snapshot of my lifestyle and the things I think about and give people a more rounded perspective of who I am. I turn on the radio, or CNN is there on my side of the world, just as it is on your side of the world – as much as we’re distracted, we still see these things. I had to come to terms with it. It is something that weighs on me, things that I worry about or question. If nothing else it was: "Can we have this conversation, let’s talk about it." Because global warming is happening now – we can keep avoiding it, or there’s genocide happening or children are starving here, or there are a group of students rioting, or there’s an economy that’s failing or there’s a government official who’s too greedy and is corrupt … these things are happening and we have to address them.

Miguel performed in Johannesburg on Friday and will perform in Cape Town on Sunday. Tickets are available at Computicket.

'I remember that I was supposed to perform about two or three songs. But the DJ ended up adding another song because everybody was just having fun'
Read more
National

Slice of Life: Learning from a place of failure

​What does foreign validation of SA music really count for?

The need for cosigns from non-Africans is a long-standing feature of the South African music industry that undermines our artists’ capabilities.
Read more
Friday

​’Examples’ shows us the musical law of Eric Lau

With talented friends around him, the electronic music producer is recrafting instrumental rap with his latest album.
Read more
Friday

She has no concerns but – as the new ‘Mercedes’ single suggests – the celebrity trap awaits her.
Read more
Advertising
Continue to the category
Politics