SADC alarmed by reports of political violence ahead of Zim polls 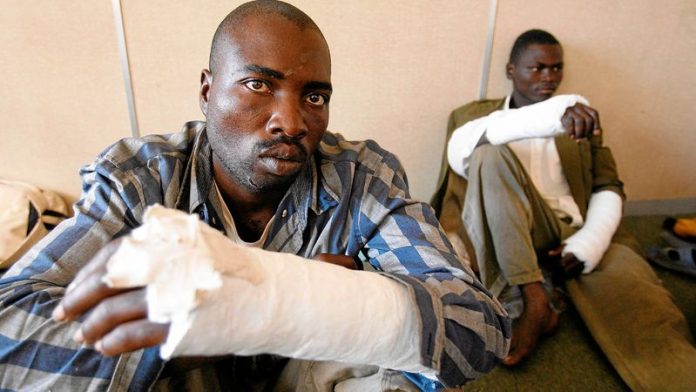 Four African Union-accredited diplomats from SADC countries  said this week that the Southern African bloc  – the guarantor of the global political agreement between Zanu-PF and the Movement for Democratic Change (MDC) – was concerned by the reports of violence and the escalation of the harassment of civil society organisations ahead of the March 16 referendum and the elections, which are expected to take place later this year.

The diplomats said President Jacob Zuma, the SADC mediator in the Zimbabwe crisis, was under pressure to convene a special summit ahead of the polls in the wake of reports of political violence, but wanted concrete evidence first.

Zuma’s facilitation spokesperson Lindiwe Zulu said her team was waiting for a formal report from the Joint Monitoring and Implementation Committee on reports concerning the violence. “We are waiting to hear from [the committee] and then we will take it from there. It has to ­formally give us a report on the said violence,” said Zulu.

Dossier
​Last week the MDC-T sent a dossier to the SADC facilitation team describing 120 incidents of politically motivated violence against its supporters, including the killing of 12-year-old Christpowers Maisiri.

“The problem with the MDC-T is that their reports are not detailed,” said a member of Zuma’s facilitation team, who asked not to be named.

He said the reports in the MDC-T’s dossier have “loopholes, which makes it difficult for the facilitation team to pin Zanu-PF as the perpetrators of violence”.

“In the latest case of Christpowers, they need to prove without doubt that he was killed as a result of arson by Zanu-PF people.”

Meanwhile, the European Union said it was ready to provide financial support to help the country to hold credible polls, despite Zanu-PF’s insistence that Western observers would not be allowed into the country to monitor the elections.

EU ambassador to Zimbabwe Aldo Dell’Ariccia told the Mail & Guardian that the 27-member bloc was willing to help the country as the EU has already been “contributing to enable a positive environment for the holding of elections”.

“We are ready to consider further support to the conduct of credible elections,” he said.

Support programme
The country, which is reeling from a severe financial squeeze caused by poor cash flows attributed to low revenue streams, wrote to the United Nations early last month to ask for for help in bankrolling the referendum and the general elections.

But the UN said that funds could not be released immediately as it first had to carry out a “needs assessment”. It did not say how long this would take. Zimbabwe is scheduled to hold the referendum on its Constitution on March 16. The government has also been reported in local media to be pressing local firms to fund the referendum, which has been estimated to cost $100-million.

Zanu-PF has in the past said the country would not allow foreign countries that imposed targeted sanctions to observe the elections. The EU imposed sanctions on President Robert Mugabe and his inner circle in 2001, citing electoral fraud and human rights abuses.

Dell’Ariccia could not say whether the EU’s assistance would come with conditions attached, but indicated that transparency of the electoral process was key to any EU funding.

“At this stage, the UN has been invited and is developing a support programme,” he said. “Based on this programme on the general conditions for a credible process, the EU and other partners will consider their contribution.”

recognition of agreements reached between the parties on a draft Constitution and the announcement of a date for the referendum.

“It also confirms that a peaceful and credible constitutional referendum would justify the immediate suspension of the majority of remaining EU measures. The EU council has reiterated its commitment to continue engaging with the government of Zimbabwe, and to work with any government formed as the result of a peaceful, transparent and credible electoral process.”

The wicked challenge of rethinking internationalisation in Southern Africa

The ability to innovate, and adaptability and flexibility will determine whether universities can advance internationalisation in the post-Covid-19 world
Read more
Advertising