Nathi Mthethwa gets off lightly 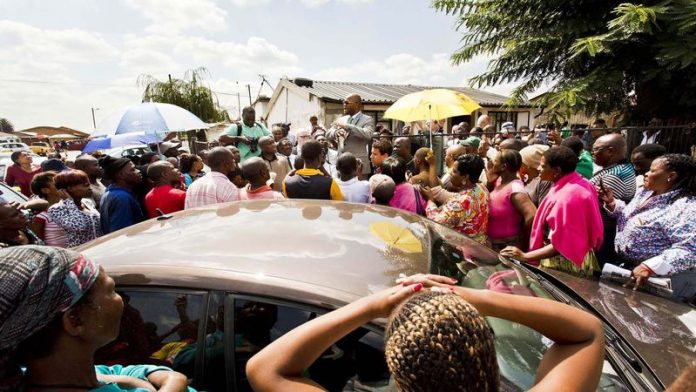 Despite being warned against meeting people who sue the police for wrongful death, Police Minister Nathi Mthethwa spent about 30 minutes with Emidio Macia's family representatives on Thursday. They – and the broader community of the East Rand township of Daveyton – ­welcomed the police minister with good grace, if not in numbers.

About a dozen people were waiting for Mthethwa when he arrived for a community meeting near where Macia died two weeks ago, and the number never rose above 50.

People who did not take the opportunity to give the government a piece of their minds said they were showing contempt for a police force they no longer respected, or that they ­simply did not see any use in attending a talk shop.

"What are they going to say that they haven't said to us?" asked a woman, who described herself as "very, very angry" about the Mozambican taxi driver's brutal death at the hands of the police.

And, indeed, Mthethwa had nothing new to share, nor did Gauteng community safety MEC Faith Mazibuko or provincial police commander Mzwandile Petros.

"What happened here was a tragedy which should not happen ­anywhere," Mthethwa told the small crowd, even as national police ­commissioner Riah Phiyega expressed the same sentiments hundreds of kilometres away in Rustenburg at the Marikana inquiry.

Mthethwa and his officials were given a remarkably easy time of it by those members of the community who were in attendance, with accusations of police taking bribes or not doing their jobs adequately, but very few mentions of police brutality or the targeting of foreigners.

Importance of training the police
Mthethwa has been criticised for being absent during the outrage that followed the publication of video footage showing Macia being assaulted and dragged behind a police vehicle. On Thursday, though, he took the opportunity to appear before the cameras that formed a picket between him and the people of Daveyton, and spout predictable sound bites.

"I want to emphasise from the side of the police that we will never condone police being brutal against people, against unarmed civilians," Mthethwa said.

Police have a responsibility to earn the respect of the communities they police, he said, and they must arrest illegal immigrants but not target foreigners who are in the country legally. He also reiterated the importance of training the police, noted that about 900 police officers had been arrested over the past two years and expressed confidence in the judicial process.

Petros promised follow-up visits to the area, and Mazibuko promised a crime summit for the community before the end of April, after ­urging the local taxi association not to employ "cheap" foreign drivers ­without the right documentation.

The 22 people who addressed the officials before they spoke focused largely on the role of community policing forums, with the occasional complaint about a lack of security at the local clinic, the poor state of policing around the local taxi rank, and a lack of money to implement various projects.

But even those objections were largely silenced after Mthethwa said he had been humbled by the response of the community, and praised Daveyton in particular for working with the police.

"I will tell you without hesitation that no police official would claim to succeed in the fight against crime without the involvement of the ­members of the public," he said.