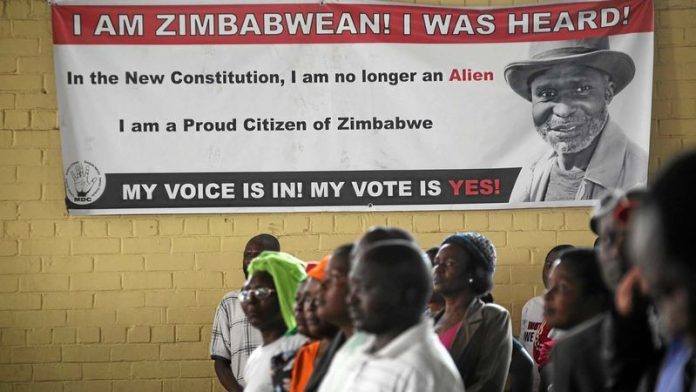 Tallies from regional counting centres published by state-controlled daily the Herald found 3.1-million voters of a total of nearly 3.4-million people who cast their ballots approved the supreme law.

The paper said 200 000 people rejected the proposed constitution in Saturday's vote. An estimated six-million citizens were eligible as voters.

The electoral commission was due to release the final official results at 12.30am. Mugabe and his long-time rival Prime Minister Morgan Tsvangirai had lent their backing to the draft constitution.

A preliminary count on Monday of around half a million votes showed more than 90% of the population endorsed the draft constitution in Saturday's referendum, according to Prime Minister Morgan Tsvangirai's party, the Movement for Democratic Change (MDC).

On Sunday police arrested four of Tsvangirai's senior aides, including advisor Thabani Mpofu, which Tsvangirai said was intimidation by his political rivals in the run-up to the general elections.

The referendum held on Saturday was hailed by the United States and regional observers as peaceful and credible.

Its approval will also clear the way for elections later this year. The new vote will end the tense power-sharing arrangement set up by Mugabe and Tsvangirai after chaotic 2008 elections. – AFP