Is South Africa the odd Bric out? 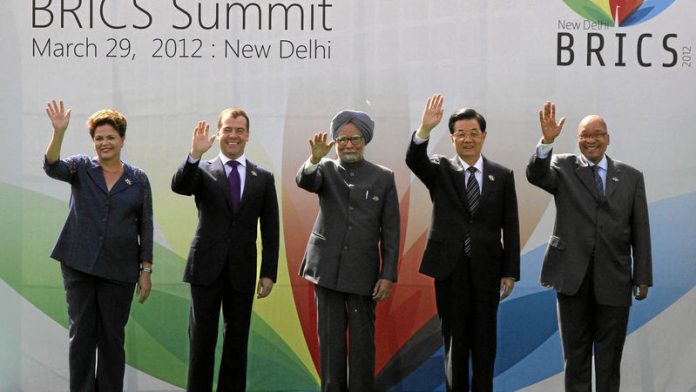 On March 26-27 South Africa will – for the first time since joining the Brazil, Russia, India and China grouping in 2011 – host the annual Brics summit.

President Jacob Zuma will lead discussions on the establishment of a Brics development bank and a range of other issues.

But some question whether Zuma should even be at the table, never mind sitting at its head.

South Africa has the continent's largest economy, but is struggling amid crippling joblessness and growth that lags well behind its African and emerging market peers.

It is the world's 29th largest economy, according to the IMF. That's smaller than the economies of Austria, Iran or Argentina – not exactly behemoths of global commerce.

By contrast, China is the world's second largest economy, Brazil the seventh, Russia the ninth and India the tenth.

Yet South Africa is not a B-list celebrity gate crashing an A-list party, according to Catherine Grant of the South African Institute of International Affairs.

Grant, a former diplomat for New Zealand, points out the focus of the Bric grouping is much transformed since a Goldman Sachs economist coined the term in 2001.

"The Brics is not an economic grouping. Size of economy was a factor when it was an investment construct by Jim O'Neill, but it is now a political grouping," said Grant.

"To have credibility and representation of the global south the Brics needed an African member and South Africa makes a lot of sense."

"They are a significant middle power in their own right and they have the capacity, the demonstrated ability to play a role in global issues."

In South Africa, the Bric nations get a democratic African voice that echoes their discontent with existing western-dominance of global institutions like the UN, World Bank and IMF.

And although South Africa's status as the gateway to the rest of the continent is often overstated, it remains a regional powerhouse.

South Africa accounts for just 2.5% of Brics GDP, but it is responsible for 11% of Bric-Africa trade according to Standard Bank research.

It is home to Africa's largest stock exchange by far and South African banks bestride the continent.

South Africa is keen to use its Brics membership to cement that hub position.

It hopes to tap joint Brics spending on infrastructure projects to bind its region to South Africa.

There are signs South Africa may need to leverage Brics membership if it wants to be competitive.

China and India in particular have often bypassed the country in favour of faster growing economies in west and north Africa.

Standard Bank economists believe Bric-Africa trade will top $500-billion by 2015, with China-Africa trade making up roughly 60% of that total.

"China and India have entered Africa without the gateway, the only ones who would rely on South Africa are Russia and Brazil," said Neren Rau, CEO of the South African Chamber of Commerce and Industry.

"Brics is extremely important for South Africa in many respects, although we need to make sure to position ourselves well," said Rau.

The trajectory of the summit and the Brics bank may make it clearer if South Africa is also important for it's fellow Brics. – Sapa-AFP