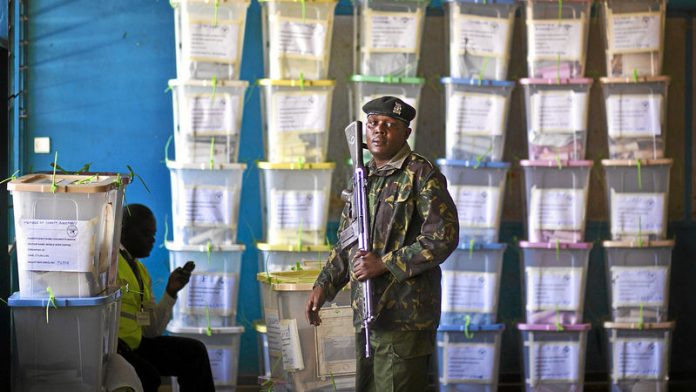 It has been a week of soul searching for the media in Kenya. The Supreme Court has just one more week to deliberate on claims by Raila Odinga that it was a "flawed electoral process" that delivered Uhuru Kenyatta the presidency in a first-round win. It is a decision which not only suspends the swearing in of Kenya's president-elect, but has left anxiety lingering in the air like a dust cloud.

It is only now that Kenyan journalists are emerging from behind a curtain of silence and asking the "awkward questions" that Linus Kaikai, managing editor of Nation TV, admits "we should have been asking before". For example, were earlier warnings that the electronic voting system could fail simply ignored?

Kenya has long prided itself on energetic and free media, but when the country went to the polls a little more than a fortnight ago, newspaper reporters and broadcasters went into a sort of self-imposed purdah. Live feeds of press conferences from competing candidates were "discouraged" and when the Independent Electoral and Boundaries Commission held its news briefings and invited questions from the press, many Kenyans were astonished when none came.

The reason, according to one newspaper columnist, was a culture of "peace evangelism", or, put simply, peace by omission in a country still scarred by its recent past.

Unprecedented violence following disputed polls five years ago left more than a thousand people dead and a quarter of a million homeless. This time around the election was, with a few exceptions, a peaceful affair. This was thanks in large part to the faith placed in a new Constitution and restraint by Kenya's leaders. A culture of "hate speech" was partly blamed for the violence in 2007. One journalist, Joshua Sang, is due to appear at the International Criminal Court in The Hague in the coming months, accused of inciting ethnic hatred through his radio broadcasts. This time around, it seems editors were taking no chances.

Instead of playing a watchdog role the media were used as "a guard dog protecting the interests of the status quo, in the name of peace", commented one Kenyan journalist during a heated online discussion.

Potential trigger
"Everything was seen as a potential trigger," admits Linus Kaikai, who spent eight years at the SABC before returning to his native Kenya to head one of the leading television stations. "We exercised a lot of care before putting material on air."

The dilemma becomes clear after a quick glance at social media. Ethnic rivalries continue to be played out online in venal anonymous fashion. New laws on hate speech aim to clamp down on any whiff of ethnic political rhetoric. Yet some believe it is a convenient excuse for editors to bury their heads in the sand and disregard painful issues of elitism and corruption, which many say need to be confronted for Kenya to move on.

The foreign media were branded "alarmist" by some government officials. In a country that has traditionally welcomed the media from abroad, the response to them was decidedly hostile. Deportation was threatened and Bitange Ndemo, the permanent secretary in the information ministry, went a step further and insisted that foreign journalists be "vetted". Many of my Kenyan colleagues blushed at this political bluster, yet, in the past few days there have been signs of capitulation.

Joseph Owiti a senior ministry colleague assured the Mail & Guardian that "there would be no vetting of [foreign] journalists"; just checks to ensure they "have the proper paperwork".

Self-censorship
The power behind the press has also been blamed for self-censorship. Kenya has witnessed a massive expansion of the media. Many newspapers and TV and radio stations are owned by politicians. The two main presidential contenders both have links to high profile media brands and that has inevitably influenced coverage, argues Shitami Khamadi of Internews Kenya – a nongovern­mental organisation that monitors the media.

Kenya's Constitution entrenches media freedom, but journalists worry about their jobs and at times have been seen as collaborators with politicians in an industry which has not been immune to corruption.

Now is the time for the media to redeem itself, argues Gado – the pen name of one of Kenya's most respected cartoonists – who has endured running battles with editors these past few weeks.

There has been "no good forensic analysis of what happened during the election", he sighs. "We were hoodwinked" by the peace message and, as Kenyans, "we should know better than that".