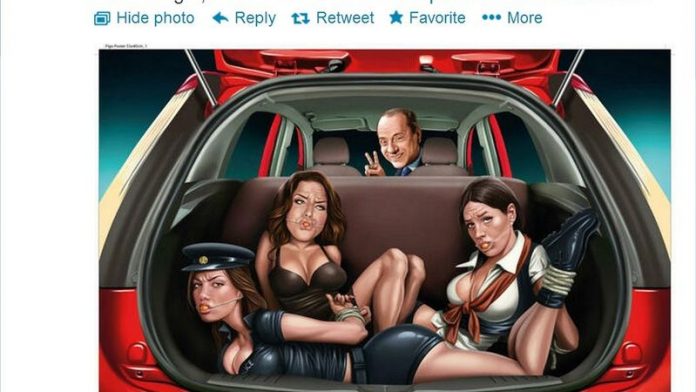 The ads, created for the Indian market by Ford Motor Company and ad agency WPP, were leaked onto Ads of the World. One in particular shows three scantily-clad, bound, gagged and crying women in the Figo’s boot. The driver of the car bears a resemblance to Italy’s former prime minister Silvio Berlusconi, who is mired in controversy for allegedly paying for sex with underage girls and holding wild sex romps he referred to as “bunga bunga” parties. The ad caption reads: "Leave all your worries behind."

The second of the three leaked mock-ups features the famous Kardashian sisters bound similarly in the back, with Paris Hilton as the driver, while a third (and notably less sexually explicit ad) shows Michael Schumacher driving with Sebastian Vettel, Fernando Alonso and Lewis Hamilton.

WPP sent a statement to the Huffington Post, apologising for the creation of the ads: "We deeply regret the publishing of posters that were distasteful and contrary to the standards of professionalism and decency within WPP Group," the e-mailed statement said. "These were never intended for paid publication and should never have been created, let alone uploaded to the internet. This was the result of individuals acting without proper oversight and appropriate actions have been taken within the agency where they work to deal with the situation."

Ford issued another statement to the Wall Street Journal, echoing WPP's statement. “We deeply regret this incident and agree with our agency partners that it should have never happened … The posters are contrary to the standards of professionalism and decency within Ford and our agency partners.”

The ads are all the more controversial considering India’s problem with rape and violence against women, in particular the gang rape and subsequent death of a New Delhi student on a bus and the recent gang rape of a Swiss cyclist by five men.

The ads have been criticised for promoting rape culture. Popular feminist website Jezebel asked satirically: “Nothing sells a mediocre car like intimating that you'll be able to fit three crying, bound, gagged women in the back, right?”