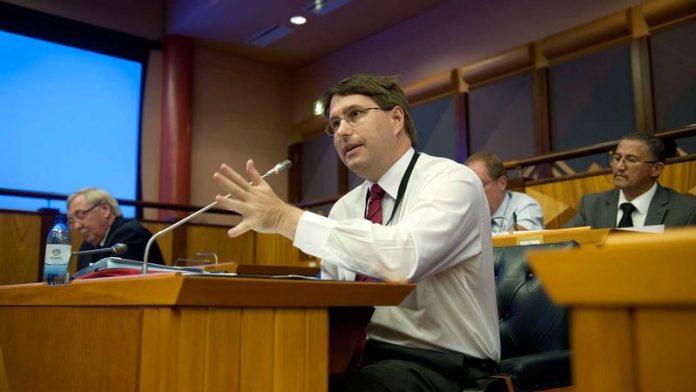 A row broke out at an extraordinary meeting of the joint standing committee of defence in Parliament on Thursday when the clearly outraged ANC chairperson of the the committee, Jerome Maake, said Maynier must "not be mischievous" and make a statement that impugnes the government.

"If a person makes a statement like this, he must burn his fingers," said Maake.

After much vigorous debate about whether Maynier should be allowed to proceed, he was finally given the chance to continue speaking.

"I think it is an incontravertible fact that President Jacob Zuma misled Parliament on the deployment of the South African National Defence Force in the CAR," he said.

Maynier said that in his first letter on the reason for the deployment of soldiers in the CAR in January, Zuma had stated it was to help with capacity building, assist with disarmament, demobilisaton and reintegration.

In that letter, Zuma had said that the expected expenditure for the mission would be R65-million.

After opposition in Parliament had queried this figure, Maynier said Zuma had sent a second clarification letter to Parliament. In this second letter, Zuma "conceded" that it would cost South Africa R21-million a month to deploy the soldiers, he said.

And Maynier said that Zuma had further contradicted himself, when he also stated in the second clarification letter that he would revise the protection element of the mission to the CAR, if the situation improved. The "protection element" had not been mentioned in the first letter to Parliament, he pointed out.

After the gravity of Maynier's statement was briefly discussed, Maake turned on him and said: "I think it is fair that you withdraw, and apologise."

But Maynier was having none of it. "I refuse to withdraw and apologise," he replied.

The committee decided the parliamentary records would be studied and the issue of what Maynier had said, as well as the letters from Zuma, would be dealt with at a later meeting.

Later Maynier said he believed the committee meeting, which had been called while Parliament was in recess to discuss the matter of South Africa's engagement in the Central African Republic, was "a disgrace".

"The fact is that today, the committee was a national and international embarrassment. The Minister of Defence and Military Veterans Nosiviwe Mapisa-Nqakula led the briefing and was available to respond to most questions from members of Parliament," said Maynier.

"However, Jerome Maake, chairperson of the committee, who was remote-controlled by the ANC’s deputy chief whip Mmamaloko Kubayi, tried desperately to make sure that the hard questions were suppressed, and eventually that the meeting was closed."

The meeting ran from midday and promptly closed at 3pm, after some committee members complained they had planes to catch.

Maynier said the joint standing committee on defence did not have the capacity to properly investigate the SANDF's "disastrous deployment in the CAR".

"This reinforces the point that what is required is the establishment of an ad hoc committee, comprising of members of the portfolio committee on international relations and cooperation, as well as the joint standing committee on defence, to investigate the deployment of the South African National Defence Force to the Central African Republic," he said.

At a memorial service for the 13 fallen soldiers this week , Zuma said his critics were "peddling various unfounded allegations and conspiracy theories".

"We reject any insinuation that these soldiers were sent to the CAR for any reason other than in pursuit of the national interest and the interests of the African continent," he said.

South Africa's national servicemen died for a worthy cause, Zuma told the gathering.

"They died in defence of the country's foreign policy," said Zuma. "They died defending our commitment to the renewal of the African continent, and to the promotion of peace and stability."