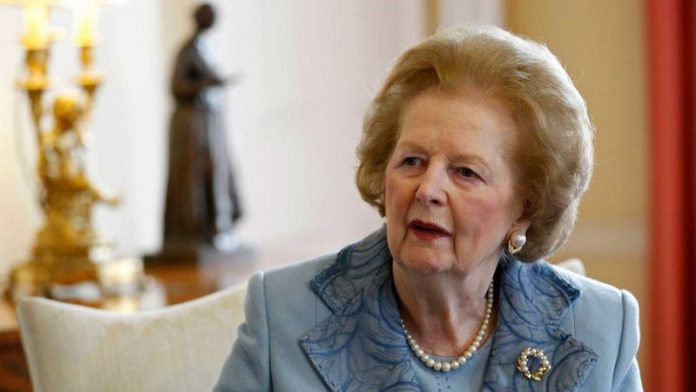 "It is with great sadness that Mark and Carol Thatcher announced that their mother Baroness Thatcher died peacefully following a stroke this morning," Lord Tim Bell said.

Britain's only woman prime minister, the tough, outspoken Thatcher (87) led the Conservatives to three election victories, governing from 1979 to 1990, the longest continuous period in office by a British prime minister since the early 19th century

British Prime Minister David Cameron said on Monday it was with great sadness he had learnt of the death of Thatcher. "We have lost a great leader, a great prime minister and a great Briton," Cameron said. Cameron cut short a trip to several European countries after the announcement, a spokesperson for his Number 10 Downing Street office said.

Queen Elizabeth also expressed sadness and said she would be sending a private message of sympathy to the family.

The British government said a ceremonial funeral with military honours would be held for Thatcher.

The ceremony will not be a full state funeral, in line with her family's wishes. It will be held at London's St Paul's Cathedral. No date was given and further details will be released over the next few days.

"A wide and diverse range of people and groups with connections to Lady Thatcher will be invited," Cameron's office said in a statement.

"The service will be followed by a private cremation. All the arrangements being put in place are in line with wishes of Lady Thatcher's family."

President Barack Obama mourned the late Margaret Thatcher on Monday, saying: "America has lost a true friend" who strengthened US ties with Britain and helped win the Cold War.

As prime minister, Thatcher was an important ally to American leaders throughout the 1980s, developing close ties with presidents Ronald Reagan and George Bush. "With the passing of Baroness Margaret Thatcher, the world has lost one of the great champions of freedom and liberty, and America has lost a true friend," Obama said in a statement.

Obama, who has two young daughters, Malia and Sasha, said Thatcher, a grocer's daughter who rose to become Britain's first female prime minister, "stands as an example to our daughters that there is no glass ceiling that can't be shattered."

Thatcher was closely aligned with Reagan in building up defenses against the Soviet Union, policies that were seen as important to the eventual breakup of the Soviet bloc and the end of the Cold War. "She knew that with strength and resolve we could win the Cold War and extend freedom's promise," Obama said.

"Here in America, many of us will never forget her standing shoulder to shoulder with president Reagan, reminding the world that we are not simply carried along by the currents of history – we can shape them with moral conviction, unyielding courage and iron will," he said.

Background
Thatcher was Britain's first female prime minister and served three consecutive terms in office. Margaret Hilda Roberts was born on October 13 1925 in Grantham, Lincolnshire, the daughter of a grocer.

She studied at Oxford University and qualified as a research chemist, retraining to become a barrister in 1954.

In 1951, she married Denis Thatcher, a wealthy businessman, with whom she had two children.

Thatcher became a Conservative member of Parliament for Finchley in North London in 1959, serving as its MP until 1992.

After the Conservatives were defeated in 1974, Thatcher challenged Edward Heath for the leadership of the party – and won.

In 1979, the Conservatives came to power and Thatcher became prime minister.

Thatcher's policies succeeded in reducing inflation, but unemployment dramatically under her rein.

Thatcher won a landslide victory in the 1983 general election.

In 1984, she narrowly escaped death when the IRA planted a bomb at the Conservative party conference in Brighton.

Thatcher was nicknamed the "Iron Lady" by the Soviets. She warmly welcomed the rise of Soviet leader Mikhail Gorbachev.

In the 1987 general election, Thatcher won an unprecedented third term in office. But controversial policies divided the Conservative Party. In November 1990, she agreed to resign and was succeeded as party leader and prime minister by John Major.

In 1992, Thatcher left the House of Commons. She was appointed a peeress in the House of Lords with the title of Baroness Thatcher of Kesteven and continued giving speeches and lectures across the world.

In 1995 she became a member of the Order of the Garter, the highest order of knighthood in England.

After a series of minor strokes, Thatcher retired from public speaking in 2002. – Reuters, BBC