Napier: I don’t know any gays 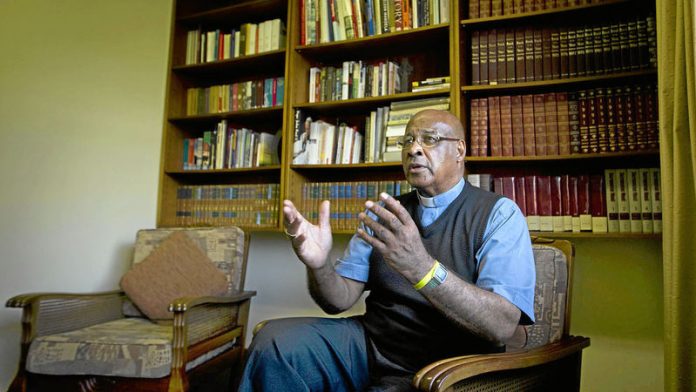 'I can't be accused of homophobia," says Wilfred Napier, "because I don't know any homosexuals."

The admission is the starkest sign in a lengthy interview that the 72-year-old South African cardinal of the Roman Catholic Church and Archbishop of Durban is unshaken in the face of criticism over his remarks in a BBC interview that he believed paedophilia was a "psychological condition" that needed to be treated.

It took more than two weeks to set up the interview with Napier. The main cause of the delay was the church's holy week, which came after the unholy row caused by Napier's interview with the BBC after the appointment of the new pope last month.

To say Napier has had an interesting past few months is an understatement. In late February he travelled to Rome to bid farewell to Pope Benedict, who was retiring, and personally thanked him for the role he had played in the Catholic Church in general and on the African continent, which he visited twice.

This was followed by his participation in the election of the new pope, Jorge Mario Bergoglio of Argentina, now known as Pope Francis.

Then all hell broke loose when the BBC reported that Napier's remarks to journalist Stephen Nolan.

Happy with the election of Pope Francis
The last thing he probably needs after all the drama is to be confronted by a dictaphone and laptop-wielding Muslim woman journalist, clad in a headscarf and accompanied by a photographer. But he doesn't project the slightest tinge of apprehension as he leads us to a small, comfortable lounge at his base, the Diocesan Chancery in Gordon Road, Durban.

Dressed in a blue short-sleeved shirt with clerical collar, a black waistcoat, dark formal slacks and sandals, the first thing he does is to hand me a typed statement – his response to the infamous BBC interview. He would return to it in our interview but it's the first sign that he's still reeling from the aftershock of the global reaction to his discussion with the broadcaster.

That's not all I'm here to chat about, I tell him.

He's "absolutely not at liberty" to reveal who he voted for but he was happy with the election of Pope Francis, he says as he looks me directly in the eyes. In the days leading up to the election of Pope Francis, Napier was involved in a series of meetings with cardinals from all over the world. One of the issues that featured ­prominently was the media's ­portrayal of the Catholic Church, which has an estimated 1.2-billion members worldwide.

"We discussed what needed to be done to address such portrayals if they were true or to counter them if they were untrue," he says.

Ironically, not long thereafter, it was the cardinal himself who catapulted the church back into the headlines with the BBC interview and the subsequent fallout. He maintains that the interview was engineered to suit Nolan's agenda and that the subsequent media reports misrepresented what he told Nolan.

"Firstly, the BBC asked me to come and do a programme about the election of the pope and then they engineered it to go in another direction," he says. "Two minutes out of the 17 were about the pope, the rest was about sexual abuse.

Psychiatric disorder
"What they said in headlines was that a South African cardinal says paedophilia is a medical condition not a criminal condition. Well, if you google the term, firstly, the definitions you find state that it is a psychiatric disorder, so the definition we go by when we [the church] deal with cases of child abuse is that paedophilia is a medical condition that an adult who has recurring intense sexual urges and fantasies about engaging in sexual acts with prepubescent children, aged 13 years and less, has.

"When a paedophile acts out those urges and fantasies, it becomes a crime. But if he does not, it's a medical condition. It's not a crime to have it if you're not acting on it. Sexual abuse of children is what the crime is, not having the condition. The crime is living out the condition."

Even if the Catholic Church imprisoned all offenders, when they're released "they'll do it again unless they're treated", he says.

I point out that some psychologists scoffed at his theory that individuals who have been sexually abused go on to abuse others.

"I didn't say there was evidence that people who were abused go on to abuse. I said there was one case I knew of where someone had been abused and went on to abuse, and I asked what should be done with him.  What do you do with the abused who has become an abuser? He was a victim too. I raised this question with the BBC and it became my position."

Napier is vague about the exact number of sexual abuse complaints his church has dealt with over the years. But during our meeting he frequently outlines and reiterates the procedure followed when a ­complaint is lodged.

"If a case comes up, I write a decree authorising a committee [that includes psychologists and lawyers] to investigate it. [If they find the complaint has merit] we advise people to go to the police, or we ourselves go to police. If the police want to, they take it up but, if the complainant doesn't lay a charge, the police cannot act. It is then that the church will report the case to the Vatican. Thus the decision of what to do with the offender has been taken away from the bishop."

Church being ridiculed
He claims the media has conveyed an inaccurate impression that the Catholic Church is doing very little to counter sexual abuse and points out that, even before the protocols were finalised in the late 1990s, he advised two priests who admitted to sexual offences to apply to Rome to be laicised and they were freed from ecclesiastical control.

Once we have exhausted the subject of sexual abuse, we move on to other issues that have led to the church being ridiculed.

Contraception is still a no-no because the purpose of marriage is procreation, he explains. But natural family planning is allowed. Essentially, this means a couple should postpone having sex when the woman is known to be at her most fertile, until they are ready to conceive. He stresses that conception should be a collaborative decision. "It's actually about the couple getting pregnant, they deal with it as a couple and it actually enriches the marriage."

I ask him whether he is concerned about the repercussions of making that statement to a journalist commissioned to write about his views.

He doesn't mince his words: "If we don't articulate this as the church, it means we have to shut up shop. Freedom of expression seems to work if you say what is deemed to be politically acceptable. You can say the most outrageous things but you can't articulate these basic principles that most religions and cultures also have.

Church's relevance
"Secondly there's revelation – the Bible says man leaves his father and mother and clings to his wife, so this is how Jesus defined it. There's something radically wrong with a society that can go against what revelation and reason says."

Napier does not hold back: "We are trying to invent something. As far as church is concerned, sexual activity is for within the confines of marriage; for procreation and the building up of the relationship between the couple. You can't practice in the Catholic Church if you aren't ­married and are sexually active.

"With the same-sex marriages, we are carrying out someone else's agenda. It's a new kind of slavery, with America saying you won't get aid unless you distribute condoms, legalise homosexuality …"

How can the church maintain its relevance in a world where issues it takes a stance against – such as same-sex marriages and abortion – are deemed by many countries as being a matter of personal choice?

"It's not about whether the church is relevant. It's that the message it's committed to conveying is more than relevant – that God created us for a very special purpose which He's entrusted to us."