Limpopo toilets are still the pits 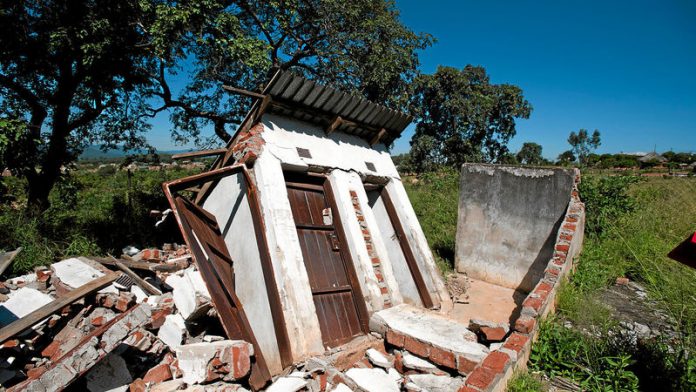 It is breaktime and the playground is full at Baropodi Primary School in the rural Limpopo area of Jane Furse. About 20 young schoolgirls sift through paper thrown on a half-burnt pile of rubbish. They are looking for the cleanest pieces to use as toilet paper.

About four metres away, their peers have already chosen their paper and are sitting on concrete blocks with holes in them, relieving themselves. When the wait for these pit toilets becomes too long, some of the girls squat down in the dirt.

These toilets do not have walls. But no one bats an eyelid at what is happening in full view of the whole playground.

This is one of 16 schools visited by rights organisation Section27 last week, following up on the Limpopo education department's promise earlier this year to build new toilets at 215 desperate schools by July 24 ("Section27 threatens more court action over Limpopo schools", Mail & Guardian, February 15).

The M&G joined Section27 on its trip last week to speak to school governing bodies and found that only one of the 16 schools showed any signs of construction.

Some of the schools did not even know there was a departmental plan to address the overflowing, collapsed, putrid mires that thousands of pupils use as toilets every day.

At Baropodi Primary, the toilets were once enclosed by walls, but a storm two years ago ripped them down, leaving just the concrete blocks. Next to the holes is a row of enclosed pit toilets. They smell so bad the pupils prefer to relieve themselves behind the structure, grade seven pupil Lerato Matlala told me.

"We feel so bad. It's been like that for two years. I think to myself, 'I can't go to the toilets because it smells so bad'," she says. 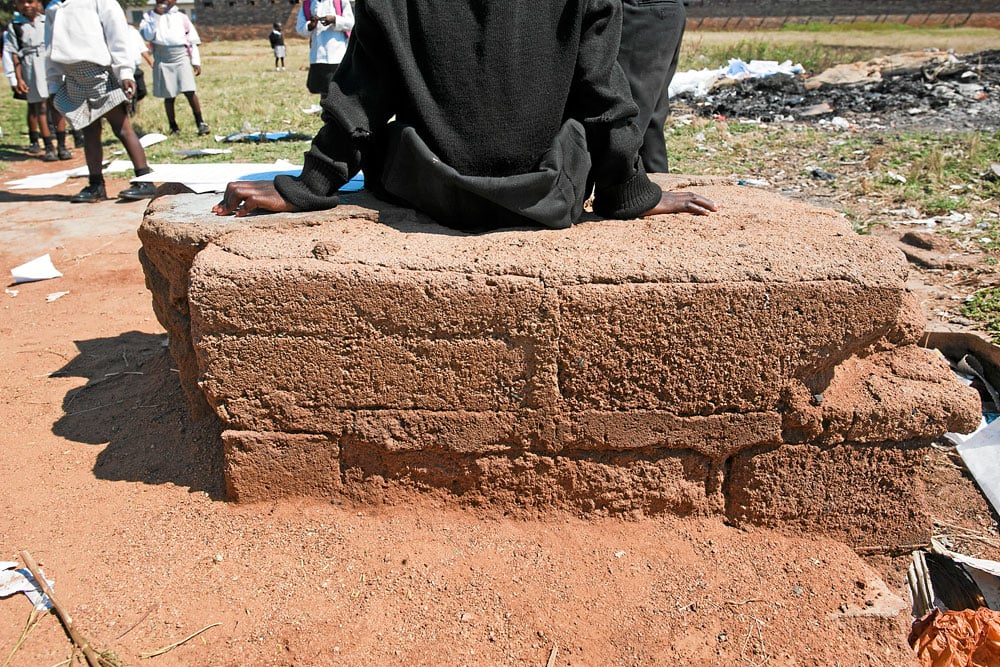 A pupil relieves herself in an uneclosed pit toilet at Baropodi Primary School. (Madelene Cronjé, M&G)

No electricity
There is no electricity in the cubicles, so when the pupils do use them, they leave the doors open to let some light in.

This school is one of the 215 identified to receive new toilets. According to the department's school water and sanitation programme implementation plan, the school should have handed over the site to implementing agents by now and work on "surveying and borehole siting" and "drilling and blow pump testing" should have started.

On our visit to Baropodi, we discover that the school's governing body does not even know there is a sanitation plan.

Construction has started, however, on four flush toilets, as part of a separate plan by the department. But there is no water system at the school, the governing body told us.

Next to the enclosed toilets is the exposed pit of what once were toilets. The pit is filled with rubbish now, but the schoolboys still relieve themselves in it. 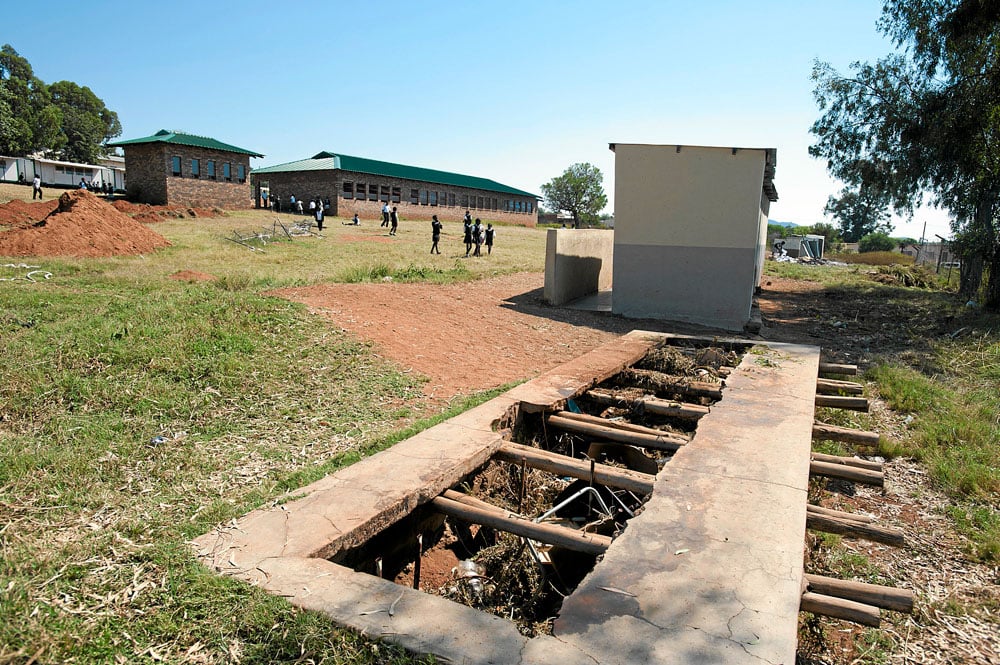 Mashoto Paile, a grade seven pupil, tells us about a girl in her class who had started menstruating. When she needed to clean herself, the teacher asked the whole class to leave the classroom and go and wait under a tree while this pupil washed herself in the classroom using water in a plastic basin.

Mahlogonolo Mathotho, another grade 7 pupil, is worried about the "germs in the toilets".

Section27 says it first wrote to the basic education department in September last year to ask for a meeting to discuss the shocking state of infrastructure at the province's schools. It was granted the meeting only in November.

The basic education department, which took over the running of the province's education department in late 2011, agreed at the meeting that it would come up with a plan to address sanitation problems, among others, by the end of January. The organisation received the plan only in March. Its questions about this plan, including what criteria were used to identify the 215 schools in need of immediate help, were never answered, it says.

"There seems to be no urgency in addressing the sanitation needs of schools," says Section27 attorney Nikki Stein.

"There are schools whose toilets have collapsed completely and that have seen no progress in the implementation of the sanitation plan. One school whose teachers and pupils have to walk 2km to relieve themselves in the bushes is not even included in the sanitation plan."

Piles of rubble, exposed waste
The walls of the girls' toilets at Muthurwana Secondary School are propped up at a 45-degree angle to the ground. They collapsed during heavy rains late last year. Inside those walls are piles of rubble and exposed waste.

Although this school is also on the priority list of the 215 to get new toilets, no signs of construction can be seen. The school's governing body confirmed that no work had started, Section27 says.

The organisation will take up its findings with the department.

The provincial education department has not responded to questions about these specific schools, but according to Tsholoselo Diale, the spokesperson for the national department of basic education's accelerated schools infrastructure delivery initiative, progress is being made in addressing sanitation needs in the province.

These projects are over and above projects implemented by the provincial education department.

At Jaji Secondary School in Madobi, some pupils learn in classrooms with leaking roofs. How do they learn when it rains?

"We learn here with the water … and umbrellas," said Culture Hlungwana, a grade 12 pupil, gesturing to the broken classroom floor and the ceiling.

"We don't concentrate so good when it rains. It feels so bad."

He said the pupils then lost out on study time when it stopped raining because they needed to sweep the water out of the room.

At midday at a school in the Vhembe district, whose staff asked that it not be named, the pupils in one classroom were lounging in their seats, playing games and shouting so loudly they could be heard from the school's gate.

Taught under trees
The teachers in the staffroom said the department had not provided the school with clerks so teachers used teaching time to catch up with administration.

That was what the teacher of the class making the racket was doing when I visited, they told me.

For years, pupils at the infamous "tree school" in Silvermine were taught under trees, but following an exposé by the Sunday Times last year, private companies provided five mobile classrooms and two port-a-loos. However, no one dug pits for the toilets, the school's governing body said, and the donations stopped short of furniture. "The department took furniture from other schools and gave it to us but there is not enough," said Evans Seanego, the deputy chairperson of the governing body.

In one classroom, the pupils had to kneel on the ground, writing in books that they put on chairs in front of them. 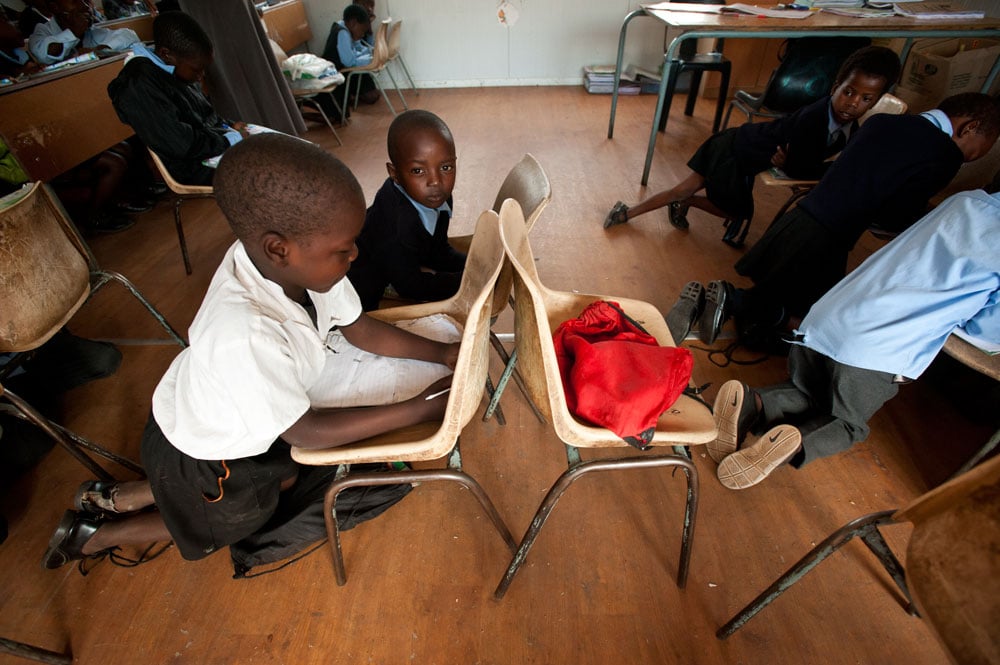 "At the end of November, they said they were going to build two buildings for us and it would take three months, but still nothing," Seanego said.