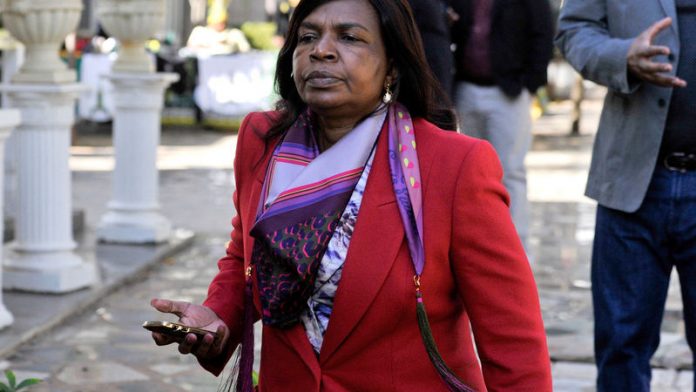 Pule has been the subject of months worth of stories of alleged impropriety in her department by three investigators at the paper, which have resulted in two official probes. On Monday, Pule said the investigators were acting on behalf of "handlers".

In a statement released on Monday evening, Oppelt called on Pule to provide proof that the journalists were acting on behalf of “handlers” during their reportage of the minister. If the minister could not do this, Oppelt said, she should publicly apologise.

Pule said that, through a network of nameless “associates”, “family members” and “friends” of the investigative team, the journalists were being “handled” by those trying to influence a tender to supply and distribute set-top boxes, a device that converts digital broadcasts for standard televisions.

At first, she also kept the names of these “handlers” anonymous by claiming she had obtained legal advice to do so.

But later at the same briefing she said she did not have to produce proof of her allegations because the Sunday Times had, in her opinion, not produced proof of theirs.

Oppelt said she was playing the man and not the ball.

“We find it unfortunate that rather than dealing with the essence of the claims against her, she proceeds to attack the messenger of the stories. We also find it disturbing that the minister would use her office to call an ‘important’ press conference, as she did today, to launch a personal attack on both the Sunday Times and its journalists,” Oppelt said.

“The numerous articles this newspaper has written about Pule in the last year have been in the public interest, with no other motivation in mind. If the minister has any evidence to the contrary, we invite her to give this to the newspaper so we can deal with it appropriately.”

The case against Wa Afrika, according to Pule, was that he was previously involved in a cellphone business; was related to Pule’s boyfriend; and that he called a meeting with the minister, allegedly to try and blackmail her into giving him inside stories about President Jacob Zuma.

Deals and meetings
Said Oppelt: “When it comes to the allegations against Mzilikazi wa Afrika, the minister accuses him of being involved in dealing in cheap Chinese cellphones. He has no such business interests.

“Secondly, she claims Wa Afrika had set up a meeting on June 19 2012. The truth is that her alleged boyfriend, Phosane Mngqibisa, had initiated the meeting with the Sunday Times to discuss the stories we were writing about Pule. Mngqibisa had, in fact, asked the businesspeople whom the minister describes as ‘handlers’ to attend. If the minister has evidence that these businesspeople were somehow attempting to influence the Sunday Times, please can she name them and their interests in an open forum," Oppelt said.

“Wa Afrika did not offer to suppress any further stories in exchange for information. Such an offer would be absolutely unethical.”

Oppelt said Wa Afrika came to know that a distant relative had been involved in a relationship with Pule.

“[This is] a relationship she now denies ever taking place. However, Wa Afrika was not aware of this relationship when researching and writing our initial stories. He obtained no information from this relative at all,” Oppelt said.

'Special adviser'
Pule went on to accuse Stephan Hofstatter of trying to plant someone close to him in Pule’s office, as a “special adviser”, to extract information.

“The truth is that this person contacted Hofstatter and informed him that Pule had asked her to take a job as a ‘reputation manager’, and said that should this happen, she would not be able to provide him with information about the minister or her department,” Oppelt explained.

Rose was accused by Pule of being close friends with someone who works at a telecommunications company.

“He has no such close friends at these places, only contacts and sources who he speaks to regularly in the normal course of his job,” Oppelt said.

“Minister Pule continues to avoid clarifying the key issue – the nature of her relationship with Mngqibisa, who was then paid R6-million by the organisers of the ICT [information and communications technology] Indaba. She has threatened to both sue and report the newspaper to the press ombud … Even though our stories have been published for the past 10 months, she has done neither. When Mngqibisa reported the Sunday Times to the ombud last year, his complaint was dismissed. The ombud said that ‘in light of their silence about the nature of their relationship, the newspaper cannot be blamed for thinking that the facts pointed to a personal one’," she added.

'Do the right thing'
“We urge the minister to provide the Sunday Times and the public with proof to substantiate the allegations she made today. If she cannot, she should do the right thing and publicly apologise,” said Oppelt.

Pule’s affront came a day after another Sunday Times exposé, in which the minister was alleged to have interfered with recruitment in her department, as well as tender processes.

But her troubles really began in June 2012, on the day Pule alleged Wa Afrika’s “associate” asked for the meeting.

The Sunday Times team was short-listed for a Taco Kuiper award for their exposé, which alleged Pule had given her boyfriend access to funds raised from the ICT Indaba. It was alleged that this money was used to purchase a pair of designer, red-soled Christian Louboutin shoes.

In a subsequent story, the minister wore the said shoes to the opening of the indaba. The shoes were allegedly purchased by Pule’s boyfriend in Spain.

Further investigations
Pule’s role in the indaba, and whether or not her boyfriend benefitted from it, is currently the subject of a probe by Parliament’s ethics committee.

It was this investigation, as well as an investigation by the public protector, Pule told journalists on Monday, that prevented her from taking any more questions on the matter.

She said that these investigations were also the reason she did not speak up about the Sunday Times’s journalists alleged breach of ethics.

But since the Sunday Times published allegations against her despite the ongoing official investigations, Pule said she saw no reason not to release her own allegations.

While Pule claimed she would report the Sunday Times to the press ombud, she admitted that her allegations of “bribery” were not reported to the police, and that she had no intention of suing the paper.