I walked the streets of Watertown, Boston when I was a child 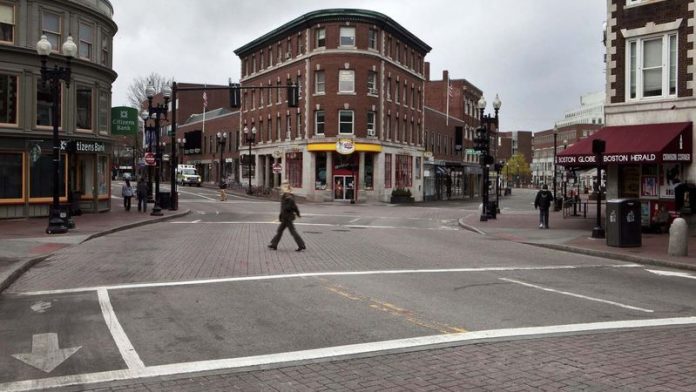 Boston Marathon? I had no idea what to think. Our TV wasn't working so my husband and I looked at his iPad to see what we could find. YouTube gave us the first video footage of the bombings, which had happened less than an hour earlier.

I called my parents in the Boston area. My dad was out for a walk and my mom hadn't heard a thing. They heard the news from their daughter in South Africa.

"I guess I'll go turn on the TV," my mother said with a heavy, reluctant tone. "There is so much violence in the world."

I spent the first 22 years of my life in the Boston area in Massachusetts. From birth until age 11, I lived in Watertown, a place my parents were drawn to because of its sizeable Armenian community, complete with Armenian bakeries and grocers. Over decades, Armenian immigrants had settled there and made a life in the town.

As a teenager, I went to high school in Lexington. Then I lived in Cambridge for four years – home to Harvard and the Massachusetts Institute of Technology.

In mid-1984, after university, I travelled to South Africa and stayed for a year – an experience that would shape the rest of my life. I remember in mid-1985, as I was leaving the office where I worked in downtown Johannesburg, a bomb exploded in the building next door.

Outpouring of sympathy
A different time, place and context, but in those days my parents watched South Africa on TV every night, concerned for my safety.

I have lived most of my adult life ever since in Johannesburg – living through the tension of negotiations, the celebrations of April 1994 and the challenges of the post-apartheid order.

The day after the Boston bombings, I posted on Facebook: "Exactly 30 years ago, in 1983, I ran the Boston Marathon. I can't imagine crossing the finish line to be greeted by a deadly explosion. How terrible."

The next day, after an outpouring of sympathy from across the world, I shared an article on Facebook by Glenn Greenwald from the Guardian, quoting Gary Young: "I'm up for us 'All Being Bostonians Today'. But then can we all be Yeminis tomorrow and Pakistanis the day after? That's how empathy works."

I had great empathy for my hometown and hoped that many in the United States might now see suffering in other parts of the world with a new perspective.

Later in the week, coverage on CNN explained a manhunt for the suspects through the streets of Watertown. My mind wandered to my childhood there. Initially, we lived on Bradford Road in a "two-family" house – one family lived in a unit downstairs and we lived upstairs. My Armenian aunty, Chris, whose family had fled Turkey, lived next door.

'Watertown is in lockdown'
I walked a lot as a child – to the James Russell Lowell School about a mile up Orchard Street, to the library further on, to the Benjamin Franklin store in Cushing Square, filled with toys and stationery, and to Victory Field to ride the swings. My grandmother, Berjui Marashlian, often took me to the Eastern Lamejun Bakery to buy treats such as pistachios and dried apricots.

It seems that one of the suspected brothers, Dzhokhar Tsarnaev, was hiding in a boat in the backyard of a house on Franklin Street, about a mile from where I had lived as a child. Ironically, an immigrant to the US, he found himself in Watertown, a place of many immigrants.

I called my parents again to see how they were coping. "Watertown is in lockdown," my dad said, as casually as if he was saying he was going out to get a loaf of bread.

My sister, who now lives in Los Angeles, told me that her college professor, who lives in Watertown, had police officers and snipers positioned in his house for a stand-off.

My cousin, who also lives in Watertown, said it was unsettling to wake up to the radio telling him a search was on for the suspect.

He described the increase of military and police helicopter traffic and said he felt "a little resistance to the police state, however temporary. It doesn't sit well to be forced to stay inside and know that the police have taken over your town."

My husband joked with me, saying he should tell my parents they are lucky that he pulled me out of that dangerous neighbourhood to come to live in South Africa.

Christa Kuljian is a freelance writer, whose debut book, Sanctuary (Jacana Media), has recently been published. It is about the Central Methodist Church in Johannesburg and migration into the city

Christa Kuljian
Christa Kuljian is a Research Associate at the Wits Institute for Social and Economic Research (WiSER) and graduated with an MA in Creative Writing from the University of the Witwatersrand in 2007.
Facebook
Twitter
WhatsApp
Linkedin
Email
Telegram

Dzhokhar Tsarnaev has publicly expressed remorse for the first time since he executed the 2013 Boston marathon bombings.
Read more
World

A US jury unanimously convicted Dzhokhar Tsarnaev and found him guilty on all 30 counts related to the 2013 Boston bombings attacks.
Read more
Sport

Security has been beefed up at the 2014 Boston Marathon, a year after the bombings that killed three people and injured hundred others.
Read more
World

The White House has filled Michelle Obama's seating area at the State of the Union address with people who represent issues important to her.
Read more
World

Boston bombing suspect Dzhokhar Tsarnaev has pleaded not guilty on all charges, some of which could carry the death penalty.
Read more
Advertising
Continue to the category
Politics