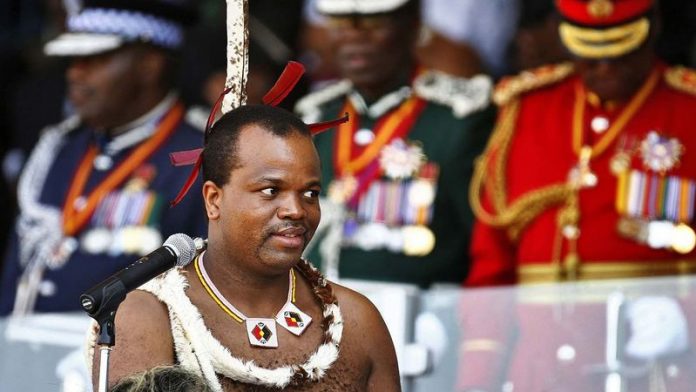 The perils of doing business with Swaziland's King Mswati III have been highlighted by the sad case of a Swazi businessman who says he was ruined by the monarch's refusal to pay the agreed sale price for his upmarket Mbabane guesthouse.

Victor Mphithizeli Ndlovu (59) said the king's office agreed in 2005 to pay R2.6-million for the property, but had only forked out R1-million. Despite this, it had been registered in Mswati's name.

Ndlovu summonsed Mswati's chief officer, Bheki Dlamini, in December 2011, but the case was blocked by a directive from controversial Chief Justice Michael Ramodibedi banning all courts from entertaining legal claims against the king or his office. Ramodibedi based his decision to shield Mswati on section 11 of the Constitution, which absolves the king from any civil or criminal proceedings.

Read More: Editorial: No rule of law for King Mswati

AmaBhungane has learned that an Egyptian company was contracted to carry out renovations to bring the 12-room guesthouse up to royal standards – at a cost of R5.5-million, according to a 2010 report by  the Nation, which also said the chief officer in the king's office once tried to entice Ndlovu to accept a lower offer than agreed by telling him that if he did the king would appoint him to some unspecified position. Ndlovu refused.

The Swaziland Law Society has cited the case in a complaint to the African Commission on Human and Peoples' Rights in The Gambia about the undermining of the Swazi judiciary.

Ndlovu, a diabetic, is now nearly blind and has other health problems. He told amaBhungane that he had to rely on relatives to pay his medical bills and for his upkeep. His financial woes started about 10 years ago, when the Swazi royal family told him to accommodate the late Queen Mamahato of Lesotho at his Prestige guesthouse in Mbabane's Beverley Hills suburb. A close friend of Mswati's mother, Indlovukazi Ntombi Tfwala, Mamahato was attending Swaziland's Marula Festival. Ndlovu was told to move existing guests so that she could enjoy exclusive use of the guesthouse for 10 days.

When Mamahato and her entourage left, Mswati kept the keys to enable his then-fiancée, now one of his 13 wives, Inkhosikati LaNtentesa, to occupy the property. Ndlovu said that she stayed for close to three years, accumulating millions of rands in bills, which the king's office failed to pay.

He said Mswati paid him R1-million as part of the arrears, which he used to pay Nedbank to avoid foreclosure on his mortgage.

The king's office then agreed that the property and all the furniture it contained would be sold to Mswati. Ndlovu's lawyer, Lindifa Mamba, placed the agreed price at R2.6-million, with R1.6-million still outstanding.

Ndlovu said that he went to the royal palace to seek an audience with the king about the unpaid balance, "but each time I was turned back with the word that the king was busy with state duties".

He said Finance Minister Majozi Sithole was eventually dispatched to inform him that he would not receive the money.

Initially, he tried to sue Sithole in his capacity as minister, who is ex officio chairperson of the board of trustees responsible for the assets of the king's office. He then served papers on the office itself, following a court ruling that he must sue the king's office, not government.

At that point, Ramodibedi's directive blocked court action of any kind.

Mamba confirmed that the summons issued in 2011 cited Bheki Dlamini, the chief officer in the king's office. However, the officials there refused to accept or ­register it.

Dlamini declined to comment. "I have been away from the office for two months," he said.

Consult
A Swazi Cabinet minister, who asked not be named, said that Mswati had personally informed him that Ndlovu had been paid in full. "The king wondered if he was being turned into a cash cow to pay up all Ndlovu's debts," said the minister. He offered to find proof of payment, but later said that he could not find it. He said he would like the dispute to go to court, where the truth would come out.

Repeated attempts to reach the acting chief executive in the king's office, Boy Dlamini, were unsuccessful. AmaBhungane finally reached the estates manager in the office, pastor Sihle Dlamini, who promised to consult on the matter. Contacted later, he indicated that he had been unable to find Ndlovu's file.

He suggested that amaBhungane send him questions and promised to forward them to the chief officer, but Dlamini had not responded by the time of going to press.

The former chief officer, Roy Fanourakis, said that after he was appointed in 2004, he made some payments to Ndlovu, which he estimated at about R1-million. He confirmed reporting on the matter to Mswati.

"The difficulty was that there was no proper paperwork and documentation and a lot of the matters raised were based on hearsay," Fanourakis said. "I paid some of the money and other amounts were to be paid later. When I left the king's office, the matter was still ongoing."  He would not comment on Ndlovu's claim to have been ruined.

Mswati's personal wealth has been estimated at $200-million.

Will editor's appeal be heard by sentencer?

It is unclear whether they intend to recuse themselves.

Makhubu was sentenced to two years in prison or a R400 000 fine last week for "scandalising" the  court with two articles he wrote, one criticising Chief Justice Michael Ramodibedi and the other the attitude of Swazi judges, including Ramodibedi, to an application by pro-democracy groups in Swaziland.

In his appeal, he protested against the trial judge's disregard for the wide latitude given to criticism of the judiciary in constitutional dispensations across the world. He also said that Justice Bheki Maphalala sentenced him before pronouncing him guilty and prevented him from pleading in mitigation.

Makhubu said he acted as a patriotic citizen concerned with promoting constitutionalism and democracy in Swaziland by informing the public, saying his criticism "was advanced in good faith and was honestly held".

He argued that his trial violated his constitutional right to be presumed innocent, to remain silent and not incriminate himself.

He also argued that attorney general Majahenkhaba Dlamini did not to have the jurisdiction to delegate the prosecution to the director of public prosecutions Mumsy Dlamini – his wife.

'Makhulu baas'
Makhubu said his article was based on the undisputed fact that Ramodibedi had called himself "makhulu baas",  a vulgarism used by mine employers in apartheid South Africa to describe white managers who issued commands to black workers.

Reporters Without Borders described the sentence as a violation of freedom of expression and urged the supreme court to respect Swaziland's Constitution, which guarantees media freedom.

In an apparent show of solidarity, Mbongeni Mbingo, the managing editor of King Mswati III's own newspaper, the Swazi Observer, published an edition with a blank front page.The president of the Swaziland Law Society, Titus Mlangeni, remarked that a judge who tried a matter in a lower court should not be allowed to hear the appeal. "This issue arises on a daily basis and the reaction from the authorities is that the judiciary is understaffed," said Mlangeni.

In 1999, Makhubu was fired from the Times of Swaziland group and charged with criminal defamation after publishing an article revealing that King Mswati planned to marry a high school drop-out. The case was never prosecuted.

In May 2001, Swazi police raided the offices of the Nation in defiance of a court order after the magazine had been banned the previous month. – Musa Ndlangamandla