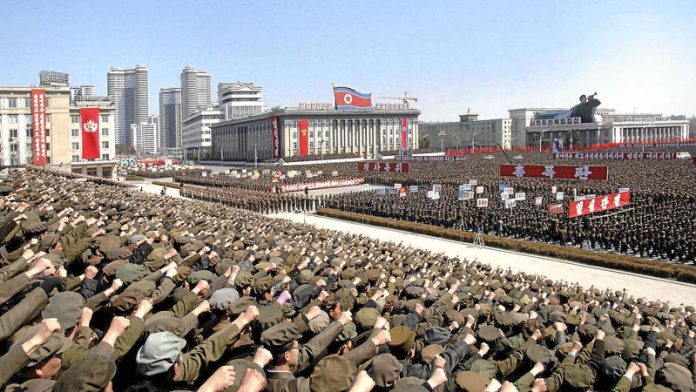 Regular visitors to Windhoek would have noticed a new addition to the skyline: the Independence Memorial, a three-legged construction, towers over a neighbouring colonial-era church and fort, and nearby parliamentary buildings, with obvious symbolism.

Built by North Korean construction company Mansudae Overseas Corporation at a rumoured cost of more than R150-million over the past three years, it is the latest in a series of prestige political projects that includes Heroes' Acre, State House and a military museum.

Just why the North Koreans have a headlock over all contracts to build national monuments in Namibia on a no-bid basis remains a mystery. Their workmanship is poor and Heroes' Acre, completed in 2002 for about R100-million, is already falling apart and undergoing renovations.

There are some obvious clues: The eight-metre statue of The Unknown Soldier towering over Heroes' Acre is very clearly that of Namibia's founding president Sam Nujoma. Like the Kims of North Korea, Nujoma venerates the mythology of military struggle, even though neither he nor the Kims ever saw much military action.

It is hazy what exactly the real nature of Namibia's official relationship with the North Koreans is. But what is clear is that North Korea enjoys something of a special relationship with Namibia's ageing leadership: each of these prestige ventures has been a pet project of Nujoma, and awarded to Mansudae without any tender. The projects include renovations to Nujoma's private home on his Etunda farm, according to documents seen by the Mail & Guardian.

"The deals between Swapo, the government and North Korea are shrouded in mystery," said Ben Ulenga, a former guerilla and Robben Island veteran, who is now opposition leader.

North Korea has no history of collaborating with Swapo during the liberation struggle from 1963 to 1989 and, as far as could be established, only established an embassy in Windhoek after the country gained independence. The first staff members, however, soon fled again after they were implicated in fraudulent car deals with Angola, and it is not even clear whether the country has any form of official representation in Namibia.

Repeated questions to the Namibian ministry of foreign affairs remain unanswered, in spite of assurances to the contrary: some areas of government policy seemingly remain beyond the ambit of any public discussion, even though Namibia has spent, conservatively, about R500-million on the Mansudae-built monuments.

A trawl through North Korea-watching websites show that Mansudae Overseas is one of about 120 foreign-trade companies controlled by the Kim family through the highly secretive Bureau 39 in Pyongyang. United States law enforcement officials believe Bureau 39 provides the Pyongyang palace economy with income of $500-million to $1-billion a year.

The US state department's bureau of research and intelligence believes that the largest part of this income is derived from trade in forged $100 bills and the alleged manufacture of drugs.