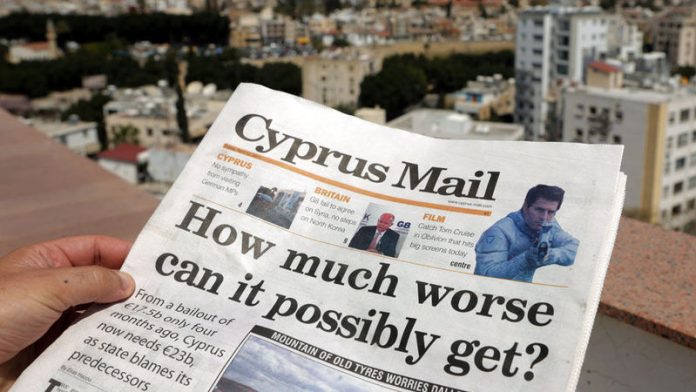 Lawmakers were due to meet in an extraordinary session to ratify the terms of the aid, which is conditional on Cyprus winding down its second-largest bank and imposing heavy losses on uninsured depositors in another. Voting was expected on Tuesday afternoon.

No single party has a majority in the 56-member Parliament, and the government is counting on support from members of its three-party centre-right coalition which has 30 seats in total. It needs 29 votes for the Bill to pass.

Cyprus, the eurozone's third smallest country, is bracing itself for at least two years of economic misery and record unemployment as terms of the €10-billion bailout deal start to bite.

Shut out of financial markets for two years, Cyprus will fall into chaotic default if lawmakers vote down the Bill, government officials warned.

"We have had enough of delusions. We don't have another choice. Whoever has one should tell us what it is," Cypriot government spokesperson Christos Stylianides told state radio.

Rejecting the Bill
Communist party Akel, in government until it lost presidential elections in February, said it planned to vote against the Bill. It has 19 seats in Parliament. The socialist Edek party, with five seats, also said it would reject it.

Attempts to agree on a bailout triggered financial chaos on the island last month, when Parliament rejected an initial plan to force both insured and uninsured depositors to pay a levy to fund the recapitalisation of two banks heavily exposed to debt-crippled Greece. Insured deposits are those of up to €100 000.

It was followed by a two-week shutdown of banks. The fallback option was to wind down one of the banks, Laiki, and impose losses of up to 60% on uninsured deposits in a second, Bank of Cyprus.

Akel, which made the initial application for financial aid in June 2012, said onerous terms offered by Cyprus's EU partners were compelling enough for the island to seek alternative sources of funding.

"Cyprus's only option is a solution outside the loan agreement and the memorandum of understanding. Seeking such a solution is possibly tantamount to a decision to exit the euro," it said in a statement. – Reuters