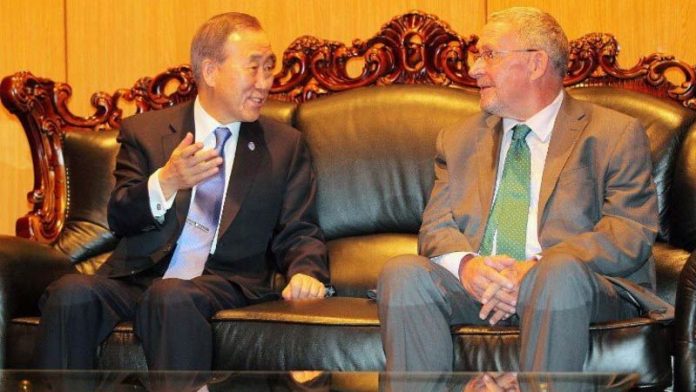 One of the most colourful men in African politics happens to be white. Guy Scott is the vice-president of Zambia but his race is probably the least exceptional thing about him.

On a recent afternoon in Lusaka, Scott held court with the kind of candour – and eccentricity – seldom heard from today's media-honed political class. He dismissed South Africans as "backward", insisted that Zimbabwean president Robert Mugabe wants to quit and discussed Zambia by way of references to Marlon Brando and the Klingon empire.

The 68-year-old grandfather was just back from Margaret Thatcher's funeral in London when he took the Guardian on an impromptu tour of an emerald auction at the InterContinental Lusaka hotel. Discussing similar auctions in India with a deferential salesman, Scott said: "Jaipur is a terrible dump. It produces nothing but zinc."

As officials fluttered around him, Scott, wearing a dark suit, blue striped shirt and blue and red tie, was informed that the Hollywood actor Mila Kunis recently visited a local mine as an "ambassador" for Zambian emeralds. "How come I didn't see her?" he pondered morosely.

Mugabe 'a funny chap'
The son of English and Scottish immigrants – his father Alexander was also an MP in Zambia – Scott then gave an interview that wasted little time on diplomatic language. Discussing neighbouring Zimbabwe, where Mugabe has ruled for 33 years, he disclosed: "I think if you asked him he'd say it was enough. That's what he said to us a few months ago. I said the way forward in African democracy is the way we do it in Zambia. He said, 'I absolutely agree, I wish it would happen to me.'"

As in lose an election? "Yes, and a smooth handover. I think he meant it, or he was toying with the idea of meaning it. He wanted to hear how it sounded, maybe. Or something."

Scott went on to describe 89-year-old Mugabe's persona. "He's a funny chap. He seems to doze off and then he suddenly laughs at a joke while in the middle of dozing. And very articulate, without a note, without a scrap of anything.

"He's an anglophone. He loves to give lectures on the English language, English weighing systems, English this or that. He was a teacher and so he taught himself all that."

Zambia's President Michael Sata – whom Scott refers to as "the boss" – is known to be on friendly terms with Mugabe, who used to work as a teacher in Zambia. "I'm sure any good African nationalist admires Mugabe," the vice-president added. "Racism in Zimbabwe is a serious issue. I was sent to school down there and it was like being in the Hitler Youth: the theories about black inferiority and this kind of stuff.

"It was a whites only school; they tried to introduce an Indian and he was hounded out at the instigation of the parents of the boys. I think Mugabe is a product of having to contend with that."

"I have a suspicion the blacks model themselves on the whites now that they're in power. 'Don't you know who we are, man?'"

Scott scoffed at the inclusion of South Africa in the Brics grouping of emerging economies. "They think in Brics that the 's' actually stands for South Africa whereas it stands for Africa. Nobody would want to go in for a partnership with Brazil, China, India and South Africa, for Christ's sake.

"I dislike South Africa for the same reason that Latin Americans dislike the United States, I think. It's just too big and too unsubtle."

Warming to his theme, Scott let rip at President Jacob Zuma, comparing him with the last apartheid leader, FW de Klerk. "He's very like De Klerk. He tells us: 'you just leave Zimbabwe to me.' Excuse me, who the hell liberated you anyway, was it not us? I mean, I quite like him, he seems a rather genial character but I pity him his advisers."

Fewer than 40 000 of Zambia's 13 million-strong population are white. Scott, a wildly popular MP for Lusaka, notes that the country has more than 80 tribes and several major language groups. "That doesn't add up to a bipolar formula for the scrap" along racial lines.

Sata-Scott leadership
Scott became vice-president in 2011 but his presence baffles some African leaders at high-level meetings. "I think they regard me as a sort of mascot, a good luck charm for African politics. Michael's very clever, he knows people tend to regard him as a racist because he talks rough.

"He's usually tried it out on me already. He says things like, 'What would you be if you weren't white?' I said, 'The president?' That shut him up."

But opposition parties have accused the Sata-Scott leadership of orchestrating violence, banning rallies, throwing dissenters in jail and dragging Zambia towards authoritarianism. Scott sarcastically predicted that opponents would complain to the Commonwealth, then the United Nations and, if still unsuccessful, the Klingon empire.

"It's a wheeze, it's an attempt I suppose based on some of the stuff that took place in Russia to denounce a government rather than eject it," he said. "But I really am very hard-pressed to find a corner I can sit in and believe that we're looking at a one-party state again."

He added: "It doesn't help that people don't know where Zambia is and they don't know what Zambia is like. If you were to write a story about America getting out of hand and going to a one-party state, everybody knows so much about the United States that they won't believe you.

"If you say, 'Somewhere over there in the African hinterland, not far from where Marlon Brando had a house surrounded by stakes with heads of his enemies on, not far from the Congo, there's a place where there's a one-party state …' Well, there probably is, probably several. And so it's a lot easier for that because there's no built-in balance."

Gay rights
One recent incident in which Zambia's civil liberties credentials took a battering, however, was the arrest of a human rights activist who had appeared on live TV calling for homosexuality to be decriminalised.

Scott admitted: "The problem with this guy going on television was that we had to do something because if we had done absolutely nothing we would have got a bollocking from all these evangelical churches plus damn idiots. On the other hand, we didn't want to give him a particularly hard ride."

As newspapers and television shows whipped up homophobia, Scott set out priorities that offer little consolation to anyone who is gay. "I think you've got so much cleaning up to do of killings and defilements and this and that, it's almost self-indulgent to think, 'Well, why don't we sit here and talk about gay rights?'

"It's indulgent politics that assumes yes, we don't actually have seven million unemployed people. Realistically, I think even an average gay, if you gave him a list of all the concerns Zambia had, would not necessarily put gay rights on top."

He went on: "There's tons of gay joints in this town. Well, not tons but they're there, well known. It's entirely the same phenonemon you get anywhere else. It's live and let live. Stirring up and making it worse, that is the biggest danger. Let sleeping dogs lie is an easier policy."

If Sata were to die in office, Scott would make history as the first democratic white leader in Africa, albeit as a three-month caretaker until an election was held. Seeking the presidency full-time would be "a bridge too far" for qualifying rules because his parents were born outside the country.

Scott, whose wife is from Greenwich, London, has health worries of his own, including a right hand that trembles slightly. "It's possibly Parkinson's, I haven't had it diagnosed yet." He is also concerned about possible cancer under one eye. "In my age group, there is on average six things wrong with you at any one time."

Scott departed, stepping into a lift and flanked by security guards, making a quip about how many emeralds he could conceal in his hand. – Guardian News and Media 2013