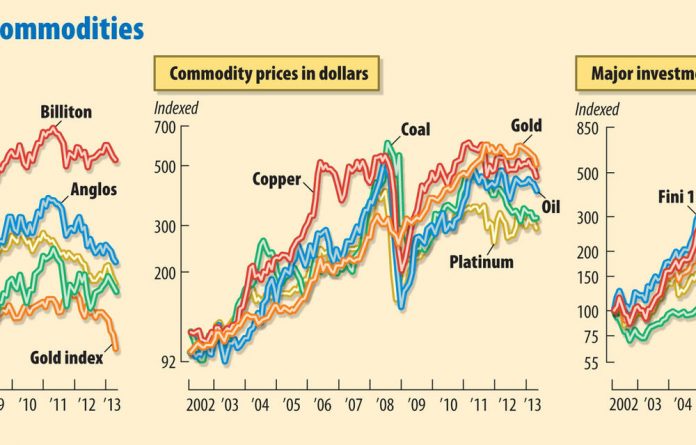 Even if it wasn't Buffett who said it, that's not important. What's really important is that someone keeps saying it. Over and over again – and louder and louder too. Because capitalism today, especially with regard to executive compensation, is probably more distorted, toxic and destructive overall to our society than anything else we've seen since the feudal days 700 years ago.

The year 2013 marks the end of the greatest bull run in commodities that the world has ever seen. In 2001, we had 9/11, which took everyone's eyes off a lot of important issues that had been pretty well managed in the 1990s. The United States then cut rates to near unprecedented low levels, stimulating a property, debt and leverage boom worldwide.

We had China and many other countries exhibit unprecedented growth rates. And even when all of this temporarily collapsed in 2008, the party started all over again with a zero interest rate and huge quantitative easing (QE) programme by most of the Western world, which further stimulated and exhausted an already terribly stretched world economic system. And the result was a boom in commodity prices and volumes never imagined by most of us.

This gave the major participants in the mining industry – government, labour, management and even shareholders – unprecedented opportunities to increase their wealth. But the dumbest guy in the room, the one stuck with picking up the tab, was the shareholder. And justifiably so, we presume, because he was the one most removed during the party.

No one spots (and acts on) opportunity quicker than people involved in a capitalist system. Management are probably quickest to exploit a run up in commodity prices, with an increase in salaries, bonuses, allowances and other expenses. Unions/ labour aren't far behind, with their double digit demands for all kinds of compensation and benefits, soon followed by governments, with their review of existing taxes, royalties, social, administrative, mineral rights, employment and other policies and practices. And another common denominator of these three? No productivity increases whatsoever!

The poor shareholder is only allowed into the room after all the spoils are gone and the bill has to be paid. And what a bill it is. Massive destruction of asset value, huge misallocation of resources and a complex, massively onerous regulatory environment, coupled with a grotesque, hugely uncompetitive cost structure in a price declining, demand falling commodity environment.

For this story to make sense it is probably best to start with where we are today and work backwards. And nothing, absolutely nothing, encapsulates a long story like a graph.

What was the result of this amazing run in commodity prices for the people who put up the money to make it happen, the shareholders? Exhibit one – the traditional investment defaults, the indexes. Exhibit two – the actual commodities. And exhibit three – the major mining houses.

If there is a positive to capitalism it may be the decent choices it presents. And, for an investor, all decisions must be made by starting from a fairly well-known (less risky) default position. And because governments have removed the traditional default of cash, most investors were easily led into bonds, property (again) and, of course, equities.

But here is where the mining industry executives differ from others. Mining executives seldom want their companies, let alone the performance of their companies' earnings, to be compared with the market, particularly specific sectors of the market. But what they don't understand (or want to understand) is that investors all have choices and their preference is for markets, sectors/industries and companies that grow earnings regularly. Everyone knows that it is earnings that generate share prices.

Yes, net asset value is a factor but it is determined by the earnings ability of a company. As long as it generates earnings, it will generally have a share price fairly close to reality.

Xstrata and its executive pay structure started the debate on executive compensation in the mining industry. So it's appropriate that we use its listing date as a starting point for the period we want to graph. Even more important (and fortuitous), late March 2002 was about the exact time that the amazing 11-year commodity boom took off. So, even though the dust from the commodity run has not yet settled, it is extremely useful to view how the average shareholder has fared so far.

How did the commodities do during the same time? The iron ore price is still up eightfold, oil 4.5 times, gold five times, copper 4.4-fold, RBCT coal threefold and platinum 2.9 times. Basically, the commodities themselves have returned over double what the RESI 10 has returned.

So if the major South African indices are still up over 130% since March 2002 and all the commodities are still up 200% and more, it's only fair to ask what the "underperforming" mining executives are getting paid for? What were the board members doing while money was being spent like water, raises and bonuses were given and all kinds of value destroying capital was spent. Did the chief executive of Xstrata and his merry henchmen, who added virtually no net capital gain in 11 years, deserve the combined hundreds of millions of dollars in compensation received during that time?

Contrast this with ex-Anglo Ameri­can chief executive Tony Trahar who was unceremoniously dumped after steering Anglo American from $15 to $50 a share from 2000 to 2006. Or the Billiton senior executives who guided it from $6 a share the day Xstrata listed (March 2002) to $32 share at end of 2012. Some performances!

Fund managers are paid (supposedly) for adding alpha – that is how many percent they add on top of the ALSI 40, Indi 25 or whatever their respective benchmark is. But what benchmark are shareholders having their mining executives measured against? How is the executive's pay linked to it? Isn't that the only fair way to measure the value the shareholders obtain from management?

Without pickling on Xstrata (one can hammer the gold company executives too) but using it as an example: Who really won from being involved with Xstrata? And who lost? Obviously shareholders gained virtually zero over 11 years if they faithfully held on. Workers? Suppliers? Government? All three certainly lived well off Xstrata since its listing. But management? Is there any senior manager who didn't become extraordinarily wealthy from just being at work during those 11 years?

The big worry in all fund managers and analysts minds now is, if Xstrata and other such underperformers made shareholders little to no money over 11 years when most commodities rose between 100% to 700%, then what kind of returns can shareholders expect if commodity prices rise less or not at all?

And no one wants even to conceive what will happen to our resource shares if commodity prices fall further from current levels. That is definitely a scenario too ghastly to contemplate.

Peter Major is head of mining at Cadiz Corporate Solutions