Bundesliga chokes on its dreams 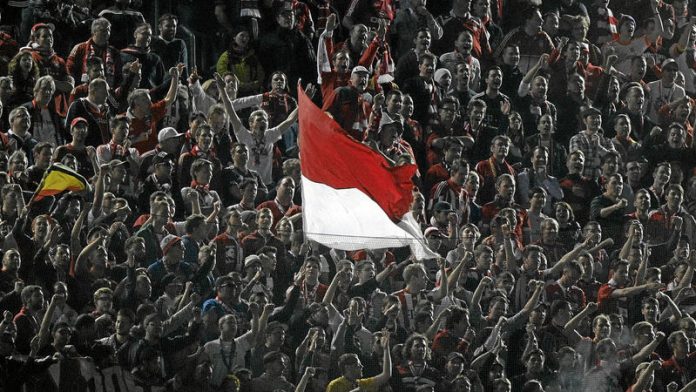 These are German football's proudest days in more than 15 years. An all-German Champions League final – Bayern Munich vs Borussia Dortmund – was confirmed when Bayern overwhelmed Barcelona, most people's favourite other team, 3-0 at Camp Nou. This was only a day after Dortmund did just enough to stave off Real Madrid, the most successful European Cup side in history, at the Bernabéu. This is a final not many would have predicted before the first-leg thrashings from the German teams, but everyone expected afterwards.

And yet. What looks from afar like chest-puffing and backslapping all around would be better described as "mixed feelings". And what is sometimes called national euphoria does in fact have strong undercurrents of divisiveness. In brief, it's a lot more complicated than it seems. As it always is.

On the one hand, Germans are very proud of how the Bundesliga clubs have performed on the biggest stage of all this season. Let's not forget that Schalke came within a whisker of making the quarterfinals, too.

After years of bitter disappointment in European club football, the current success is widely seen as a reward for doing things the right way: nurturing talent instead of spending millions on pampered stars, keeping ticket prices down to not lose your most loyal supporters, barring foreign investors from buying up the domestic game to strengthen the ties between communities and their teams, preserving collective bargaining to bolster competitiveness (there have been five different league champions in the past 10 years). In a way, the events of this month are seen as a victory for old-fashioned football clubs over multinational corporations.

The make-up of the Champions League semifinals felt like a showdown to German fans, many of whom are convinced their national team would have won each of the past three major tournaments if it hadn't been for Spain's wonder team. Which is why Sky Germany advertised their coverage of the return legs with a not-too-subtle short clip about a matador. It ends with the torero leaving the arena with two pikes – one black and yellow, the other red and white – sticking out of his posterior. The film's title was Adios Amigos.

But at the same time, in Germany, the news background is deeply problematic. The man who has worked harder for it than anyone else, the man who has predicted a major resurgence of the Bundesliga often and loudly, the man who considers this apparent power shift in the European game a triumph of justice, the man who loves to talk so much and whose tongue is so sharp that he has been nicknamed the "Attack Department", this man is now … unavailable for comment.

Supposed competitiveness
Uli Hoeness, Bayern Munich's long-time business manager and now the club's president, finds himself at the centre of a tax scandal that is making bigger headlines in Germany than anything that happens on football pitches. The ongoing investigation could have severe consequences, both for him and perhaps also for the club he has represented for more than three decades, so Hoeness has to ­circumvent cameras and microphones to avoid saying something that might come back to haunt him.

There are growing concerns, too, over where the German game is headed. This season has already seen a debate about the return of fan violence and thinly veiled threats to finally abolish terracing. And only a few days after the Hoeness tax-evasion scandal broke, a tabloid revealed that the country's biggest talent, Dortmund's young Mario Götze, would join Bayern for €37-million. It was a painful reminder that money makes all the difference in Germany, too, and that at least one of the two clubs that have represented the Bundesliga so amazingly this year are really playing in their own league.

While Dortmund have indeed built a team on youth and with smarts rather than money, Bayern have done it not unlike clubs from England or Spain – by spending more than €200-million on players in the past four years. It also casts doubts over the Bundesliga's supposed competitiveness. Dortmund coach Jürgen Klopp has already said that he expects "Scottish conditions", meaning a league in which one club is all but guaranteed to win the title.

He is not alone in fearing that the current success is merely what Germans call a momentaufnahme, a snapshot that captures a fleeting moment. At the weekend, Lars Ricken, who scored the goal that won Dortmund the 1997 Champions League, said he did not consider the Bundesliga the new market leader: "If that were the case, we'd be doing much better in the Europa League." Paul Breitner, a former Bayern legend, said: "Barcelona will bounce back, no doubt. It's not the Bundesliga that has done well this season, it's just two teams."

One of which may already be in the process of being dismantled. Dortmund lost Shinji Kagawa last year and will soon lose Götze. Robert Lewandowski, their Polish striker, has not extended his contract and is linked with many clubs, including Bayern, as is the defender Mats Hummels. It already looks as if Wembley will be Dortmund's best chance for some time to win a European trophy. It also looks as if the Hoeness drama and the Götze transfer have rekindled the strong anti-Bayern sentiments always simmering in Germany. The weekly Die Zeit said Bayern "are rearing their ugly head again", and widely read Sport Bild magazine headlined that Bayern were waging a "transfer war".

So you could forgive German football fans for feeling a bit like London punks in 1976 or Seattle grunge rockers in 1989. The world has woken up to how thrilling their scene is and suddenly they are hailed as the next big thing, but deep down inside there is the nagging feeling that the best days are already in the past. – © Guardian News & Media 2013

Ulrich Hesse-Lichtenberger is the author of Tor! The Story of German Football