Movie of the week: Stoker 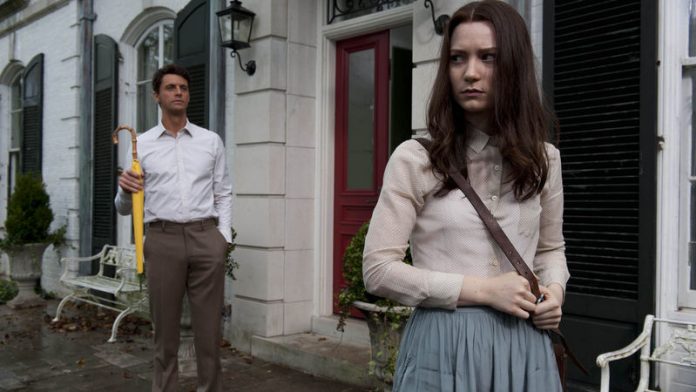 But where Hitchcock injected a small drop of poison into picket-fence suburbia, Stoker stands proud as a full-blown Gothic nightmare, replete with cadavers in the freezer and sexual ecstasy in the shower. I’m not convinced it hangs together; I’m not even sure it’s good. But its undulations cast a definite spell.

Mia Wasikowska stars as India Stoker, a pensive emo teenager and occasional huntress, and Nicole Kidman plays India’s mum with a ramrod-straight bearing and a pained crimp to her solicitous smile. Both are rattling around a grand designer home in the forest, mourning the man of the house, recently dead in an unexplained accident.

Both, in time, will find themselves bewitched by boyish Uncle Charlie (Matthew Goode), who rolls in driving an open-top sports car, spinning heady tales of his years in Europe. Walking home through a rainstorm, India surprises her mother and uncle sitting at the grand piano. “Get into some dry clothes,” suggests Uncle Charlie. “Then come play with us.”

Park snagged a global audience with his 2003 film Oldboy — an exotic revenge fantasy in which the ill-starred characters commit incest and consume a live octopus. Stoker, though, is an altogether less confident, more stumbling enterprise. I had the sense that Park was toiling to adapt his sculpted, florid aesthetic to the American milieu, and struggling to communicate with the actors as well (all three stars perform in a kind of extended disarray).

But the film finds its feet in the hysterical final act. Beneath all the silk and powder, it transpires that Stoker is actually no more than a schlocky, screeching B-movie — an animated skeleton sent up to spook us. It’s at its most entertaining when it shakes off its clothes. — © Guardian News & Media 2013