Left to their own (clever) devices 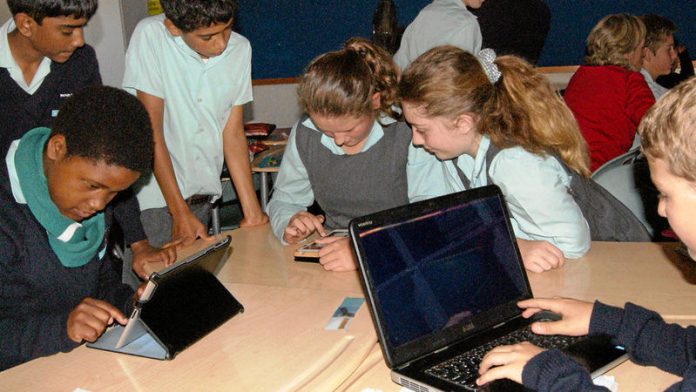 'A computer is just a pencil in the pencil box," says Chris Storey, headmaster of Somerset House.

His Somerset West primary school has rejected the current vogue of introducing identical tablets, such as iPads, into senior primary classrooms and allows its learners to bring any device of their choice to school.

"Instead of asking how schools can use a particular tablet or app, we asked how we could use computing devices to enhance teaching and learning." Storey said. "We want children to use technology responsibly and effectively in a way that is close to what they will experience when they finish school."

But the results after six months — published in an in-house survey of 89 pupils, 10 staff and 52 parents — were unequivocally positive. The majority felt the devices improved teaching and learning, and enhanced learners' independence, responsibility, research skills, creativity, enjoyment and time management.

Asked to choose the best device for schoolwork, 69% of children chose laptops or notebooks — for ease of writing and researching — over the supposedly cooler tablets. No devices were stolen (although a few were temporarily mislaid and one was stepped on).

Storey said there had been no device envy. "In fact it's quite astonishing how the kids share. I've asked a child how long he's had this netbook and he says: 'It's not mine, I'm borrowing. I type quicker but she's better at editing photographs.' They're very good at working in a group effectively by finding people's strengths."

A few children do not have their own devices and use the PCs in the English classroom and information and computer technology (ICT) centre when necessary.

"Bring your own device" (BYOD) is an international workplace term, Storey discovered after his team had decided to adopt this approach. The concept works in Somerset House, firstly because of a R3-million investment in technology to ensure a stable ICT platform with fast and reliable wi-fi.

According to Nicholas Simpson, business manager of Cape Town company Integrated Equipment, a 1.2km fibre optic cable supports a centrally managed wireless system that controls more than 40 wi-fi access points. "Once a device connects, the user can literally walk anywhere in the school grounds and stay connected," he said.

Second, the school has linked BYOD with project-based learning in social sciences (that is, history and geography). Learners research and solve real-life problems using their computing devices and develop critical thinking, collaboration, creativity and communication skills.

A guide on the side
Teacher Michele Botha — with 25 years' experience in "talk and chalk" teaching — is now "a guide on the side" and uses the free Edmodo education website (www.edmodo.com) to load content, videos and set tasks for her pupils.

The grade sevens are compiling presentations to an international youth summit on how to manage a range of recent natural disasters. The grade sixes must tell the World Bank why a (mythical) plan to build a straight road from Tunis to Cape Town won't work.

Botha said project-based learning demonstrated "the beauty of BYOD". "The children always gather around the most appropriate device. If they need quick information they're on their phones. To generate content they're on a laptop or a school PC. If they're looking for images they're on an iPod or tablet. To make a quick movie invariably they go with iMovie. And the transition between the devices is seamless. They don't think; they know the pros and cons."

English teacher Jenny Martin has created her own website, reach­ateacha.weebly.com, on which she provides multimedia background resources to novels, sets challenges and posts pupils' work. She gives homework by posting articles on her blog. Children must comment on specific issues using coherent, grammatically correct sentences.

Much of the work — for Martin, Botha and their pupils — takes place at home. "It creates a flip classroom situation, where the children do the lesson at home and at school they do the reinforcement — the opposite of what we normally do," Storey said.

"I'm always facing the children," Martin said. "It's very much a one-on-one engagement with them. The depth of work is far deeper because you can use primary sources and it just brings the world into the classroom."

No one falls behind
Schoolwork can be covered at different speeds without children falling behind or becoming bored, Storey added. "You can put your weaker children in one group and the teacher will gravitate around them and hardly touch base with the high-flyers doing their own thing."

The grade sixes and sevens no longer have dedicated ICT lessons. "We don't need them anymore because the kids are learning the application while they're on the job," Storey said. However, there are no plans yet to extend BYOD to lower grades, which still attend regular computer classes.

Somerset House is a privileged independent school with 450 pupils, but Storey thinks its BYOD model would benefit other schools too. Integrated Equipment's Simpson believes a cheaper version of BYOD could be installed in less affluent schools. "But there would be sacrifices in performance, network speed, and so on."

Simpson said Somerset House was the company's only experience of BYOD, but it was assisting a number of state schools that were "still struggling to get the basics in place — like a stable network, internet in every class or even a PC in every class".

Storey believes the fact that refurbished laptops performed better than iPads in many tasks was good news for education. "The answer is not always just to throw more money at the problem. Sometimes it's 'let's think about it'. We all use different devices at home already, but for some reason schools like everyone to be the same."