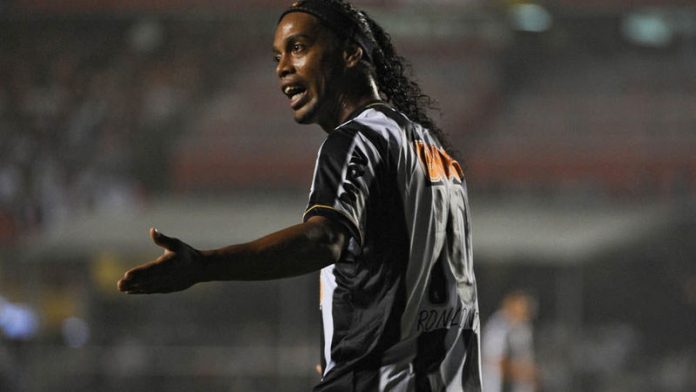 "I sincerely hope that from now on, regardless of the players who were chosen or left out, we start working together and support the national team," Scolari said.

The coach had said he would likely choose between Ronaldinho and Kaka for the Confederations Cup, and Ronaldinho apparently was set to secure his place after playing well recently and receiving widespread praise from fans, local media and Scolari himself. And while Kaka was struggling to get a chance to play with Real Madrid, Ronaldinho was making the most of his matches with Atlético Mineiro in Brazil.

Ronaldinho had a remarkable performance in a high-profile Copa Libertadores match last week, helping his team rout São Paulo 4-1 and advance to the quarterfinals.

"When I make my choices I think about what I can gain and what I can lose," Scolari said. "I make the decisions taking into consideration what is best for the team."

The 33-year-old Ronaldinho was a starter in Scolari's team that won the 2002 World Cup in South Korea and Japan. He played in three of the five matches since Scolari took over the national team in December, missing a penalty kick in the 2-1 loss to England.

Going against public expectation
"It's natural that it was difficult to make a decision, they are all great players and they all could be on this list," Scolari said. "I made the choices based on the matches we played and based on some personal criteria."

Ronaldinho, a two-time Fifa World Player of the Year, was reportedly late joining the team before a recent match with the national team, but assistant coach Carlos Alberto Parreira downplayed the incident at the time and said it was not a problem.

It wasn't the first time that Scolari went against public expectation. Before the 2002 World Cup, he left Romario out of the squad and was heavily criticised locally.

With Ronaldinho out, Brazil's hopes at the Confederations Cup will fall mostly on Neymar, touted as the future of Brazilian football. The youngster has been struggling recently with Santos, though, being jeered by some supporters both at the club level and when playing for the national team.

The surprise name in the 23-player list was young striker Bernard, Ronaldinho's teammate at  Atlético Mineiro. The 20-year-old player has been praised as a promising star in Brazil and reportedly is already considering a move to European football.

Alexandre Pato, who has been a reserve at Corinthians, apparently lost his spot up front to Leandro Damião. Hulk and Fred also were called up in attack.

Brazil plays England, France
"We all know how hard it is to make it to the national team," Atlético de Madrid defender Filipe  Luís told ESPN Brasil. "So I'm very proud that I was able to make this list."

Brazil will play only two matches before the Confederations Cup, against England on June 2 at the new Maracana and against France in the southern city of Porto Alegre on June 9.

The national team is coming off a disappointing 2-2 draw with Chile at Mineirao Stadium last month, when Ronaldinho and the rest of the team left the field under loud boos by nearly 50 000 home fans.

Scolari has called up more than 40 players for five matches since retaking Brazil's reins in December. He had a difficult start, losing to England, drawing 2-2 with Italy and 1-1 with Russia, and beating Bolivia 4-0 for his first win before the draw with Chile. – Sapa-AP

Effervescent, bright young light at the end of our tunnel