And now Africa rises, to unite in prosperity 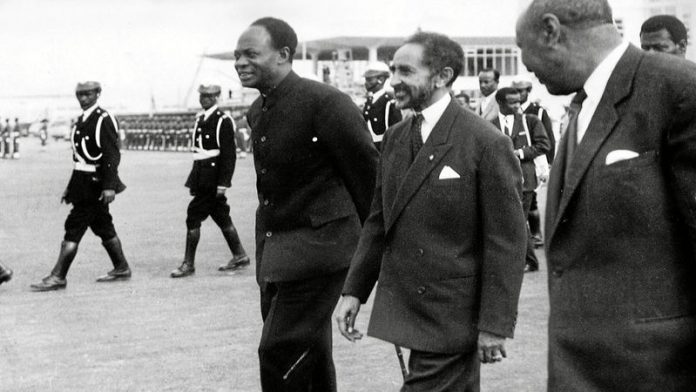 Libyan strongman Muammar Gaddafi made a half-hearted attempt at subverting traditionalism to have himself crowned the continent's king of kings.

And when the Organisation of African Unity (OAU) was constituted in 1963, several of the founders considered stronger ties between themselves as a survival strategy in a world torn between two superpowers.

The following 50 years proved that none of their motivations or justifications held water; the continent remained deeply divided along lines ranging from ethnicity to class, with only marginal movement towards integration.

But the next 50 years will be different, various thinkers and institutions believe. By 2063, they say, the continent will have moved close to full economic integration, with people and goods flowing (legally) over national borders that will exist largely as theoretical lines, rather than imposing fences. Because this time the driver will be economic necessity in a competitive world.

The result, they believe, will be utopian: a continent more productive, with faster economic growth, better levels of employment, more skilled people, plentiful food, and perhaps even a universal respect for human rights. And also, by the logic that richer and more comfortable people fight fewer wars, finally a continent at peace with itself.

That may sound much like the thinking behind the initial formation of the OAU, but a shift in logic is already well under way at its successor, the African Union (AU).

Peace and security
Born in the midst of the Cold War and before globalisation, the OAU thought geopolitically, with military might at the forefront. In an analysis of the types of policies created by the OAU and its successor, a group of researchers found that prior to 1980, 40% of the organisation's work was dedicated to peace and security.

In the decade from 2001, the number of policies dedicated to that section of the AU's work declined to just 16%. The focus had shifted to social and economic issues, with money – money for development, for education, for healthcare, for housing – at the heart of its work.

And that was despite little change in the level of conflict on the continent. The OAU was born in an era of strife; in 1963 alone, three governments fell to coups: in Benin, Congo-Brazzaville and Togo. That was also the year when open fighting started between Kenya and Somalia (the latter mostly through proxies) in the so-called Shifta War, which would continue for four years, complete with war crimes and mass casualties.

But the AU, too, was created with wars raging. In the decade it was constituted, and the OAU disbanded, there were civil wars in Côte d'Ivoire and Chad, ongoing conflicts in Darfur, wars in the Niger Delta and the Central African Republic, and any number of border and ethnic skirmishes.

The difference, some believe, is that the world had changed in the four decades that separated the two bodies. The AU came into being with member states watching the rise of China as a world power, and India as an economic one, and with the European Union as their major trading partner. The ability of such behemoths to dominate the world could hardly go unnoticed.

"The total gross domestic product of all the SADC [Southern African Development Community] countries, including South Africa, is less than that of Turkey or Denmark," said Iraj Abedian, a policy-focused economist at the head of Pan-African Capital Holdings.

In unity lies strength
"You find yourself asking, if the entire region can't compete with a single country, how much less so its constituent members?"

Abedian is of the school of thought, which has become pervasive in recent years, that African states will be forced to unite to achieve the economies of scale necessary to compete in the global economy. As Nkrumah said, "in unity lies strength".

By the same token, the financial unity of the rest of the world poses potential problems for those determined to go their own way. "[Global] integration comes with the risks of interdependence," said the Africa Progress Panel, headed by former secretary general of the United Nations Kofi Annan, in its 2013 assessment of the continent. "African economies will be affected by market events over which they have little control."

Economically, the continent can boast neither strength nor unity.

"Today, not only is Africa fragmented by its borders, its power is also limited by the fact of this fragmentation," says Godwin Murunga, of the African Leadership Centre in Nairobi.

In order to compete, Africa requires internal trade, investment in the skills and technology that can make it more productive, an end to conflict and a reduction in overall military spending, and united policy-making at a global level. For individual countries, that means giving up at least a portion of their sovereignty. And that is exactly what leaders of the AU hope they will do.

Although the AU has yet to finalise its Vision 2063, a planning document eagerly awaited by pan-Africanists everywhere, broad outlines have become clear. Despite its recent problems, the European Union remains a political model. Much focus is on increasing agricultural productivity, then general productivity. Policy harmony on everything from telecommunications to fertiliser will be pushed, and thornier issues such as the fate of state-owned enterprises will follow.

Regional blocs will be nudged towards common passports, such as those of the Economic Community of West African States, and spending requirements – probably first on agriculture, but later on a range of priorities – will be imposed on individual countries.

So, slowly but surely, the believers have it, Africa will rise.

Some wins, some losses for the OAU

The Organisation of African Unity's original mission included a broad range of objectives.

In a precious few areas, such as gaining independence from colonial masters, it can claim unequivocal victory. In most, however, success was partial or dubious at best. According to its founding charter, its major objectives were:

A century after unity comes utopia

There are a range of visions for what the continent will look like 100 years after the formation of the Organisation of African Union – most of them positive. Between the hopes of continental bodies and views of analysts, these are some of the characteristics of that future: