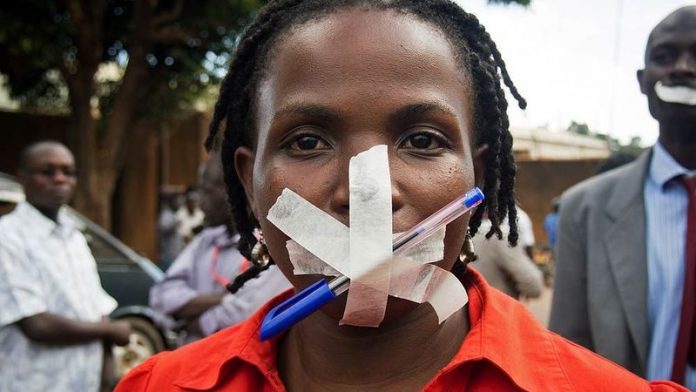 This follows reported arguments among army generals over whether the president's son is to succeed him.

Riot police scattered around 100 journalists, their supporters and human rights activists who tried to gather outside the offices of the Daily Monitor and Red Pepper newspapers, which were closed on May 20 by armed police. "This is a violation of media freedom and economic sabotage," rights activist Geoffrey Ssebaggala shouted at police.

The closure of the two papers leaves only one major operating newspaper, the government-owned New Vision.

"The police are turning violent yet this is a peaceful demonstration," said Simon Anguzu, a protestor outside the Red Pepper.

The closures came after the newspapers in early May printed a leaked confidential memo by a senior general, David Sejusa Tinyefuza, alleging that President Yoweri Museveni was grooming his son Muhoozi Kainerugaba to succeed him.

Tinyefuza said there were plots to assassinate those opposed to the plan.

Rapid promotion
​Muhoozi, a brigadier who now commands Uganda's special forces, has recently enjoyed rapid promotion through the ranks, although Museveni has made no mention of plans for him to succeed.

Last week army chief Aronda Nyakairima – listed in a leaked memo as allegedly opposing Muhoozi's possible takeover – was shifted to a civilian post as minister of internal affairs. Nyakairima, along with other generals, has since condemned Tinyefuza's memo.

The United Nations and European Union have both condemned the newspaper closures. "It's disturbing that intimidation and harassment are being used in retaliation against the exercise of freedom of expression," the UN High Commissioner for Human Rights said last week.

"Ahead of the 2016 elections, the current events may serve to reinforce self-censorship and severely constrict freedom of opinion and expression at a key moment in Uganda's political development."

It is not clear if Museveni – an army general himself who rose to power as guerrilla commander – plans to run again for the presidency in 2016. Uganda law blocks anyone aged over 75 from running for the country's top job.

The veteran Ugandan leader claims he does not know his exact date of birth but says he was born in 1947 – making him 66. Activists, however, say he is older. Media watchdogs including the US-based Committee to Protect Journalists, France-based Reporters Sans Frontieres (RSF – Reporters Without Borders) and the Foreign Correspondents' Association of Uganda have all also condemned the closures.

Despite the closure of its presses, the Red Pepper managed to sneak out black market copies, but police last week even arrested vendors selling the paper. – AFP