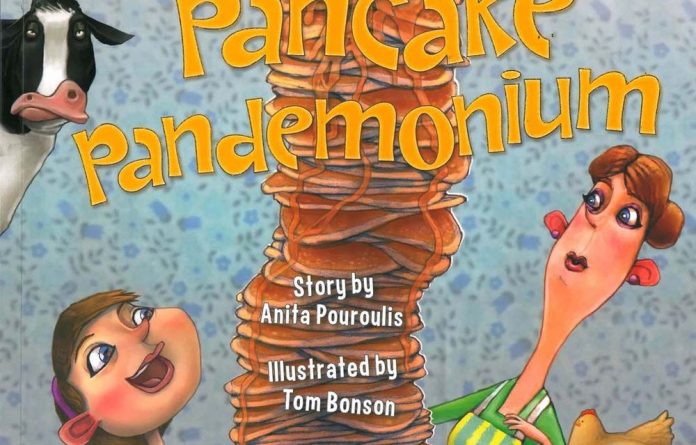 On a hilltop in Spain, between Marbella and Gibraltar, lives a former South African with a husband, a daughter and two dogs. There, in a tiny, isolated village far from the place where she was born, she weaves delightful spells with words and pictures.

Anita Pouroulis, a warm and witty former primary school teacher with a BA honours degree in clinical psychology, was born in Germiston, raised in Bedfordview and educated at Saheti School and the University of the Witwatersrand.

She had always known she wanted to be a writer, she says, and kept notebooks full of ideas, but the life of a teacher and suburban mother — first in Johannesburg, then in London — left her little time to indulge her ambitions.

It was the relative isolation of her home in Spain, without extended family or the distractions of her many South African friends that gave her the time and space to write.

"The move turned out to be the best thing for me — the stories that had been there started coming out," she says. But writing is one thing, getting "to a point where somebody wanted to publish my writing" is quite another.

Serendipity intervened, as it does in the best of stories, and Pouroulis met a creative duo in London who had recently started a digital publishing company and were looking for new talent. She persuaded them that digital was great — but so was paper.

So it is that she has now added to the library of children's literature four entertaining, quirkily illustrated books, each complemented with games and puzzles related to the narrative. The stories are also available as interactive apps, complete with memory games and animated characters.

Pancake Pandemonium, Mum's Cronky Car, Oh What a Tangle! and My Monster Mayhem are partly inspired by her daughter and partly by her memories, and they are only the beginning.

Pouroulis is now working on four more books — a series featuring a little girl and her two dogs, which she is illustrating herself.

Her work has been translated into Spanish and published in Spain, and is now also being distributed in the United States. Happily ever after indeed.

For read-to-mes and beginner readers

Polly is a pancakaholic, she can't get enough of her favourite food. So when, one day, the cupboard is bare and she hasn't the ingredients to make a batch she comes up with an ingenious plan to ensure that she will never again have to go without.

But, like many brilliant ideas, this one proves to be better in the mind than in the execution and Polly creates pancake pandemonium and finds herself in a lot of trouble.

Few people younger than my generation will remember Heinrich Hoffmann's 19th-century book of horrific cautionary verse, Struwwelpeter, but there are echoes of the title story in Oh, What a Tangle!, the tale of Kiki, who decides one day to stop brushing her hair. As it grows increasingly tangled it accumulates a variety of interesting inhabitants until, finally, sanity prevails.

For mums who wonder why their children slam doors, flood the bathroom, hang their clothes on the floor and leave food on their plates and lights on in empty rooms, the answers are to be found in My Monster Mayhem. Your child is just trying to keep the house free from some pretty scary looking creatures.

Mum's Cronky Car is a terrible embarrassment to the children as it smokes and sputters and backfires its way to school. So the I of the story occupies her time imagining a variety of exotic forms of transport —elephants, ostriches, hippos … until one day the cronky car surprises ­everybody and a whole new world of transport opens up.

THE NAME OF THE TREE IS BOJABI by Dianne Hofmeyr, illustrated by Piet Grobler (Human & Rousseau)
There is a drought in Africa and the animals are starving. The only thing that can save them is a wondrous tree covered in exotic fruit, but the fruit is guarded by an enormous python who will not move until they can tell him the name of the tree.

The secret is held by the king of the jungle, who lives far away. Which of the animals will succeed in finding the key that will save them all?

Dianne Hofmeyr, better known for her novels for young adults, shows her versatility in this retelling of an African folk tale, exquisitely illustrated by Piet Grobler. It's a total delight!

SHORTY AND BILLY BOY: A TALE OF TWO NAUGHTY DOGS written and illustrated by Gerard Sekoto (Jacana and The Gerard Sekoto Foundation)
Shorty and Billy Boy make the lives of the local villagers a misery with their thieving ways.

Driven out of their home village they move to another and continue their life of crime until Billy Boy is caught and sent to jail, where he comes to realise that good deeds are the true measure of freedom.

In this beautifully produced book, the story written and illustrated by Gerard Sekoto in 1973, we see a new side to one of South Africa's most famous artists. The story is supplemented with information about the artist and photographs of some of his most famous works.

THE STORY OF HUMPHREY THE HEREFORD by Stephen Marcus Finn, illustrated by Sally Rumball (Vitruvian Press)

Published with the support of Beauty Without Cruelty, this story of the friendship between an articulate crow, a Hereford calf and two caring children is intended to emphasise the horrors of the slaughter of animals for meat and encourage young readers to be as caring about animals as they are about humans. It certainly does that.

However, my feeling is that it could have done the same thing at about half the length. I found it tediously long and the device of the crow telling the tale palled after a while.

It is means well, and one wants to find out what happens in the end, but I found myself skipping large chunks and I suspect young readers will do the same.

OLIVER STRANGE AND THE GHOSTS OF MADAGASCAR by Dianne Hofmeyr, illustrated by Rob Foote (Tafelberg)
Oliver Strange and his mate, Zinzi, are back in this, the second in the series that began with Oliver Strange and the Journey to the Swamps.

This time our hero is in the company of his father, whose kidnapping in the first book led to Oliver and Zinzi's adventures in the Okavango. So dad is safe … or is he?

Again, much suspension of disbelief is called for as the two youngsters encounter pirates, environment wreckers, people traffickers … and, of course, a variety of fascinating animal and plant life.

Dianne Hofmeyr knows how to tell a good story, brilliantly evoking the environment in which she sets the adventures. It's a page-turner.