R&D in SA: No rhythm, only blues 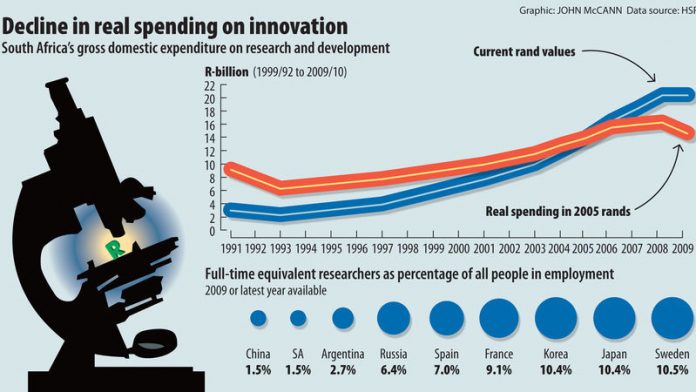 Conducting your own research and development (R&D) and owning your own intellectual property is a core competitive advantage and the days of licensing and buying foreign technology are over, says Roy Marcus, director of the Da Vinci Institute for Technology Management.

However, a recent survey into South Africa's R&D landscape shows that companies are not investing in technology development.

For the first time in more than a decade, funding for R&D decreased in 2009/10, taking South Africa even further away from the elusive target of spending 1% of gross domestic product (GDP) on R&D.

Even more worrying was the fact that the decrease occurred mainly as a result of a reduction in business R&D spending.

R&D spending is considered an important measure of a country's ability to compete internationally, offer new products and grow, which links into an increased capacity to create jobs.

SA can't compete on equal footing with developed countries
The average for Organisation for Economic Co-operation and Development countries was 2.4%.

South Africa cannot compete on an equal footing with developed countries, which have less immediate societal problems and larger GDPs, but it is also being outstripped by other emerging countries.

The percentage of its substantially larger GDP that China spends on R&D is more than double South Africa's. In many ways, this leaves South Africa on the technological back foot.

If R&D drives business growth, why is industry spending less on science? Business's contribution declined five percentage points, while the other main R&D sectors — government and higher education — both increased one and four percentage points respectively.

Those five percentage points equal about R1.2-billion, with business's spend falling from R12.3-billion to R11.1-billion.

When asked about this decline, department of science and technology director general Dr Phil Mjwara said: "Our view is that it is probably an indication of the difficult times that everyone is feeling as a result of the 2008-2009 recession."

Unexpected decline
David Kaplan, an economics professor at the University of Cape Town, said the decline in R&D expenditure was not unexpected. It was part of a larger trend of declining investment in the country.

"Business-sector investment in general — and R&D is one form of investment — has declined.

"If we look at the manufacturing sector, which is the largest sector undertaking R&D and accounts for close to 40% of business expenditure on R&D, overall investment measured as gross fixed capital formation declined between 2008 and 2009 by 19% in nominal terms and increased only marginally between 2009 and 2010."

In this context, he said, business expenditure on R&D held up rather well. The problem was an overall reluctance to invest in South Africa.

Marcus believes the problem is more endemic than a lack of confidence in the South African market, there is a lack of faith in South African-made products in general.

"We still have the sad reality that, even in the government, we do not have confidence in home-grown technology. We would rather place an order for overseas technology than from our own companies."

Local technology more expensive
The numbers support this sentiment. While the days of licensing and buying foreign technology are over, South Africa has not cottoned on to this international trend.

The country's balance of payments for royalties — which is the difference between the money coming into the country for licensing of our technology and products and the money that South Africa pays to international companies to use their intellectual property — was $1.6-billion in 2008, according to World Bank development indicators.

Marcus suggested that companies and the government be encouraged to procure locally through incentives similar to black economic empowerment, in which they receive a local technology ­procurement rating.

"You might have to pay more for local technology, but the spin-off is much greater in terms of company and job creation, among other things," he said.

The science and technology department has introduced tax incentives to encourage local companies to undertake R&D, but the take-up has been slow.

"Working together with our colleagues from the national treasury, we have been trying to reduce the administrative burden on R&D tax incentives to encourage companies [to undertake R&D]," Mjwara said.

Mining, an area in which South Africa has a technological advantage and which does a great deal of R&D, has now been included in the revised incentives.

Godfrey Mashamba, the chief director for investment in the department of science and technology, said earlier this year: "All eligible R&D expenditure will qualify for an ­automatic 100% [incentive]."

However, Marcus said that many South African companies did not know about the tax incentives and, even with the incentives, the country was not as R&D hospitable as others, which had even more impressive tax breaks.

The government is not blind to the declining business R&D investment in the country.

The 2010 ministerial review of the science, technology and innovation landscape, published last year, said: "Private business/industry is the most important source of finance for, and performer of, R&D, and a key strategic partner for government to engage with in promoting R&D investment in the country."

However, there were only two business representatives on the panel involved in drafting the review, highlighting the disconnection between the government's acknowledgement of industry's role and its engagement with industry.

It also included the rather reductive recommendation that "everything possible must be done for South Africa to become the preferred destination on the African continent for R&D-related foreign-direct investment".

Steps are being taken to try to bridge the chasm between business and government.

In July, the department of science and technology will be holding a multi-stakeholder forum in Limpopo.

It is expected to be the largest meeting of private and public-sector players to discuss ways to improve South Africa's R&D spending and increase activity in the country.

This sector, with the second-largest share of research money, grew from 11.5% to 15.7% of R&D business spending, showing the growing profile of technology usage by ­businesses in South Africa.

But manufacturing remains the research mainstay of business, accounting for 18% of industry R&D spending, which amounted to R2-billion in 2009-2010.

The greatest loser between 2008-2009 and 2009-2010 was the construction sector, in which spending plummeted seven percentage points, from R1.3-billion to R367-million.

Local business spends most of its money on experimental research rather than basic or applied research, which involves using existing knowledge to create a new product, process, or way of operating.