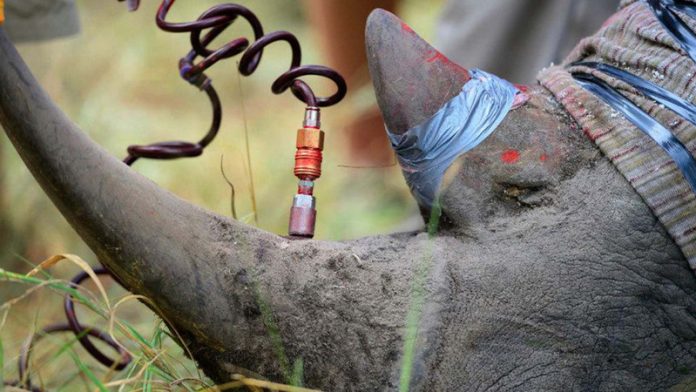 What do gold, platinum and rhino horn have in ­common? They are among the most expensive materials in the world – and rhino horn is the leader of the group.

In late 2011, according to National Geographic, the street price of rhino horn in Vietnam was between $33 and $133 a gram. In South Africa, it currently costs about $65 a gram, three times more than a whole South African white rhino.

No wonder rhino poaching is ­continually increasing, with 333 South African rhino poached in 2010, 448 in 2011 and 668 in 2012. The South African government's latest statistics show that, by the end of last month, 394 rhinos had been poached in the country.

This high demand for rhino horn is not new. In many Asian countries, especially in Vietnam, rhino horn powder is used to "cure" diseases such as cancer, to treat hangovers, improve concentration and as an aphrodisiac. However, there is no scientific evidence that it works.

In South Africa, according to the wildlife trade monitoring network Traffic, more than 50% of Asians caught in connection with rhino poaching last year were Vietnamese citizens.

The Rhino Rescue Project (RRP) was established to stop rhino poaching pre-emptively. Its founders, Ed and Lorinda Hern of the Rhino and Lion Nature Reserve in Krugersdorp, and veterinarian Charles van Niekerk, developed a device that injects red dye into rhino horns – the same type of indelible dye that is used to ruin stolen bank notes and tag bank robbers.

RRP spokesperson Lorinda Hern did not want to divulge the name of the product for security reasons, but it is similar to industry products such as Disperse Red 9, also known as 1-methylamino anthraquinone.

Disperse Red 9 is a red powder that, when combined with water, will turn into a highly visible purple liquid. That liquid cannot be washed off with water, soap or alcohol.

The infusion device soaks a rhino's horn under high pressure. Unlike other horns, rhino horns do not have a bony core but consist entirely of keratin. These fibrous scleroproteins are bundled up like very tightly pressed hair and they form a very tough horn.

Thanks to this fibrous anatomy, they can be soaked with the dye from the inside without it being noticeable from the outside.

One member of the RRP task force is always a veterinarian who supervises the whole procedure and immobilises the rhino before the procedure begins. South African vets use etorphine, widely known as M99, to immobilise the rhino. Etorphine is an opioid that is between 1000 and 3 000 times more potent than morphine.

According to a paper by Markus Hofmeyr, the head of veterinary wildlife services at South African National Parks, M99 is routinely used for drugging white rhinos.

Drilling holes and infusing dye
After a white rhino has been anaesthetised, Van Niekerk and his team drill a hole in each of the rhino's horns, using a standard drill. The red dye is pre-dissolved in a metallic cylinder that is just over half a metre high and has a diameter of about 10cm.

The cylinder is then connected to the holes in the horn using rubber hoses that are equipped with valves. The red dye is hydraulically pumped into the horn until its fibrous structure is completely soaked from the inside.

From the outside, the horn looks exactly as it did before. The process takes about 20 minutes and costs about $900 a rhino.

White rhinos are the heaviest of the five extant rhino species, with males weighing more than 2000kg on average and females around 1600kg. Because of their enormous mass, the conservationists need to roll the immobilised animal over every seven minutes during treatment, otherwise its internal organs will be squashed by its own body weight.

They also block the rhino's ears with cotton wool to reduce its stress level during the drilling.

Poisoning consumers
Unlike dye packs, a treated rhino horn does not react chemically or explode. It does, however, show up on x-ray airport security scanners, even after it has been ground down to a powder. Combine this with an illness-inducing ectoparasiticide and the horn is practically useless to poachers because it cannot be sold.

Van Niekerk's device delivers a mixture between the bright pink dye and an ectoparasiticide that is normally used for protecting rhino against ticks.

In this case, however, the purpose is to poison rhino horn consumers. If they consume RRP-treated horn powder they will suffer from severe nausea, stomach aches and diarrhoea.

The effects are nonlethal, but harmful to humans, which has sparked a debate over the ethical correctness of the procedure. Is it ethically justifiable to poison already-ill people who have been tricked by rhino horn traders?

Fighting poachers
There are other anti-poaching techniques, but most of them are reactive and cannot prevent the poaching in the first place. Typically, private reserve owners rely on anti-poaching units – armed troops that comb their reserves on foot or with helicopters or quad bikes. Their patrols sometimes end in violent encounters with the poachers, as at the end of March this year, when three alleged poachers were killed by Kruger National Park game rangers.

Another controversial option is dehorning the rhino. During the procedure, they are sedated and their horns are cut off using chain saws. The animals are not hurt. The treatment costs between $620 and $1000.

London-based charity Save the Rhino International reports that only between 90% and 93% of a rhino's horn is cut off during the procedure. What is left behind is a stub that is still of interest to the poachers. According to Save the Rhino, two years ago in Zimbabwe six rhinos were killed for their stubs shortly after they had been dehorned.

As drones are making their way into civil use, some game reserve owners are now also using them for game surveillance.

At the end of 2012 the World Wide Fund for Nature received a $5-million grant from Google to buy and develop state-of-the-art surveillance systems, including drones. These are being tested in Namibia, South Africa and Nepal, using human-piloted drones, not their fully autonomous counterparts.

Every 60 seconds an implanted device reports its host's position and an analysis of its movement. Did the rhino run fast? Did it sleep for more than six hours in a row?

The ProTagTor device would interpret this as unusual behaviour and send a report to a central receiving station, which, in turn, would alert nearby game rangers. Upon the owner's request the RRP team can also insert GPS chips to track the rhinos.

What now?
So, what can be done to fight the rhino slaughter in South Africa? Despite the anti-poaching technologies used, 2013 is on its way to hitting a new poaching record. Van Niekerk's anti-poaching treatment is simple yet impressive, but in order to become fully effective, awareness must be raised among horn consumers, because they are the ones driving the demand.

This article was first published in a Scientific American blog