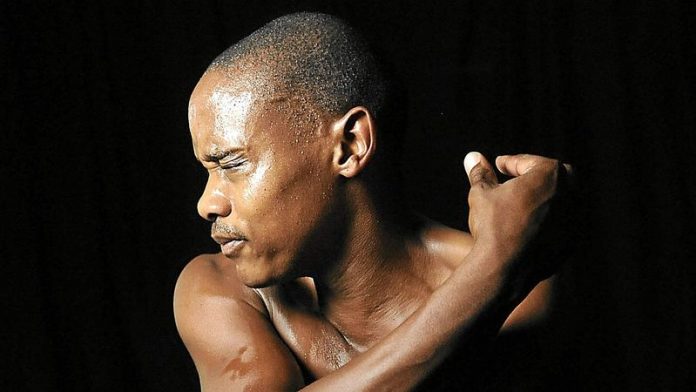 Fana Tshabalala has just finished watching YouTube videos of the post-war Japanese dance style butoh. The first performer of butoh is believed to have been Tatsumi Hijikata who, at a festival in 1959, performed a mesmerising dance, called Kinjiki, which featured themes of homosexuality and paedophilia.

He shocked audiences when he strangled a live chicken on stage. Covered in white paint while performing slow, grotesque movements, he wanted to express his seditious views about the conservative, traditional Japanese contemporary dance scene. His performance was treated with contempt and he was banned from the festival.

Why would Tshabalala watch it? The winner of the coveted Standard Bank Young Artist award for dance will be performing at this year’s National Arts Festival and he is looking for inspiration to solidify his piece.

Although not as radical as Hijikata, Tshabalala is certainly on his way to breaking the traditional conventions of contemporary dance. His affinity for pushing boundaries was evident from the beginning of his career when he auditioned for entry into the Moving into Dance Mophatong training college with experience only in traditional Zulu dance.

“I didn’t know what I was doing but I pushed myself. I was standing forward doing whatever, and when every­one was going right and I was going to the left, [but] they saw something in me,” he says.

His passionate performance gained him entry and his career has flourished ever since. His works such as Conversations between He and He, Une Rupture and Gates of Hell have enjoyed acclaim.

Tshabalala is choreographing a dance piece called Indumba for the festival. His cast, which includes himself, has been training hard for the past six weeks but he has been researching its content since last year. He went to Mozambique after reading Paul Granjon’s paper on the cleansing ceremonies that were done after the civil war. The journey changed his perception of life, dance and the ritual.

“When I went there, I wanted information which they couldn’t give me because they had no idea what happened. It was only a few people who knew,” he says.

He explored further and went to a rural village near Manyisa. “When I went there, I met people who have nothing. When I sat down with the chief, he didn’t even speak of tradition. He kept on talking about the system that was always oppressing him. That process was like a cleansing ceremony for me. I knew that I must appreciate everything that I have because, out there, there are people who have nothing.”

This is a reality he has also observed in his home district of the Vaal (he was born in Sebokeng in 1987) — he has noticed the people of his ­community feel a hopelessness that manifested itself as anger.

How could he show them they could cleanse themselves from negative feelings and thoughts?

rituals that we do on an everyday basis. Coming [to the dance studio] every day has become a ritual for me and dancing is a cleansing ceremony.”

He suggested this idea to his cast and incorporated it in the dance. “I asked them what makes them angry and then we created our own indumba where we can be open with ourselves. I wanted to create a space where, as performers, we can create our own indumba and what it means for us.”

Tshabalala displays deep insight into how the spiritual can become political and achieve a collective catharsis for a traumatised nation, which the Truth and Reconciliation Commission and the new democratic government have failed to do.

“I come from a very poor background and every time I go back home I feel like people have nothing. The situation is getting worse … They don’t have work while others are getting filthy rich, driving expensive cars … The system is controlling and failing us at the same time.”

His performance promises to be a climactic release of repressed anger, something Hijikata would be proud of. But what makes him angry?

“The world today and the system that is driving us, because I feel like I don’t have a voice anymore and everything has been decided for me.”