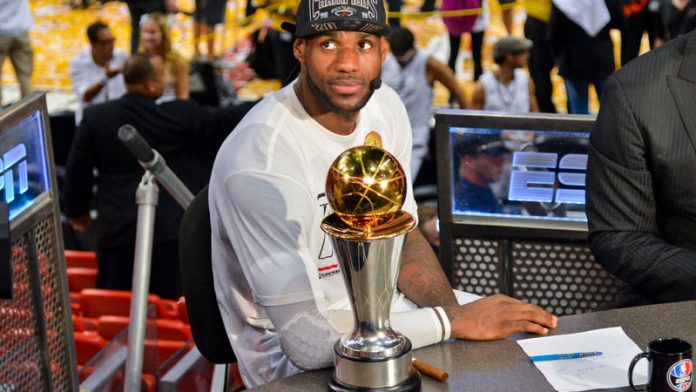 James's points tally on Thursday was the highest in a Finals Game Seven in 44 years since Jerry West's 42 for the Los Angeles Lakers against the Boston Celtics in 1969 and his display was worthy of a player now widely viewed as one of the greatest to have played the game.

"It feels great. This team is amazing and the vision that I had when I decided to come here is all coming true," said James, who joined the Heat in 2010 after five seasons with the Cleveland Cavaliers.

"Through adversity, everything we have been through, we have been able to persevere and to win back-to-back championships. It's an unbelievable feeling."

James crowned his performance with a key jump shot down the stretch that put Miami in command at 92-88 with 27.9 seconds left.

The four-times league MVP then grabbed a steal off a Manu Ginobili attempted pass to Tim Duncan to ensure the win. Duncan fouled him and James then sank both his free throws.

Miami had trailed 3-2 in the series before coming back to South Florida for the final two games and James found his scoring form at the perfect moment, making 32 points in the dramatic Game Six overtime win.

James, strangely unpopular with many NBA fans, was heavily criticised in the media for his performance in Miami's 2011 Finals loss to Dallas but came back to win against Oklahoma last year and termed this season's triumph as a greater achievement.

It didn't all go James's way in the series – he didn't break 20 points in the first three games of the Finals as San Antonio's defense foiled his attempts to drive and get into the paint.

But LeBron's talent and skills are matched by an astute tactical brain and he realised that with a Spurs defence reducing his chances of lay-ups, he needed to trust his shooting from distance.

"I watched films and my mind started to work and I said, OK, this is how they are going to play me for the whole series. I looked at my regular season and postseason stats and I was one of the best mid-range shooters in the game. I shot a career high from the three point line.

"I just told myself – don't abandon what you have done all year. Don't force the paint. If it is there – take it. If not, take the jumper," he said.

Alongside his outstanding mid-range shooting, James also shot five three pointers – a career best for him in an NBA Finals series game.

Work ethic
For Miami coach Erik Spoelstra, LeBron's devastating jump shots in Game Seven were the fruit of the player's conscious decision to improve that element of his shooting game.

"We all know his work ethic. It is probably unique for a guy who has been the best in the game since he was in seventh grade, usually you wouldn't have that type of work ethic that would match that type of talent," he said.

"But as the series went on, he realised that was probably going to be the shot that was going to be open and in the biggest game, the biggest moment, those are the shots that he hit and those were the difference tonight".

James had little time off following last year's championship win – heading to London to help the United States win Olympic gold – and he said he now needs to rest his body fully this off-season.

But it is hard to imagine the 28-year-old doesn't have several more memorable seasons and triumphs ahead of him.

"The story has yet to be seen what he is going to end up with," said team-mate Dwyane Wade.

"He is a special player. What he brings here every night is unbelievable."

James answered his doubters
As always James, sidestepped questions about his critics, many who had argued he lacked the ability to deliver in the biggest moments.

But for the man who engineered his move to Miami three years ago, Heat president Pat Riley, James has more than answered his doubters.

"They don't understand the game. We live in the world of immediate blame and immediate praise and they're always going to take a shot at the guy at the top of the mountain.

"LeBron is the greatest player in the world, one of the greatest leaders I have been around. He deserves everything that he gets right now," he added. – Reuters

Which team will be crowned the 2021 NBA Champion?