Mandela: I will rest in Qunu 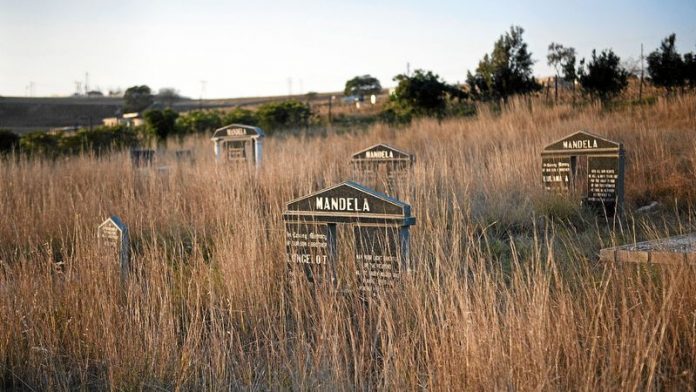 Former president Nelson Mandela never gave detailed instructions for his burial, but nearly 20 years ago he made his general wishes clear: he wanted to be buried in Qunu, and he wanted to keep things simple, even while recognising that his funeral would inevitably be a state affair.

And it seems that Mandela stuck to his wish for simplicity, although details of his latest will are not available.

Those instructions provide the clearest insight available into Mandela's own wishes on what should happen after his death, well before the Presidency and family started making arrangements for that eventuality, and well before the family this week apparently fell out about the details of those arrangements.

In January 1996, Mandela gave three broad instructions with regard to his burial. He did not want any interference with a state memorial service and various associated ceremonies; he wanted to be buried in his ancestral home of Qunu in the Eastern Cape, rather than in a more prominent location in the capital; and he wanted a grave marker of simple stone on site of his grave.

At the time Mandela was 78, and still held the office of President. While it is possible that his wishes may have changed over the following years, he included those wishes in subsequent wills, and those close to the Mandela family say it is unlikely.

"He never gave death a great deal of thought, but he never wanted anything fancy," said a family friend of long standing.

Funeral instructions
Such an attitude is corroborated by papers that were placed before the courts during disputes around the sale of artworks bearing Mandela's signature, including wills drafted from 1995 onwards. Although the actual disposition sections of the wills were redacted to guard Mandela's privacy, each version presented occupied no more than a single A4 page – for a man who, in the early 2000s, held cash in South Africa and abroad amounting to at least several million US dollars.

Wills of even moderately affluent people are typically many times that length, with funeral instructions alone often running to several pages.

Mandela's wealth at the time mostly flowed from the sale of his books and various pieces of memorabilia, including artworks bearing his name. Various business people also established initiatives intended to provide for Mandela in his old age, and to ensure the wellbeing of his family after he left office.

The money raised in those initiatives now mainly resides in family trusts. Control of those trusts is currently a matter of dispute.

Though not among the wishes expressed by Mandela himself, a source close to the family this week said the intention was to create a garden of memory in Qunu, one that could satisfy the expected need for a place of pilgrimage for tourists without necessarily opening Mandela's grave itself to the public.

Graça Machel has not been involved
But plans around both the specific grave site and the garden project appears to have suffered from internal family disputes, delaying final decisions, even amid widespread recognition that the matter is now urgent.

Though technically Mandela's next of kin, his wife Graça Machel has not been involved in the disputes – or in decisions around Mandela's burial – according to well-placed sources. Though Mandela lived in Houghton in Johannesburg until his most recent hospitalisation, Machel maintained her own home in nearby Sandton. However, during his hospitalisation in Pretoria she stayed at his bedside, or slept in the hospital, the only member of the family to stay in such close proximity to the ailing elder statesman.

Much of the decision-making within the family appears to have devolved to Mandela's daughter Makaziwe, who has consolidated her control over what has at times been a fractious extended family.

Makaziwe and her sister, Zenani Dlamini, in March launched a joint application to remove advocate George Bizos, lawyer Bally Chuene and housing minister Tokyo Sexwale as directors of Mandela-linked holding companies. However, Dlamini is the ambassador to Argentina and Paraguay, and she this week returned to her post in South America even as her father was in a critical condition in hospital, leaving Makaziwe to deal with family matters at home. Between them, insiders say, they wield more influence than ANC MP, chief Mandla Mandela, the grandson of Nelson Mandela, who has struggled to maintain the respect of elders and family amid divorces and claims of infertility and infidelity even though he is, technically, the family patriarch.

'Strictly a family sacred place'
"Makaziwe and Zenani are effectively the heads of the family now," said a source close to the family this week. "Zenani brings in Winnie [Madikizela-Mandela, Nelson Mandela's former wife] and Makaziwe is very close to Lindiwe [Sisulu, minister of public service and administration]. That gives them the weight they need in the family and in government, so they can bring everyone together. The other kids look to them for direction."

In their application around directorships of companies housing Mandela assets earlier this year, the two daughters submitted powers of attorney signed by 17 others, which Zenani described as "all of the major children and grandchildren" of Nelson Mandela. Mandla Mandela was among those who effectively appointed them as his agent in the matter, although he subsequently partially retracted his support.

In a rare interview on Thursday, Makaziwe indicated that Mandela's grave will likely be considered private, and will not be opened to visitors.

"Family grave yards … they're not for public," she told the state broadcaster. "They are for public once when you've buried a loved one and you invite people to that. And that is the end. After that it becomes strictly a family sacred place."