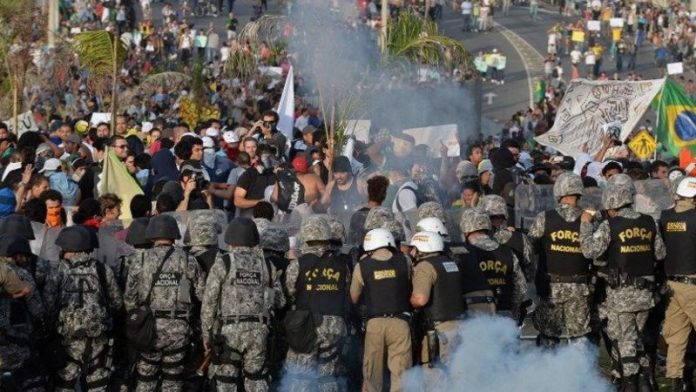 Sunday's Confederations Cup final between Brazil and Spain at Rio's Maracana stadium was set to be played out against a backdrop of protests as citizens answer calls on social media to demand better public services.

More than 11 000 police and troops were mobilised in the city to guarantee security for 78 000 fans at the venue as the curtain falls on a competition that has been beset by social unrest with more than 1.5-million people taking to the streets across the giant nation in the past two weeks.

Protesters are frustrated the government has found millions for brand new stadiums in several of the dozen 2014 venues while public services such as transport, education and health are struggling for investment.

Some of the demonstrations – 300 000 marched in Rio ten days ago – have ended in sporadic violence, but the disparate groups calling for people to gather Sunday have urged supporters to march peacefully and not resort to vandalism.

Police have asked legal observers to attend amid claims by some marchers their response is often heavy-handed – they have regularly deployed tear gas and rubber bullets at the demonstrations to date.

Leftist President Dilma Rousseff was not due to attend the match.

She was in place for the opening match in the capital Brasilia on June 15 but was subjected to a storm of booing as she took her seat alongside Fifa president Sepp Blatter, who was also booed.

Blatter was expected in Rio after first attending the third place playoff encounter between Italy and Uruguay earlier Sunday in the northern city of Salvador.

Despite the protests at often chaotic public services — the unrest began in business hub Sao Paulo and Rio at the rising cost of public transport – polls show more than two-thirds of Brazilians do support the World Cup being held in the country for the first time since 1950.

Brazil is the most successful country in World Cup history with five triumphs.

In the Confederations Cup, the Selecao are gunning for a third straight title and fourth overall, whereas Spain have yet to lift the trophy.

Although Spain are the form side of recent years, the hosts insist they can deny the world champions.

"Spain are spectacular – but like any team they have their faults," Brazil coach Luiz Felipe Scolari insisted on Saturday.

"I don't consider Spain the favourites."

But Argentine soccer legend Diego Maradona was standing behind Spain.

"These are two giant teams in the world," Maradona told reporters through an interpreter in Jakarta, where he is coaching clinic activities.

"At the moment Spain is better than Brazil but don't forget Brazil is the host. The game will certainly be exciting," he said.

"I support Spain more than Brazil. So Spain will win tonight," he added.

The finalists have only met on eight occasions before: Brazil winning four to Spain's two with two matches drawn.

Their most recent encounter was a 1999 friendly.

But if history favours the South Americans, Spain have not lost a competitive match in 29 games, since their shock reverse to Switzerland at the start of the 2010 World Cup.

Since winning the Euro 2008 tournament, breaking a trophyless streak dating back to 1964, they have swept all before them.

The last time the two sides met in a match with anything at stake was in the early stages of the 1986 Word Cup. Brazil won by a single goal in a match in which Spain had one effort controversially disallowed.

Scolari sees a positive omen in the date of Sunday's match: June 30 is the date his old Brazil side won the 2002 World Cup. – Sapa-AFP