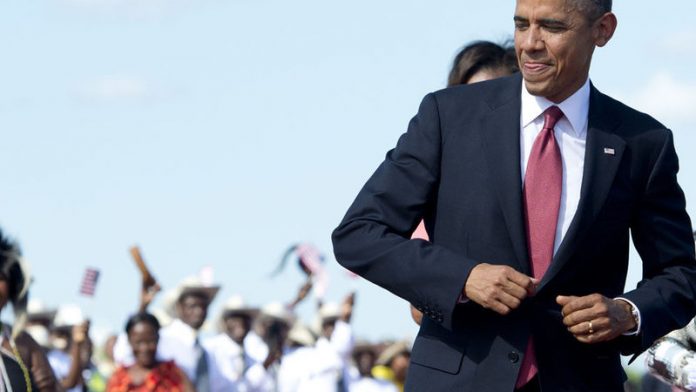 The two leaders will join together on Tuesday in Dar es Salaam for a wreath-laying ceremony at the US Embassy, in honour of a bombing there in 1998 that killed 11 people. They'll also meet with staff at the embassy.

Obama arrived in Tanzania on Monday on the final leg of his three-country tour of Africa. His Republican predecessor coincidentally also plans to be there for a conference on African women organised by the George W Bush Institute.

First Lady Michelle Obama and former first lady Laura Bush also plan to team up at the conference on Tuesday for a joint discussion on promoting women's education, health and economic empowerment.

Meanwhile, Obama warned on Sunday that Africa could only fulfill its destiny with leaders who strive to improve the lives of their people and said that his stop in Tanzania is intended to boost a democracy viewed with approval in Washington.

He will be hot on the heels of Chinese President Xi Jinping, who included Tanzania on his first overseas tour in March.

Talk of an economic rivalry in Africa between Washington and Beijing has been a theme of Obama's trip.

Africa's electric power
On the second-leg of his tour in South Africa, Obama spent the weekend paying homage to Mandela – the political hero who drew him into politics, on an ascent that led him to become the first black president in America.

He decided not to visit Mandela, who lies critically ill in a Pretoria hospital, but paid repeated tribute to his legacy, painting him as one of history's most important political figures.

In Tanzania, Obama will hold talks and a press conference with President Jakaya Kikwete and visit the Ubungo power plant, after unveiling a new $7-billion programme to enhance Africa's electric power networks.

Former president George W Bush, feted in Africa for his HIV programme, which saved millions of lives, is also in Africa at the same time as Obama.

In a speech at the University of Cape Town, Obama slammed those who "steal or kill or disenfranchise others", saying that the ultimate lesson of South Africa was that such brutal tactics will not work.

"So long as parts of Africa continue to be ravaged by war and mayhem, opportunity and democracy cannot take root," said Obama at the time.

He also condemned the rule of Robert Mugabe in neighbouring Zimbabwe, where he said the "promise of liberation gave way to the corruption of power and the collapse of the economy". – Sapa-AP, AFP