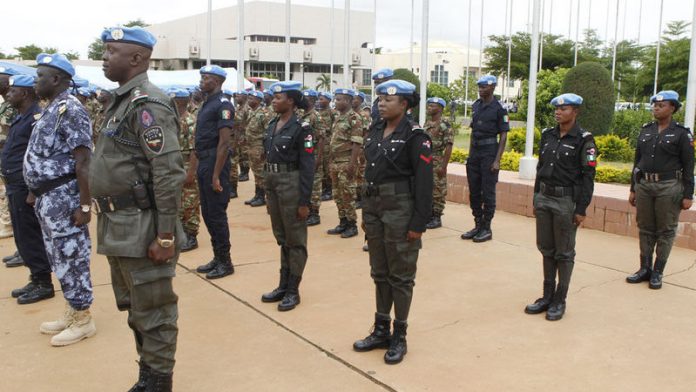 A 12 600-strong force officially on Monday replaced the Afisma military mission, which has been supporting French soldiers who entered Mali in January to halt an Islamist advance and to help the government re-establish its authority over the vast country.

Soldiers from troop-contributing West African countries and UN officials took part in a "re-hatting" ceremony in Bamako on Monday, replacing their head gear with the distinctive light blue berets of the UN.

France is winding down its deployment from its peak of nearly 4 500 but is to keep up to 1 000 troops in Mali and will maintain responsibility for military strikes against the Islamists.

"I want to thank Afisma for all their work. Our mandate is to secure the major cities of the north, the protection of civilians … political mediation and the protection of the rights of men and women," said Bert Koenders, the UN secretary general's representative in Mali and the head of Minusma.

The force is made up largely of Africans already stationed in Mali but China has offered to supply more than 500 troops in what would be its biggest contribution to UN peacekeeping.

The mission is due to play a key role in presidential polls announced for July 28 but the election commission has raised doubts over its ability to stage a free and fair vote with such short notice.

"This is impossible when you look into the abyss we're emerging from, but they won't throw us back into the crisis [in which] we paid a heavy price," he added.

The election commission's president Mamadou Diamountani said last week it would be "extremely difficult" to get up to eight-million voting cards to the electorate in a country where 500 000 people have been displaced by conflict.

He also highlighted the instability in the north-eastern town of Kidal, which is occupied by Tuareg separatists and still has no army presence despite a ceasefire between the transitional government and the rebels.

But the ethnic-Tuareg National Movement for the Liberation of Azawad (MNLA) in Kidal said on Saturday that "nothing justified delaying" the poll.

Malian military officers staged a coup in March last year, but the weak army was overpowered by the MNLA which seized key northern cities before being sidelined by its al-Qaeda-linked allies.

The MNLA sided with a French-led military intervention which reclaimed most of the lost territory from the Islamists.

'Logistically challenging missions'
The UN has called on member states to contribute critical resources to ensure that it can support Mali in implementing a ceasefire accord with the MNLA and preparing for the elections.

UN officials have acknowledged that the peacekeepers face the threat of guerrilla attacks and will encounter a number of logistical difficulties in northern Mali's harsh environment, where water is scarce and temperatures soar above 40 degrees Celsius.

Under-secretary-general for field support Ameerah Haq called it "one of the most logistically challenging missions the United Nations has ever launched" but said planning was on track. – AFP